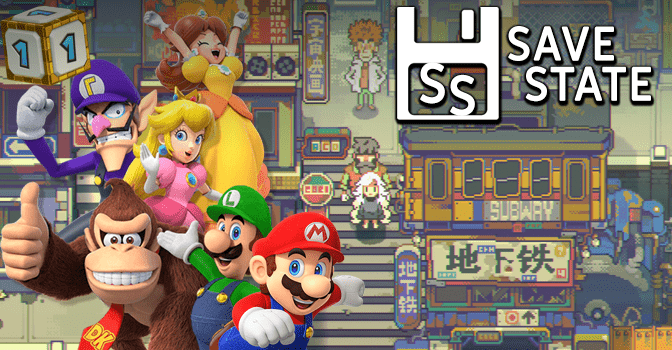 Welcome to Save State, where we party hard, but shred harder. One interesting thing about the holiday season is that people are more willing to travel, more willing to decorate with the colors red and green, and are more willing to shell out cash for unnecessary goods and services. In my case, it was picking up Mario Party Superstars to play with guests visiting just before Christmas. Now, I know what you’re thinking: “It’s Mario Party, how bad could it really be?” Well, actually, extremely so. For several iterations they threw everybody into the same car, severely hampering board play (in a series that originally attempted to emulate board games), and then the next Mario Party that didn’t have everyone ridin’ dirty had overly simplistic boards with no way to play a full game with other people online for something to the tune of 2.5 years. 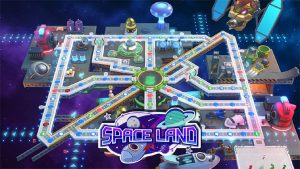 Thankfully, Mario Party Superstars is a step in the right direction for everyone’s favorite Nintendo series to hate. I am one of those people who played Mario Party heavily as a kid… on the Nintendo 64. After the 64 came and went, I wound up only really playing the series during get togethers with friends of mine who owned the later titles. Mario Party 6, for example, was a game I never owned but I knew I’d always have a great time playing- the board selection and day/night system made for some great, chaotic fun. I fell off hard with the series after Mario Party 8- so a Mario Party game that consists of throwbacks to the halcyon days of the series is a big hit for me. Thankfully, it was with my friends, too. 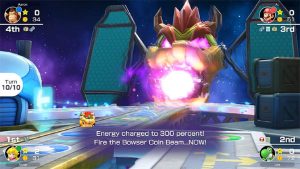 If you don’t know what Mario Party is, it’s a game series quite possibly forged in the bowels of hell by the gods of chaos. Player movement is dictated by dice rolls, and your primary goal is to build up coins that you can spend to acquire stars by traveling to wherever Toadette is on the board. Stars are the most valuable currency in the game because the person who has the most of them when all turns are up is the winner. To build the economy, after all four players move a minigame starts, and the winner(s) of the minigame will earn coins, so generally you will want to perform well in minigames so you’ll have enough cash to pay the star dealer. 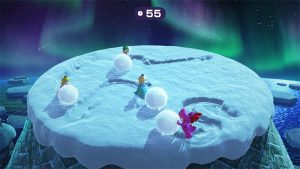 Mario Party Superstars consists of a variety of minigames from all across the history of the series (with no motion control minigames), and five boards from the first three Mario Party games. All the boards in Superstars are larger than ones from other recent Mario Party titles, and players are back to using 1-10 dice for movement across the board instead of a smaller 1-6, like from Super Mario Party. It’s likely a small change, but I vastly prefer the larger die rolls for movement across the board as it makes items much more important for coming up with strategies on how you’ll acquire stars. 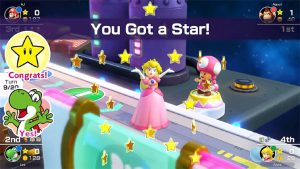 Coins can also be spent on items that have a variety of effects like doubling or tripling the number of dice you can roll, swapping players around the board, and one item even allows you to steal stars from other players. In Superstars you can hold three of these bad boys, and unlike Mario Party 2, if you get a Skeleton Key you can actually throw it away if you don’t need it, this time. Some items only commonly pop up in later turns of the game, functioning kind of like comeback mechanics, like the Golden Pipe that can warp you right to Toadette to buy a star, though players who anticipate the last 5 turns can get to shop and buy one themselves, if they’re already in first place. 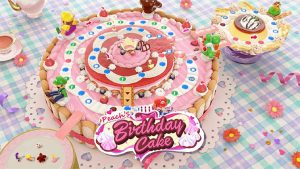 Mario Party Superstars lets you control a variety of options like what groups of minigames you’d like to play. Skill-based minigames, for example, are the ones that usually require player input and reward the player who plays the best, though there are still several in that group that require some considerable luck. There’s also a family minigame grouping, and more, which really helps as the quality of minigames present in Superstars is pretty great, overall. Being able to play against people online and spam stickers during key moments to congratulate other players (or be toxic, I don’t know your life) can be really entertaining. Superstars is, strangely, missing a team play option which is basically all I would have wanted for the game to be “complete,” though I’m sure a lot of people who rigorously kept up with the series over the years could probably come up with more features or mechanics that would improve Superstars substantially. For an old man getting with some friends for some fun over a weekend, however, I’ve been surprised at how much I’ve been playing the game after the get-together was over.

So, Mario Party is a lot of fun, I’m sure you agree, but that wasn’t the only thing being played these last couple weeks. A game I found in my Steam library recently was a little title called Eastward, released back in September. Eastward is a pixel graphics RPG with gorgeous animation and excellent attention to detail, and probably one of the more interesting indie titles to come about in 2021. 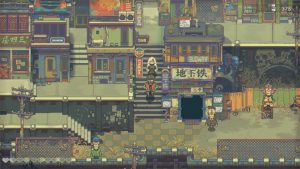 I imagine some players may not like the narrative, but the visual style, character animations, and soundtrack weave together an excellent presentation that sells the dialogue very, very well. If you’ve ever wanted to play a game where you wield both a frying pan and magical powers simultaneously, then Eastward is probably the first game since Super Mario RPG where you can do so (shout-out to my homies Princess Toadstool and Geno). Eastward’s combat is more akin to top-down Zelda games like Link to the Past, or even Secret of Mana, than it is old school Final Fantasy or Dragon Quest. You move around enemy attacks and bonk them with your frying pan in real time, not in turn-based combat (there’s also a gun, but outside of a few select instances, I did not enjoy using it at all). 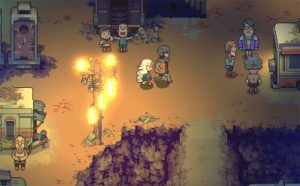 While your two protagonist characters venture ever-eastward, you’ll run into a wide variety of colorful characters, beautiful environments, and even minigames with which you can pass the time. You’ll wander through a wide variety of locations and will have powers that might be useful in combat and while solving puzzles, and encountering a new location is always a joy because that will mean a new place to explore that also had a rigorous attention to detail in its design. Everything in Eastward looks great- whether it be the buoyant animations of a supporting character, or how objects you pass by have a glint of light to show you, the viewer, that it’s a metallic object you just passed. I’m a real sucker for pixel art done well, and Eastward blew almost every other game I can think of out of the water in this regard. 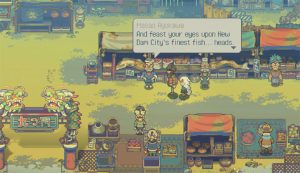 There are a variety of side quests you can do as you complete the game, but a number of them are fetch quests that will have you journeying back and forth across the world. Thankfully, you can break up fetch questing with furthering the story or playing an in-game roguelike called Earth Born that is entirely optional but too good to completely ignore. Among all of the extra minigames added to Eastward, Earth Born is by far my favorite. If the game-within-a-game concept happens to grab you, expect to lose several hours just messing around with the various Earth Born terminals you encounter throughout your adventure.

Eastward is one of those games with an incredible attention to detail that could have only come out of an indie studio like Pixpil, and there’s quite a lot of “game” here too, considering it’ll probably take the average player 20-30 hours to complete it, depending on how much side content to mess with as you progress. Eastward probably isn’t the best RPG I’ve played in 2021, but it is definitely one of the ones I will remember most fondly just due to how it captured that classic RPG feel so well. 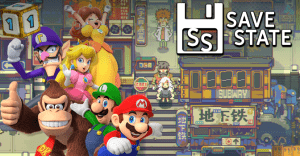 With that being said, we’re going to save and quit this edition of Save State. This Christmas Eve, take a moment to play a party game with your friends and family, and make your parents regret giving birth to you when you steal a star from them for the third time on Horror Land.

Someone has to do it, after all. Happy Holidays everyone!