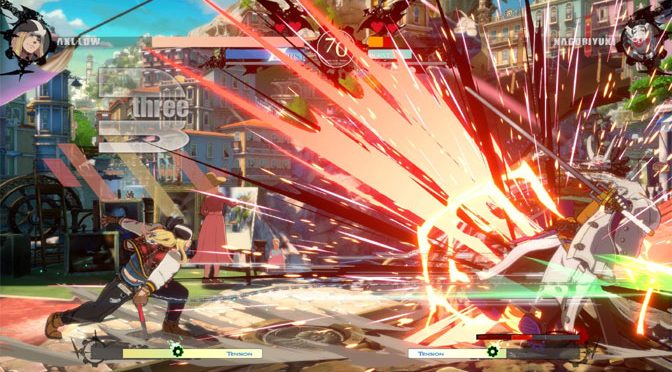 Welcome to Save State, where we talk about fighting games despite being absolutely no good at them whatsoever. It should come as no surprise, given my JRPG-playing proclivities, that I also enjoy fast paced fighting games like Guilty Gear, BlazBlue, Dragon Ball FighterZ, and Melty Blood oh whoops all of those games are by Arc System Works. My tastes are actually broader than that, but there’s just something brilliant about ArcSys games a significant portion of the time that draws me into the title. The game I’m going to talk about this week is ArcSys’s latest, Guilty Gear -Strive-, released on PS4, PS5, and PC in June of this year. 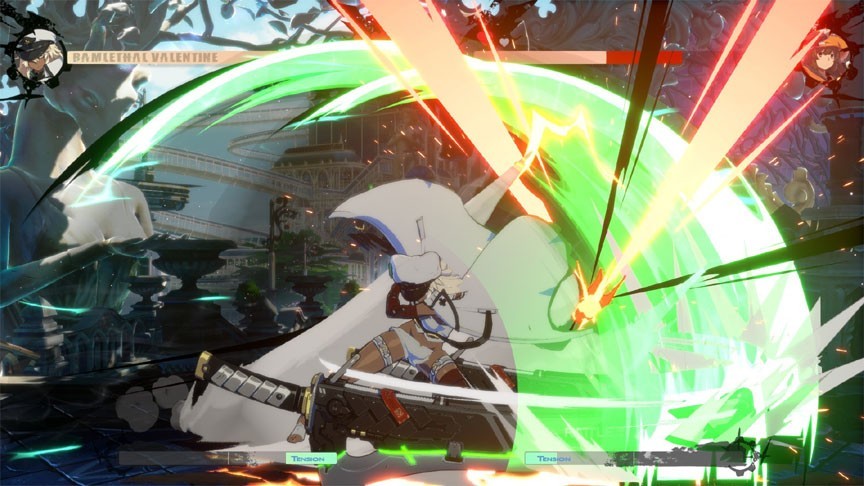 Guilty Gear’s story is one of those things that I’m not even sure I could entirely explain- it spans a large number of games from 1998 to this year, with a number of spin offs and baggage like you wouldn’t believe as it has tons of characters all with their own motives, so Strive’s story line winds up being pretty interesting should you be open to overly dramatic anime storytelling. What’s interesting in -Strive- is that the story mode doesn’t bear any interactivity with the player. It’s a series of cutscenes that you can save during- being more like a movie within a game than a game’s story told through cutscenes after gameplay. It’s a little strange, even moreso how this game picks up right after Xrd with little to no explanation of how things got to where they are (you miss one game and you’re left in the dark).

Of course, this is a fighting game, so we’re going to talk about the fighting. Most things in -Strive- should seem about the same as other games, as you have your health bar, tension meter, etc., on screen. Guilty Gear is one of those series where they reward players for being aggressive- so you can build tension by simply approaching the opponent, or by smacking them around with your normals and special attacks. The action economy of Guilty Gear is that you don’t want to spend your time running away, as that can reduce, or even completely bottom out your tension meter, and your meter gives you valuable tools you can use to apply pressure to your opponent or force them to back off of you in a pinch.

While there are still combos in the game that may require the player press buttons in almost frame-perfect windows, the insane execution barrier of XX Accent Core+’s I-No is a thing of the past. The Roman Cancel system, in which you can cancel the recovery of one of your moves by spending tension meter, makes a return in -Strive-, but the execution is a bit different here. You have access to four unique colors of clock-spinning goodness, largely determined by when you press the input. Red Roman Cancels are the ones most people would be familiar with- the one that lets you spend 50% of your tension meter to cancel the recovery of one of your attacks to extend your combos, but -Strive- introduces 3 more that can used for a mixture of both offense and defense. You can even do neat things like spend meter to slow an opponent on approach so you can get a counter hit and launch them into a combo you otherwise couldn’t do, or use one defensively to reset a match’s momentum. 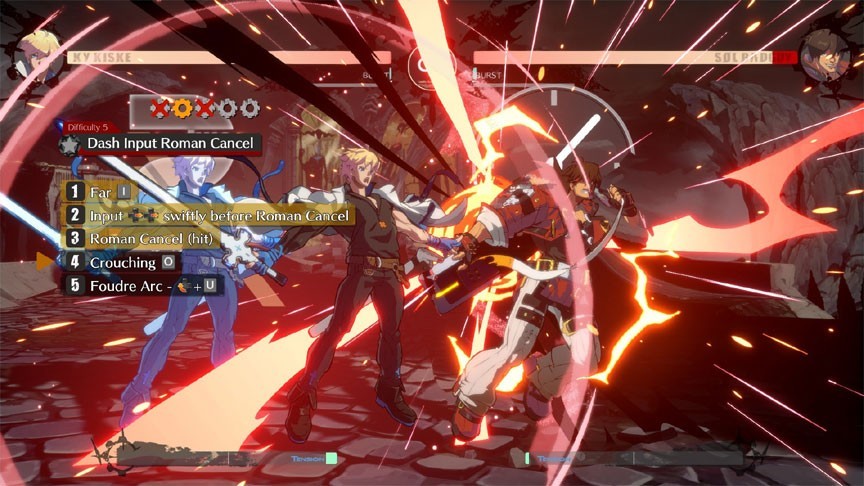 Long time players of older Guilty Gear games may have noticed that I didn’t mention the Force Roman Cancel, a high execution barrier of the older games that only cost 25% of your meter, instead of 50%, but had very restrictive 1-4 frame windows for activation. Well, the reason I didn’t bring those up is because they’re not here, they moved out, and they took the dog with them. Attempting to time a Force Roman Cancel in XX Accent Core+ R online was nigh an impossibility except on a few attacks with much more generous windows due to the delay based netcode, though I imagine that would be less of an issue with -Strive-, though more on that later.

Faultless Defense and your Burst gauge make a return, though, as your primary, “Get off me” tools, with Faultless pushing attacking foes at the expense of meter while its active, and Burst blowing your opponents away when getting slapped around. The Burst gauge also functions like in previous games where you can fire it off as a defensive tool to blow away an opponent that’s hassling you in the corner, but it can also be used offensively to hit your opponent and instantly max out your tension gauge. Knowing when and how to do this appropriately is crucial for high level play- if you attempt to gold burst for free meter, but miss, that could leave you in an extraordinarily bad position should your opponent manage to put baby in the corner (it’s you, you’re baby). 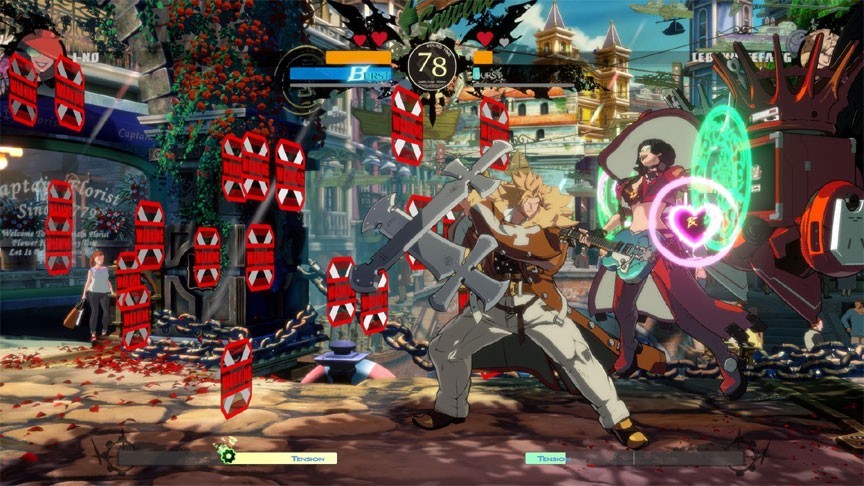 Strive is a considerable step down in execution complexity, and instead reinforces a huge focus on fundamentals. So, I’ve explained some of the differences from older Guilty Gear titles going into -Strive-, and while some are probably upset with the lower bar for entry than what previous games in the series had, a significant amount of what makes Guilty Gear special is still present. Damage is high by design, and the attacks tend to be very flashy and fun to watch. Honestly, what makes Guilty Gear so interesting is the ability to dash up and around your opponents, go for a cross-up or a poke, and then chunk them for 40-50% because they couldn’t read your intense movement. Being mindful of when it’s your turn (except Giovanna, it always seems to be her turn) and appropriately using the tools at your disposal with a lower execution barrier really makes -Strive- the easiest entry for a fighting game beginner to get into.

Notwithstanding, the characters in -Strive- are more limited than previous entries, as there are only 15 characters to start with (17, as of the time of writing, with DLC), but the characters are just as bombastic and interesting as any entry previous. Nagoriyuki is a large, vampire samurai with incredible reach, slow movement without his quick step special dash, and a vampiric thirst represented by a meter that fills the more Nagoriyuki uses his specials that gives bonuses to reach or damage when it’s high, but is devastating when it fills completely as it drains Nago’s health like crazy. Nagoriyuki is a new, powerful, mid-range character that requires careful meter management. Giovanna, on the other hand, is a Secret Service agent with a wolf spirit who can dash around like a madwoman and has a quick hit and run play style where you can dash and poke to confirm hits then slam your opponents into the corner as if you’re using Uno Skip cards to make them forfeit their turns. 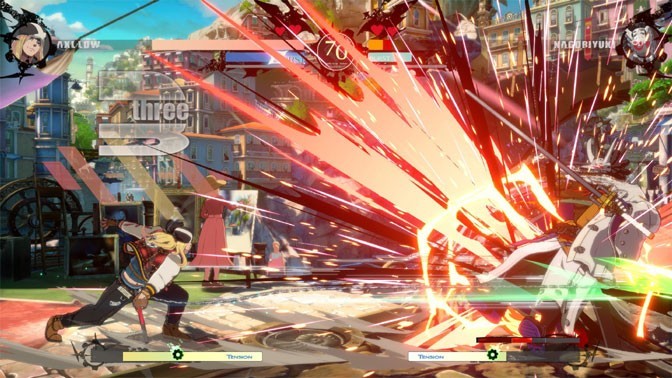 So the mechanics are simpler than previous entries, but the new characters are great, so what else might -Strive- have to offer? Well, I’m glad you asked, random Internet citizen, because this particular Guilty Gear offers some of the best tutorials in the entire franchise in its Mission mode. The Mission mode is not 100% comprehensive- in fact, some of the situations they put you in to teach you things are not situations where you’d use those skills against real players, but at least -Strive- does attempt to teach the player about the different forms of Roman Cancels, when the windows for getup reversals are, and the like. The starting challenges are all pretty easy, but later ones might take you 20+ minutes of practicing in order to get right (the invincible backdash and invincible reversal ones took me probably an hour, altogether, though I still can’t consistently perform a reversal with Sol). Interestingly, the frame window for reversals in -Strive- is actually smaller than that of Xrd or previous games, just as a note for those who complain about the lesser bar for entry in execution.

Beyond the mission mode, there’s a versus mode, training where you can record inputs and practice against them (which is extremely handy), and of course, online. There’s not really a lot that could be said about -Strive-’s online tower and celestial ranking system, as it seems pretty standard overall, but you can play with friends, you can set up lobbies, and you can play with randoms, all using buttery smooth rollback netcode that almost makes it feel as if your friend is in the room with you while they beat you mercilessly. It’s difficult to describe just how good the online implementation of -Strive- is, as doing reversals on wakeup, even with its minuscule 3 frame window, is not an impossibility while playing with someone from the other side of the country (I can’t do it because I suck, not because the online architecture is shoddy). 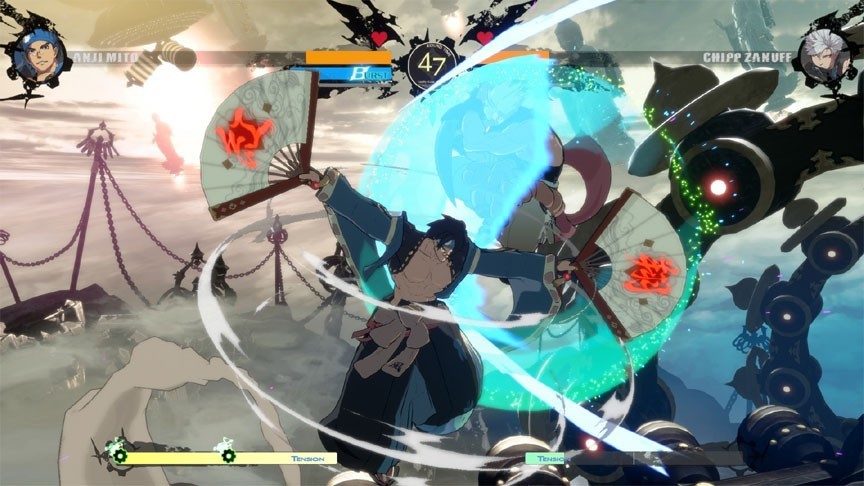 The visuals are crisp and detailed, and the game runs in a stunning 60fps on even dated graphics cards like a GTX 1070 (because Bitcoin has ruined everything and I still can’t find a 30-series GPU). The soundtrack is full of rock, metal, and pop themes, complete with vocals, that can get your blood pumping during a close match. The soundtrack itself might not be for everyone, but I found the tracks to be a great mix of sounds to which I could perform blockstrings.

All in all, Guilty Gear -Strive- offers fewer characters than previous entries, a lower execution threshold, and is more player-friendly with an active online community and netcode that should make Nintendo blush and feel ashamed for what they have in Smash Bros Ultimate. The newcomers are interesting, and I cannot possibly think of a better “hardcore” fighting game to get into than Guilty Gear -Strive-. This may not be the perfect fighting game, but for someone like myself who took a long break from traditional fighting games after Guilty Gear XX Accent Core+, it’s a fantastic option to jump back into the series after such a long hiatus.

So that’ll conclude this week’s save state- only one game this week, as I’ve also been playing Tales of Arise and preparing my review for it since it released last Friday, but hopefully hearing me ramble on about a fighting game for a while will help interest you in Guilty Gear whenever you may find one of its entries on sale. That said, we’ll press ctrl+S and close this out, see you in October!