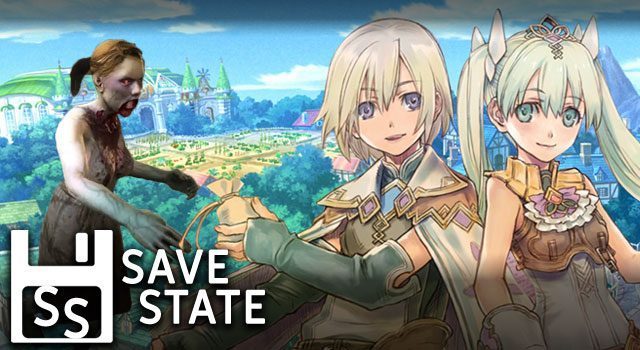 It’s Always a Good Idea to Save Twice, Just in Case…

Hello there everybody! My name’s Vincent Mahoney and this is the inaugural column for Save State. I usually do game reviews here at Gameindustry.com, but when I’m not writing here or creating graphics and artwork, I’m usually playing an RPG or some kind of online game with friends I made along the way.

If you can’t tell, I love gaming. It’s a great pastime and I find it exhilarating to explore new worlds and game mechanics then push them as far as they can go. 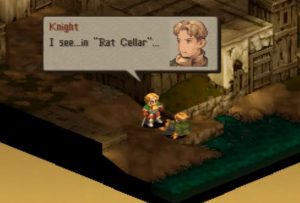 One of my fondest childhood memories was playing Final Fantasy Tactics in middle school. The story absolutely blew my mind and because none of my friends could appreciate strategy RPGs, they would never discover just how great the story was for this game because they would never deign to play it (for anyone who disagrees that FFT had a good story: I was 10 years old when it came out, and over several years I fully completed it something to the tune of eight times, with many more partial play throughs on top of that. Don’t argue against 22 year old tastes, thanks).

Long story short, I adapted as much of FFT’s story, that I could understand anyway, into a comic book and forced my best friends to read it. The artwork was awful, and sometimes I missed the point of specific character’s arcs entirely, but it gave me a positive outlet for my creativity whether I was in school or in a hospital. Being a sickly child, I latched onto gaming, drawing, and reading as things to pass the time regardless of if I was at home, on a trip, or during month-long hospitalizations (which instilled a lifelong love of handheld gaming, as an aside).

Getting older, it’s a lot easier to find interesting-looking games without having the actual time to invest in… less than stellar games. First impressions can go a long way, so this column will be chronicling whatever games I find in the moment, and convey why they may be worth a play, with no regard to how new or old it is. Kind of a snapshot celebrating different games and what makes them interesting or unique. A Save State, if you will (roll credits).

So for this very first column, the two games we’ll talk about will be Rune Factory 4 Special for the Switch and 7 Days to Die (which is on PC, Xbox One, and PS4, but by no means buy this on a platform other than PC). 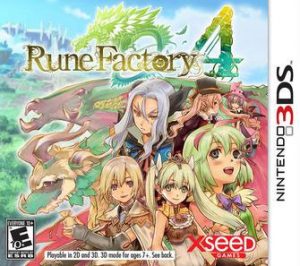 Rune Factory 4 Special is a very recent game- it originally released on 3DS in 2013 for North America, but the definitive Switch version dropped less than two weeks ago as time of this writing. It’s an upscaled 3DS game, so it doesn’t exactly look pretty, but there’s loads of things to enjoy if you’re willing to overlook the smudgy visuals. If you’ve never played a Rune Factory game before, it’s a marriage of RPG systems and Harvest Moon in the best possible way. RF4S is even more granular in its approach- every single action you take, from farming, to throwing, cooking, even eating, fills it own experience bar that increases your overall stats.

You can get romance one from a group of five bachelorettes and five bachelors and get married, build up your farm, craft almost anything, tame wild monsters, build up relationships with villagers… and that’s really only scratching the surface. Adventuring through dungeons, defeating monsters and bosses, can be a very daunting task. Luckily, you can take tamed monsters and villagers you’ve built up favor with into fields and dungeons with you, each of which have their own unique skills and benefits they can offer you in combat. 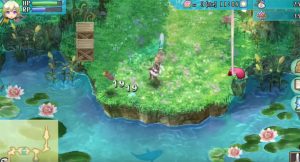 The combat is kind of simple but after unlocking more abilities by leveling up your skills, you will learn dash and charge attacks, special attacks, magic, and a lot more that make the combat flow more intuitively. The combat is simple, but fun enough to hold interest because there are so many skills you can level and use during combat. Most encounters are quick and enjoyable, and there are a ton of weapons and runes you can equip, and all of them level differently. Tamed monsters and villagers can follow you into combat too. It’s insane how many individual skills there are in Rune Factory 4, and all of it makes a delightful and addictive loop where you’re chasing certain skill levels or craftables, which levels other skills too, so it just keeps going until you feel absolutely unstoppable.

This is one I’ll be sticking with for a while, as it’s very different from games I’ve played lately and there really is a lot to keep a player hooked in the first half, at least. If you enjoy RPGs, farming, or grinding, there’s definitely something to keep you entertained in Rune Factory 4 Special. The number of times I’ve been hit by, “Just one more day” syndrome when I needed to get up for work early the next day is too much. 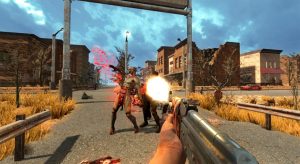 Of course, a person can’t just play RPGs all the time (no matter how much I may want to), and sometimes you just gotta shoot some zombies in the head. 7 Days to Die is a game that is still in alpha- in fact, it’s been in alpha for so long that Alpha 5 from the first seasons of Power Rangers is going, “Ai-yi-yi-yi!” The PC edition of the game still gets regular updates, many of them drastically improving the game from prior versions, but the console versions have been dead in the water since July 2017. To explain what the game is: 7 Days is a zombie survival game with crafting. You scavenge for weapons, food, and supplies to make your own base against a zombie horde that will hunt you down and try to murder you every 7 days (hence the name). Various types of zombies litter the map, some wear hardhats which protects them against headshots, some are on fire which means you are also on fire if they hit you, some call other zombies, and some explode. 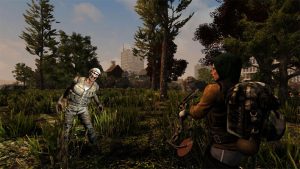 7 Days to Die certainly looks better now than it did in 2013, but it still doesn’t exactly look great. Textures are often ugly, even on the highest settings, and optimization issues abound as lowering resource-intensive settings can actually make performance worse somehow. Despite its performance and visual flaws, however, it’s a very submersive game that can easily draw you in with how addicting gathering new loot and upgrading your character can be. You can level up and get skill points (Lucky Looter tree is my absolute favorite skill to level first) which can specialize your character toward doing different things- this means that if you have friends, one can be the guy who is good at gathering stone, wood, minerals, etc., who can use and craft shotguns better than most. Another can be the dude who handles setting up forges and other crafting components to keep everybody safe on horde night, while the other guy can be Dan, the guy who put all of his points into cooking and explosives, and sets explosive mines next to people’s storage crates for laughs. Nobody likes Dan. 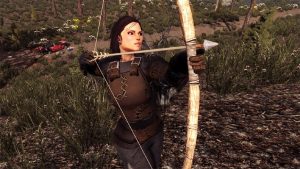 Outside of Dan, there’s a lot of fun to be had and the game is absolutely addicting due in no small part to how everything feeds back into itself in a kind of positive feedback loop: Killing zombies, crafting, upgrading all give you EXP that nets you skill points, which then let you kill zombies better, set traps, find better loot, etc., faster. If you find the game too difficult or easy, you can also completely control the difficulty in how hard zombies are to kill, frequency of zombie spawns, how much loot spawns, and you can even somewhat control what type of map the game generates too (outside tools exist to give you more exact control over this, too). PVE and PVP servers also exist, though my preferred way to play was PVE against the zombies, working with other players to survive the 7th day horde. 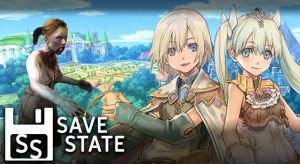 If any of this sounds remotely interesting, by all means, check it out: It’s a great game. However, avoid the console versions like the plague because those versions were licensed through Telltale Games and have been in an update-less limbo for the last three years. If you try out any version, it would need to be the PC one. The PC version is still insanely buggy, and a lot of that comes from the fact that the game is still in alpha. Performance is still give and take even after seven years of development, but the game has finally reached a point where I can safely say it’s an easy recommendation to anyone who likes zombie and crafting games.

With that, we’ll consider this first column safe to close. The next column will have a couple random games that I’ve discovered, but I’ll save that for next time!