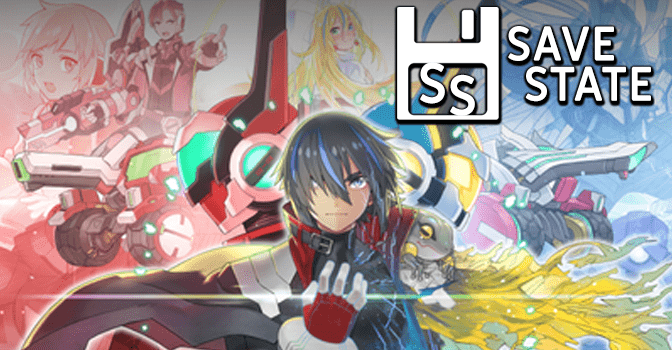 Welcome to Save State, where I play the latest in Metroidvanias so you don’t have to (but no, seriously, if you like what you read, be sure to check them out). This past couple weeks, I finally decided to take a break from Metroid titles and play a game with some backtracking and platforming gameplay… Don’t worry, I’m not going to fake you out and say I played Metroid Fusion, don’t tempt me, but I did pick up and play the third game in a series that I’ve loved for a long time: Blaster Master Zero III. I previously wrote a Save State column on Blaster Master Zero II last year and it was a game I absolutely adored, so I figured I may as well end off all of the Metroid content in this column with a game series that hits on a lot of the same notes. 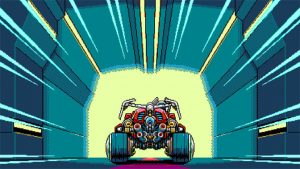 Blaster Master Zero III continues the story of the first two Blaster Master Zero games, and seems to be the conclusion of the trilogy. While it would be remiss to say that there’s a focus on story, here, it does need to be mentioned that there does seem to be a lot more dialogue in Zero III than even in Zero II. There are also a metric ton of callbacks to other games in the Blaster Master series, and establishes that the Zero series takes place after the first game in the series, and Kane Gardner from that first game even plays a role in the story. You don’t exactly lose anything by not knowing the nods to previous titles, but it would be highly recommended that people new to the series start with, at minimum, Zero II before moving on to the third game. 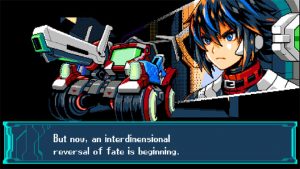 The third entry in the Blaster Master Zero series has players taking control of Jason Frudnick once again, sometime after the events of the true ending of Zero II. The protagonist finally makes his way to planet Sophia in a desperate attempt to save his support droid, Eve, but instead of being welcomed, they’re captured by the planet’s military instead. Suddenly under mutant attack, which seems odd to Jason considering the events of Zero II, he has no choice but to break out of prison, recover his tank, and chase Eve through alternate dimensions in a final attempt to save her. This is the climax of the Zero trilogy, and the end of the tale of Jason and Eve… at least for now, anyway. In any event, the story is kind of sappy, but having the gruff and abrasive Leibniz from Zero II as a supporter is definitely a change of pace from the first two Zero games. 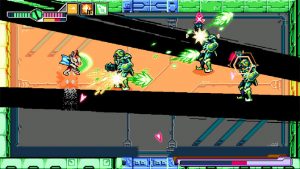 Zero III retains the mixture of 2D platforming and top-down shooting gameplay of the other Blaster Master Zero games, and expands upon the formula substantially. 2D mode will primarily have the player controlling a tank- well-armored, and capable of restoring weapon reserves by converting kinetic force to energy tanks, meaning that taking hits and jumping from high locations means you get more firepower to explode mutants that stand in your way. Players will also be able to jump out of their tank to explore dungeons that the tank can’t fit into, and in these dungeons Blaster Master Zero III takes a top-down perspective where you move the pilot in 8 directions to attack enemies and find various goodies. Most of your new weapons, abilities, key items, health and ammo upgrades and the like will be within these dungeons.

Where Zero III substantially ups the ante is in how fluid and quick movement now is in this third game- the basics of pilot on-foot combat have largely stayed the same. You have a gun level gauge that, when filled, makes your gun shots extremely powerful or have useful secondary effects like stunning enemies, but taking a hit reduces your gun level by 1. This means that getting hit multiple times can create a death spiral where you already weren’t doing well in a boss fight, now your gun is weaker or can’t stun so you get hit again, which makes your gun even weaker, and so on. 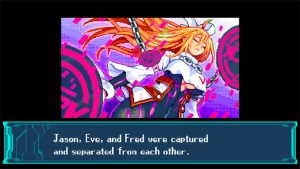 To counteract the downward combat spiral seen in previous Blaster Master games, Zero III implemented some new mechanics, such as a powerful dash that, later in the game, gets the ability to reflect enemy bullets back at them. Even when just maneuvering about the dungeons, the dash is invaluable since it lets you move so much faster to the point that it’s actually hard to readjust to previous games in the series (I thought to try a DLC character from Zero 1 but combat was so slow, I had difficulty going backwards). The powerful counterattacks from Zero II also make a return, as well, giving you several more options in how you handle attacking mutants. 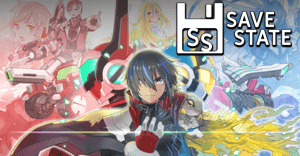 Zero III gets some extra mileage out of its maps by introducing super dimensional space- environments that are stressful on the hero’s body so he can only stay in them for a limited time, but are necessary to travel through in order to make your way past roadblocks or obstacles. Much of super dimensional space in the 2D segments is simply the same map, but mirrored, flipped upside down, etc., which does seem interesting at first, but later on makes navigation and backtracking pretty convoluted. It’s important to always utilize your map as you can see what spaces connect to where, making backtracking much easier to figure out once you have a zone’s map. 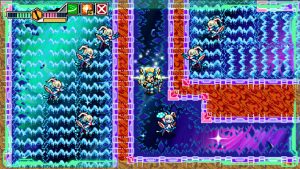 In the top-down gameplay segments, the SF Dungeons are typically loaded to the brim with tanky military robots that seem to endlessly respawn, but you can bypass them by entering super dimensional space, which often gives you a much easier way of getting to the end, but is composed of randomly-assorted rooms that are matched together, like the randomized chunks of stage from the roguelite 20XX. If you replay a dungeon and go into the alternate dimension (in case you missed something, for example), it’s very likely that you won’t see the same rooms in the same order again. This isn’t an issue for most of the general playthrough, but toward the end of the game it is likely you’ll see repeats, which is somewhat disheartening. 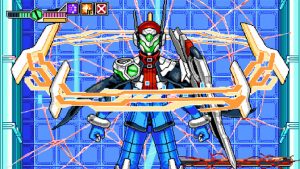 Apparently, somewhere, there must have been people who complained about losing health and shot levels due to getting hit. To compensate for this, Zero III introduces these new temporary health shield items that let you stack up to 16 extra units of health (for reference, the standard health gauge is 8, and can be expanded up to 16 by finding all of the health upgrades in the game). The temporary health can be useful for brute forcing bosses that you don’t fully understand the patterns of, yet, but this extra health mechanic did come with some unnecessary baggage. For some reason, I imagine it’s the assumption that the player will have bonus health, the game likes to spam respawning enemies that can tag you quickly if you’re not already aware of them spawning into a set location. 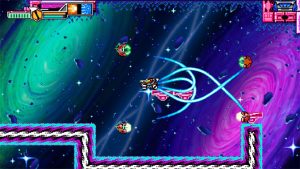 To explain the problem: There are instances where you might just be driving through a new area, having a nice Sunday afternoon driving up the walls, and then an enemy spawns directly on top of you and damages you out of nowhere. You kill that enemy, jump back onto the wall to drive up it, as you do because that’s how physics work, and then it spawns the enemy again out of the invisible enemy spawning hellhole. You kill that one, then you can finally drive up the wall without getting damaged because it didn’t respawn this time. Were you supposed to know that it was going to spawn the enemy there, twice? I don’t think so, but Zero III is oddly riddled with these types of occurrences and it’s outright strange considering how Zero II was tough, but fair, in its enemy placement. Even more interesting, due to the temporary health add-ons, these stupid gotcha enemy spawns never actually killed me a single time in the entire game, it was just annoying to the point I remember exactly where this particular instance was near the end of the game (which is impressive, because I hardly remember anything, for the record). 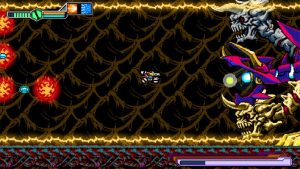 Contrasting the level design, bosses in Zero III are among some of the fairest in the series. Generally speaking, if a boss seems too hard at first, you’ve got a new subweapon, ability, or strategy that you can use to bypass it, if you can figure it out. Sometimes, even when you don’t figure out the boss’s strategy, simply dodging and shooting will be enough to make it through the encounter. There was a millipede boss a significant portion of the way through the game who I made it through both phases of without even figuring out the “intended” way to beat its second phase- I just dodged and shot the armor piercing round, and everything worked out without my even getting hit. Some bosses are substantially more difficult to do this with than others, but generally speaking, once you figure out the trick to the boss (which usually involves a subweapon or other thing you recently acquired), they are pretty easy to handle. Well, except for the bosses during the true ending route, but that’s another matter entirely. 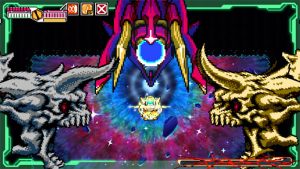 Even if elements of Zero III annoyed me, such as the unrelenting enemy spam in dungeons or gratuitous use of spawn-in sneak attacks, I still can’t help but admit that I had a great time with this game. The bosses were easily my favorite part, being both dynamic and challenging a good portion of the time, and the ending was… well, extremely impressive. The Blaster Master Zero series was originally thought to be a reboot of the Blaster Master franchise, but Zero III completely subverts this expectation- in multiple ways, in fact (Raiden, eat your heart out). With room for even more Blaster Master in the future, I can’t help but wonder how the series is going to play, and what kind of tale IntiCreates will try to weave, next.

That being said, I think we’re safe to ctrl+S this week’s Save State. I do hope you’ll join me here again in two weeks’ time, and hopefully by then I will have played something that isn’t a platformer with collectibles and backtracking. Possibly. See you next time!