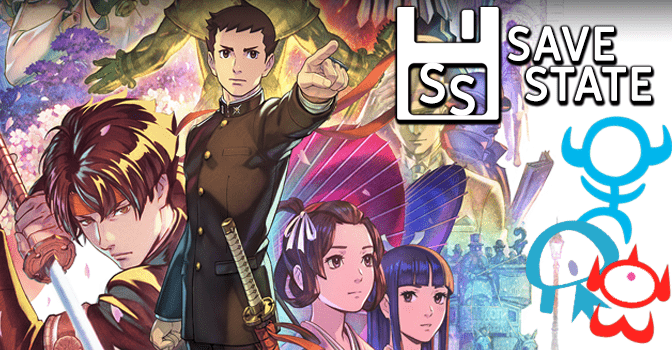 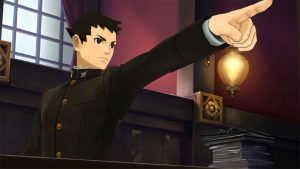 The Great Ace Attorney Chronicles follows the story of Ryunosuke Naruhodo, a distant relative of the more famous Phoenix Wright (whose surname is also Naruhodo, but for us Westerners, he was Americanized pretty thoroughly. “Eat your hamburgers, Apollo”). The Great Ace Attorney is effectively a spinoff tale about a Japanese man accused of murder, who eventually winds up going to early 20th century London to practice law. Events unfold that eventually embroil the young lawyer in a series of defense cases with a colorful cast of background characters, such as Herlock Sholmes and Iris Watson, because of course his trusty assistant is now a 10 year old anime girl (I don’t make the rules).

Ace Attorney is not a, “Who dunnit” franchise, but a “How dunnit.” You typically piece together the killer quickly, or are outright told who the baddie is, but the real interesting part is finding out how the killer flew through the air after stabbing the victim, or devise strategies to prolong a case so you don’t exonerate a murderer while the police are rushing to save your kidnapped friend. All Ace Attorney games have delightful, cartoony visuals, expressive animations of all characters that convey their personality, and largely consist of two separate gameplay elements: Investigation and Trial segments. 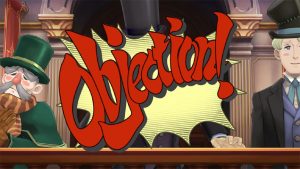 Investigations in Ace Attorney function as a mixture of visual novels and of hidden object games: You inspect various locations to acquire evidence that has something to do with the case, and speak to everyone involved. Investigations are largely to get an idea of what happened- who the victim really was, what compromising situation was your client found in, piecing together the murder mystery, and everything of the sort. Everything learned in the investigations comes to play in the trial portion, which is probably the part the games are most known for- making wild theories about what really happened while shouting, “Objection!” and pointing a finger. 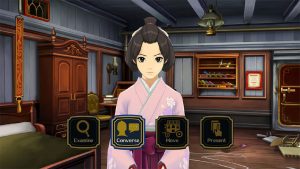 In the Trial segments, you listen to witness testimony and present evidence to punch holes in their explanation of events. When witnesses begin to crack, or show that they’re lying, their animations change, and newly provided evidence can knock the lawyers back as if they took a strong blow to the abdomen. It’s over the top and absolutely delightful, and solving a convoluted mystery after the fact has always been a strong point of the series. There are new mechanics to trials in The Great Ace Attorney games, as well, as a jury exists in London courts and there will be times you’ll need to change their minds and prevent them from voting your client guilty, usually by exposing holes in their logic or literally pitting the jury against each other. Similarly, multiple witnesses take the stand at once to testify, and sometimes you can pull additional information out of a witness that reacts to a statement given by the testifying witness.

There’s a lot in the Ace Attorney series that tries to make the player feel clever. A substantial portion of the time, the player is required to subvert expectations of the facts of the case in order to get closer to the truth. It’s difficult to give examples without spoiling anything, but here we go: Imagine a situation where a defendant is being tried for stealing a golden burrito, and all the evidence, when given a cursory glance, points toward the defendant. Little by little, as you present and hypothesize, you discover that everything falls into place if the old man on the witness stand stole the burrito, so you request a body search of the old man, which he gladly subjects himself to. Except- wait just a moment, you realize that there was a time that the old man was arguing with another witness in the stand, and this was very out of character for him, so you instead request the search… of the other witness. Lo and behold, the golden burrito is found, God bless its gilded tortilla, and you feel brilliant. 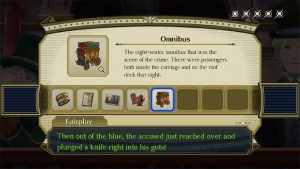 Obviously there is no golden burrito in The Great Ace Attorney as it’s set in early 1900s England and Japan, but there’s just a convincing flair in these games that is only aided by the fact that The Great Ace Attorney makes better use of 3D visuals than any previous Ace Attorney game. There are moments where the camera will pan around the characters to make the high-octane finger-pointing moments significantly more impactful. The cinematic flourishes and animations really make it feel like Ace Attorney has finally joined us in the current console generation, whether they do it for dramatic effect, goofs and gaffes, or even to show the player vital clues that will be relevant later. Sometimes, even what seems like a visual gag can be another layer of Chekhov’s Gun. 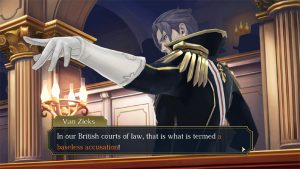 Previous Ace Attorney games on the 3DS used 3D models for visuals, but The Great Ace Attorney makes better use of animations and 3D space than Dual Destinies and Spirit of Justice. For example, during investigations there may be a moment where Herlock Sholmes (original character: do not steal) performs impressive and cinematic deductive reasoning segments. Though you often have to correct his train of logic because he misses things, the visual flair of the deductive segments keep them from getting old whenever they do show up every other case or so. The cinematic flourish of Sholmes snapping his fingers, causing a spotlight to shine down on and highlight surprised characters, the camera panning all around the room as he connects the dots in an ostentatious way, and even the reactions of other characters in the room make for some great gameplay segments with substantial story relevance. Ace Attorney has never made accusing a witness of lying look better than it does in these games, as the visuals have been polished to a respectable sheen for your Switch’s screen. 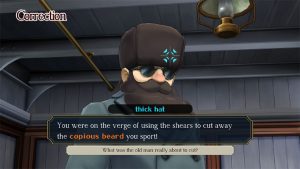 Typically, with the Ace Attorney games, the cases are only loosely connected outside of a couple that crescendo and really ramp up the stakes (the third game, Phoenix Wright Ace Attorney: Trials and Tribulations, is the perfect example of this). The Great Ace Attorney Chronicles largely has cases that are interconnected- even minor events wind up tearing into the overarching narrative in surprising ways. Effectively, The Great Ace Attorney Chronicles tells a single story across a set of two games, as the first game sets up mysteries in its first couple cases that don’t get resolved until the second game. Due to sheer length, this does mean the narrative payoff for those mysteries takes much longer, but the climax of The Great Ace Attorney: Resolve is all the stronger for it, with an incredible narrative payoff at the end.

All in all, if you’re even remotely a fan of visual novels or mysteries, The Great Ace Attorney Chronicles offers two very strong games for its price. There’s twice as much content as other Ace Attorney games since this is two games in one package, and there are multiple narrative threads that weave convincing from the first game into the second, leading to a very impressive final case that fans of the series absolutely should experience. If you’ve never played Ace Attorney before because you found jumping in at the fifth or sixth game to be confusing, then there’s never been a better entry for you to try. There are no objections; the defense rests.

The second game I played in the last couple weeks was a puzzle game from the Nintendo DS titled Meteos. A force threatens the entire universe, so various alien lifeforms band together in order to battle against it, matching three of similar elements to combine and launch them into the evil planet Meteo. During the course of a match, you’ll be bombarded by blocks called Meteos from the top of the screen, and you’ll need to quickly shift them up and down vertically, using the DS’s stylus, to combine like elements and send them back to their maker, though the frantic nature of the gameplay is somewhat difficult to describe. Meteos isn’t your usual match three puzzle game- combining three like Meteos doesn’t instant launch only those three- the blocks burn out and turn the entire column they’re supporting into a rocket, and you will need to match more and more within that column to successfully initiate takeoff and fight back. 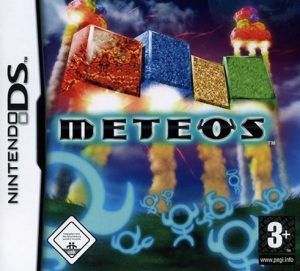 Each planet you visit in Star Trip, the primary single player mode of Meteos, has its own unique properties, such as having different numbers of columns you can play in, different levels of gravity, or different combinations of blocks that appear, as well as different skins for their blocks. There are branching paths and different planets you can encounter, as well, which makes for a super interesting experience where you can challenge yourself by trying to complete some of the more difficult planets that make launching substantially harder. The same lose condition is present no matter the planet you’re playing on, however: If the blocks stack to the ceiling, you lose. 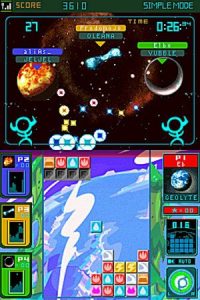 For solo content, players have access to a variety of modes such as time trials in the Time War mode, an endurance mode called Deluge, and battles against computer-controlled players called Simple. Matches in the Simple mode can be customized pretty substantially, even with stock and timed match options, and a variety of planets to choose from. There’s also a multiplayer option where you can play with a friend who has a DS and no copy of Meteos through DS Download Play, but that wasn’t something I could take advantage of in these last couple weeks. For those who want a better understanding of the gameplay, there’s even a tutorial mode. 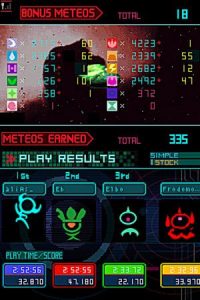 Being a puzzle game, there really isn’t much to say about Meteos other than it’s fantastic, and probably one of my favorite puzzlers of all time. I originally pulled out my DS to check its battery and ensure it wasn’t swollen, but when I saw the game in the cartridge slot, I found myself losing 30 or 40 minutes at a time to just… enjoying myself. No great narrative, just frantically pushing away Meteos as they ever-constantly rained from the sky, and enjoying myself a substantial amount. The gameplay is this frenetic back-and-forth where launching a huge stack to beat an opponent all at once carries a substantial amount of risk.

You see, new Meteos falling from the sky can even prevent your launched blocks from taking off, so you have to be constantly vigilant during protracted games to manage your play field, as the more Meteos that pile up, the more chances you have to create matches that launch the columns. However, the more Meteos that pile up, the more difficult it becomes to gather enough momentum to launch your rocket off various planetary elements off the top of the screen. Failing to launch some Meteos can leave you with burnt out blocks of garbage that can’t do anything, too, so biting off more than you can chew can cause a chain reaction of problems that results in a loss! 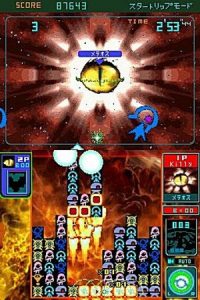 Meteos is a game I hadn’t so much as thought about in years, but was really happy I stumbled across when doing routine checks. Similarly, those of you who horde old game consoles- go through your belongings, and make sure that the batteries haven’t corroded, swollen, or burst! It’s vital to the longevity of your items, and you’ll be happy you did so if you discover, say, a special edition Gameboy Advance with a popped out battery door.

All that being said, this week’s edition of Save State can freely be closed. Be sure to hit save before pressing ctrl+W, and we’ll see you here again in a couple weeks!