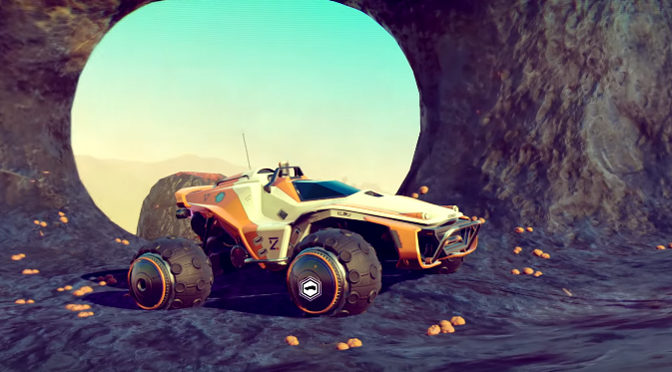 No Man’s Sky. If there was any other game that was more infamous last year, I would like to know about it. After all, what other game developed so much hype since its announcement? Whether it be hype created by a rabid fanbase who wanted more than what the game promised, or even all the hype that Sony (more so by making the game full price) and Hello Games themselves conjured up (i.e. multiplayer,) can anyone be surprised at the reception the game received? Even I rated it as my #2 pick for the worst game of the year (beaten only by Homefront: The Revolution.)

After the game came out, Sean Murray and the rest of Hello Games went into a period of complete silence; no posts from Twitter or anywhere else. A lot of people, myself included, thought that they just took the money and ran. Even I thought it as well. But much to my surprise, a few months later, they released the Foundation Update which added some new elements to the game, most notably settling on a “home planet” and base building. They also added much needed controller shortcuts to the maligned interface system, thereby making all the equipment recharging much easier. It was a start, but still wasn’t enough to win me back over.

Keep in mind though, when I originally played this, it was a shared Steam copy of the game. And yes, I know, there are fan based mods that I could have used. But I admit I’m not a huge fan of fan based mods because to me they end up breaking the game more than enhancing it. The ones I experienced with Civilization: Beyond Earth can prove that. Since then I purchased a PS4 Pro and have been trying out its new features, and seeing how games look in HDR. Before then the only experiences I had were with Deus Ex: Mankind Divided and Horizon: Zero Dawn; both of which looked amazing when HDR enhanced. So needless to say I wanted to get more games to try out the PS4 Pro’s enhanced features. And even if a game wasn’t enhanced, it would at least give me a chance to try out the Boost Mode that was added with System Software 4.5.

And then No Man’s Sky comes back into my life. Last week Hello Games announced the Pathfinder Update which includes even more additions to the game, most notably the addition of surface based vehicles, though sadly only on your home planet. I was hoping they would add them to all planets in case I ever needed to hunt down that much needed plutonium to fuel up my launch thrusters. Bases can now also be shared with other players, which is a step closer to the multiplayer features that Sean Murray originally lied about in that infamous interview. But what interested me the most was the addition of PS4 Pro enhancements such as 4K resolution, improved textures (as well as an Ultra settings mode on PC) and of course, HDR. So needless to say it got me interested, but as the game was still retailing for $60 in stores, there was no way I was going to invest that much money on it.

So in the end, I went back to a very reliable source to procure a copy: Gamefly. I knew I just needed a used copy, and found that Gamefly was offering it used for $16. I also had a refund certificate with them, so at $11, which is what I thought the final product should have sold for in the state it was in, I decided to order it.

The game finally arrived in my mailbox yesterday, so I will admit I did not have a lot of time playing it and it made me wish I could transfer my PC save over to PS4. But I could already see how well it looked on PS4 Pro. I can’t say if it’s native 4K or upscaled but it did look very impressive, and yes the HDR is stunning. Not only that, but it ran better than it did on my laptop (which I normally ran at 900p high settings.) I also noticed some of the changes from the original build, such as the nanite currency which is now used to purchase blueprints instead of constantly finding duplicates inside storage modules. I guess I can be thankful for that, as I will only purchase the ones I need.

However I’m sure that it’s going to be a while before I can get access to the surface vehicles, and hopefully the Pathfinder update will help make this game less than the grind that made me quit earlier. I’m willing to give the game a second chance, but it’s still too soon to completely forgive Sean Murray and Hello Games for their past transgressions.

Believe me, I will be following this up.

7 thoughts on “Worth Another Look? A No Man’s Sky Retry”