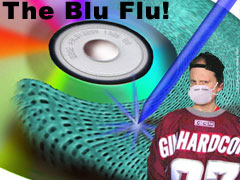 I'm sure a lot of you are looking at the title and thinking "oh great, here he goes again with his criticism of the PlayStation 3." And yes, I am going to go off on it again.
I can't help it. From what I have seen there has been nothing but disgust for Sony's newest product, and I'm not the only one to say so.

Look at all the critics with what they have said. Gamespot in particular have presented a display of games running on both the Xbox 360 and the PS3. Upon closer look it has been shown that the 360 looks better.

Then there are games that also run smoother elsewhere. I will admit that I have never played Call of Duty 3 on the PS3, but I have on the 360. I never expected COD3 to run as smooth as its predecessor. I was wrong. It actually runs BETTER than COD2. The PS3 version is embattled with frame rate issues. Yes I know I'm comparing first-generation PS3 titles to second-generation 360 titles, but still, is this why people waited in line for weeks on end, and caused some to even attempt armed robbery?

And of course, what about the crippled HDTV features, especially the 1080i ordeal? On Wednesday, Sony has released their 1.3 firmware update, which does give priority to 1080i HDTV over 720p. Does this allow games like Resistance: Fall of Man to finally be played in 1080i? According to web blog Joystiq, no! Sony needs to stop dragging their feet and get this problem solved right away! I refuse to play HD games in 480p!

What about controls which need to be connected via USB in order to sync their Bluetooth signal? What was Sony smoking when they thought of that? I mean, look at how the 360 reads the 2.4GHz RF signal without even a hitch. I don't need to connect my controller via USB unless I need to recharge my battery, and that's the way it should be.

But what gets me the most about the PS3 is the way Sony is using it to plug Blu-Ray. In my opinion, Blu-Ray is overhyped, especially when you consider how expensive a player is. Not including the $600 maximum for a PS3, a standalone Blu-Ray player goes for anywhere from $800-$1,000. You may as well just call it "Blu-Pay!" The competing format, Toshiba's HD-DVD will go for about $500 for a standalone player, or even better, be installed as an OPTION for the Xbox 360 for only $200.

Note that OPTION is the ideal word here. While Sony forces Blu-Ray on its customers with the PS3 (hence the higher cost of the system,) Microsoft is allowing the ability to add HD-DVD capability in the near future. To me, that's a smart move. In doing so, it keeps the 360 at the $400 price range it is currently at, while allowing players to decide if they want to watch movies in standard DVD or HD-DVD.

Also with the additional drive, it can be used to watch standard DVDs as well. That way I can keep the built in 360 drive separate to play games while the HD drive will be used specifically for movies. But what I like most about the HD-DVD mode is that is can feature full HD in 720p or 1080i. To truly experience Blu-Ray, you need to have a 1080p HDTV with HDMI cables. How many people have that to begin with?

Thus, Blu-Ray is turning into the next Betamax, where you have to purchase a full system (PS3, 1080p HDTV, and HDMI cables) rather than just purchasing a modular HD-DVD drive. Also, I'm sure there are a lot of Blu-Ray fanboys that are reading this commentary saying their disc capacity is higher, and yes that is true (50 GB for a BD-ROM compared to a maximum of 30 GB for an HD-DVD,) but when you think of it, you only need about 8 GB for a 2 hour HD movie. What are you going to add with that additional 42 GB?

Surely you could improve the video quality, right? Well that hasn't been the case. In all the reviews that I have read, the video quality in HD-DVD is marginally better than that of Blu-Ray, even with less storage space. From the HD-DVDs I have tested, I have been nothing short of impressed with the image quality, and the menu interaction (which actually takes place while the movie is playing) is very impressive. There are complains though about the HD-DVD drive not having an HDMI cable, but since I run in 1080i component, I have no problems with it.

And of course, is there any other portable HD-DVD drive that can also function on a Windows XP/Vista PC? This one can with the right Toshiba drivers. Let's see Sony do that with a Blu-Ray drive. Oh wait, they did, but you're forced to buy a new $3,000 laptop to do so!

Face it Sony, Blu-Ray isn't cutting it. Even with forcing it via the PS3, consumers are not buying it. In fact, according to a recent Cymfony survey, HD-DVD has a 46% more favorable impression on message boards than does Blu-Ray. If this keeps up, even Blu-Ray loyalists like 20th Century Fox will end up converting to HD-DVD, and that will kill the PS3's key selling point. But then again a key selling point of the PS2 was DVD playback, and we all know how much that sucked.