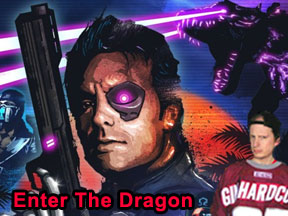 And Why Are They Awesome?

(WARNING: The following column features spoilers for the release of Far Cry 3: Blood Dragon. If you have not finished playing this slice of 80s awesomeness, then I suggest you turn away, get on XBLA or PSN and pay your $15 to play it. You have been warned!)

My love for all things 80s goes without saying. Look at all the great television shows, movies, cartoons (way before they were ruined with the dreaded E I bug,) and of course, the video games that encompassed such an amazing decade.

And now we are seeing these games come back in some way or another. We see the classic games brought back via emulation, which I will gladly play any time.

Then there are the updated sequels to classic games, but the way I see some of them, it terrifies me. We’ve had the good reboots (SpyHunter, Mortal Kombat 9, Splatterhouse (yes I actually liked it,) and Bionic Commando Rearmed) as well as the bad (TMNT Reshelled, Golden Axe: Beast Rider, Metroid; Other M., and yes, the Bionic Commando sequel where YOUR WIFE IS INSIDE YOUR BIONIC ARM!)

And then we have the awesome remakes, such as I experienced last year with the unbelievable Double Dragon Neon. What I considered to be a hilarious parody of the 1980s and 1990s Konami beat-em ups featured one of the most memorable soundtracks in recent memory. And yes, I still stand by my opinion that Dare to Dream blows away Still Alive as the best end theme ever!

But here we are, halfway through May, and the latest taste of pure 80s goodness comes to us from Ubisoft. Let me get this out of the way right now. I loved Far Cry 3. Though I don’t believe the game truly was ‘Skyrim with Guns,’ that honor goes to Fallout 3, the game was a highly enjoyable sandbox first person shooter including one of the most memorable villains in recent memory. My only regret is that 2012’s Badass of the Year winner Vaas was not in the game more. He should have been. He made that game memorable, and if it weren’t for XCOM: Enemy Unknown, Far Cry 3 would have won Game of the Year from me.

Why am I talking about Far Cry 3 right now? Because its standalone DLC spinoff Blood Dragon gives Far Cry 3 an amazing 80s coat of paint and enough parody material to make the game stand out of its own.

How much of the 80s is in this game? Well first of all, the main character, Sgt. Rex "Power" Colt, is voiced by none other than Michael Biehn of Terminator and Aliens fame. Picture his voice as a cyborg version of Duke Nukem, and you know where this is going: a character that spouts off hilarious one liners for every head shot he performs, flips off the screen when not doing a melee attack, and even tells his HUD system to **** off when it is annoying him.

And yes, the HUD does admit it’s annoying you too. During the tutorial it actually says "Press A if you find this annoying."

Heck, even before this all begins, the Predator spoofs begin, where you are on board a chopper firing a machine gun while Long Tall Sally by Little Richard plays in the background. Then we go through some of the best parodies of the 80s that can be thrown upon us: the Tron laser-esque environments, the access codes from The Running Man, burning eggs similar to Aliens (and of course, the awesome weed burning mission from Far Cry 3) and a first person Zerg Rush leading to the ultimate weapon: the Killstar: a Glaive-like star that shoots a laser beam of doom. It supposedly drains your health but it does so at such a slow pace that you don’t need to worry about it.

And that leads to the final mission of the game: an amazing homage to 80s action movies called "I Must Break You." After obtaining the Killstar, Colt goes on a one-man killing spree towards primary antagonist Sloan’s central complex. That alone might be what makes the final mission worth playing, but it’s not until you enter the final door that you experience what web reviewer Spoony might consider the manliest moment ever seen in a video game: the first appearance of the Battle Armored Dragon Assault Strike System (B.A.D.A.S.S.). I know I never mentioned the titular Blood Dragons yet, which are mutant cybernetic dragons that shoot lasers out of their eyes (and can be used as allies by throwing cyberhearts from fallen troopers.) But this one can actually be ridden on, and yes in his own words "and I shoot lasers out of my censored eyes!"

So yes, we are treated to a three minute long overload of 80s awesomeness and destruction, capped off by Vince DiCola’s final battle theme from Rocky IV. And yes, the dragon even quotes Ivan Drago with the mission title, "I must break you!" What would seem like a simple rail shooter at first turns out to be the best part of the game: a scene so epic, so metal, so full of sheer manly testosterone that it might have already won my award for the "Holy Sh*t Moment of the Year," and the year isn’t even half over!

And though I gave away a major spoiler there, I won’t give away the final ending of the game, but let’s just say it parodies another key 80s moment, and it is just as epic.

Needless to say, Far Cry 3: Blood Dragon needs to be played by anyone who loves the 80s as much as I do. I know Michael Biehn is in talks for a possible sequel, and I really hope it does become a reality. Next time though, also bring along Reb Brown and his vicious death scream to use as a weapon against Omega Force. Then again, Rex Colt’s scream when firing the Terror 4000 chaingun might rival it.