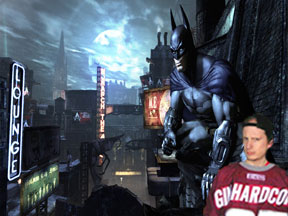 Dateline: Arkham City. While it might not have been as much of a hit to me personally as its predecessor, Arkham Asylum, it still was quite an impressive open world game. One of the key elements that I enjoyed about both games was the top notch voice acting. The talents of both Kevin Conroy and Mark Hamill as Batman and the Joker respectively, as well as Arleen Sorkin as Harley Quinn in Asylum, was enough to keep the storyline entertaining. In fact, they made the game feel like a new episode of the classic Batman Animated Series.

But since Arkham Asylum, we’ve seen this talent start to fade away. First Arleen Sorkin was replaced with Tara Strong, and I have to be one to admit her performance of Harley Quinn was far below expectations when compared to Sorkin. In fact when there was an option later in Arkham City to keep her gagged, I heard what she had to say, then immediately put the gag back in her mouth. Having Strong come back for the Harley Quinn’s Revenge DLC didn’t convince me otherwise.

Even before the Revenge DLC came out, we also found out that the voice of the Joker since Batman: the Animated Series, Mark Hamill, would make Arkham City his final role as the iconic villain. I guess killing him off in the main story line would make a lot more sense if it’s going to be his final performance. Nothing can replace Mark Hamill; we’ve seen attempts before without any success at all *cough* Freddie Prinze Jr. *cough*

Now, there is talk about Rocksteady’s next Batman project. Rumors are circulating that the game will take place during the Silver Age of comics. If this is true, it would make sense that Batman would not be voiced by Kevin Conroy. Instead, getting Adam West to portray Batman would fit best in this setting. Also, West is known for many voice actor roles, and is best known now as the voice of the mayor in Family Guy. So being a voice actor would fit well for him to return as a possible Silver Age Batman.

However, there is one recent departure from the Rocksteady Batman series that might hurt the most to me, and that would be writer Paul Dini. Of course he didn’t just write for the two Arkham games, but the Animated Series as well. Fans would want a writer of such a high caliber to work on the third Batman case, but according to a Game Informer post, that won’t happen.

Dini explains what happend in his own words in that same post. The last talk I had with Warner Interactive about future games was while I was doing promotion for Arkham City last September. Naturally as there was such a rush of interest about Arkham City, everyone was asking me about a third game, and frankly, I had been wondering about that myself. When I asked about the possibility of working on a third game, I was told that as Rocksteady had just finished wrapping the second one, it would be a while before everyone was ready to sit down and discuss future plans. That said, it was intimated that for future games, Warner and Rocksteady might not be looking as much to freelance writers, the message being, that if I had something else interesting coming my way, I might want to take it.

Not wanting a writer like Paul Dini to work on your latest Batman game? Smart move Warner and Rocksteady! I really hope this gets resolved, and he does end up coming back for the Silver Age project. That, and the possibility of getting Adam West to voice Silver Age Batman would be awesome.

That would be a match made in heaven for Arkham fans. Please Warner/Rocksteady, reconsider your comment of ‘if you have something else interesting coming your way, you might want to take it’ and have him pen the Silver Age Batman now!