So once again, here we are. The end of 2018 is upon us. For me it marked the first time my Washington Capitals won the Stanley Cup, and actually being AT Capital One Arena to see it happen will go down as one of the greatest moments of my life. But of course you’re not here to read about that, it’s all about the games after all, so we know what that means. It’s time for me to go off about the highlights (and of course, the lowlights) of this past year. And yes that means my two-part end of the year special. As always, I will be covering the special recognitions this week, with my best and worst of the year to follow. So with that out of the way, let’s get started. 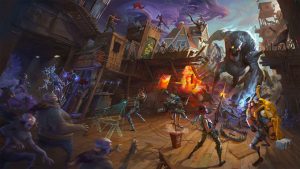 Look, I get it. Fortnite is very popular right now, and before that, Player Unknown’s Battlegrounds was also popular. But when Fortnite changed their game formula to include PUBG’s Battle Royale style rules, that’s when it got carried away. Now it seems like EVERY game has to include a Royale mode. CoD added it with Black Ops 4, single player campaign be damned, and Battlefield V is adding a Royale Mode as well. There always seems to be a “flavor of the week” when it comes to the games industry. We had the World War 2 craze, then the Zombies, and now it’s Battle Royale games. I really hope that come 2019 we get something else and Royale games will fall into obscurity.

LIE OF THE YEAR!

“Xbox has no games.” I hear it over and over again on Twitter and on Youtube, and when you have mainstream sites post this lie as well (and how they aren’t sued for libel/slander as a result I’ll never know.) If you look at my personal library, I’d like to know how 540 owned games can be claimed as “having no games.” Yes, the first party lineup is sparse, I will not deny that, but you can’t make jokes about that while at the same time claim it’s “genius” when Andrew House once said the PS4’s first party lineup was “a little sparse.” I wanted to give those who make these lies my “Dumbass of the Year” award but you’ll see eventually someone much worse earned that dishonor. But still, these lies need to be stopped!

And I’m guessing that Microsoft acquiring seven new studios (including Ninja Theory, InXile and Obsidian) means they will still have “no games?”

You all know how much I love fighting games, and how much I look forward to Evo every summer. Marvel Vs. Capcom, and more specifically Ultimate Marvel 3, was an Evo tradition, and was always one of the top three finals that I had to watch (as well as Tekken and of course, Street Fighter.) But with the poor showing of Marvel Vs. Capcom Infinite, this made the first Evo that I recall that did NOT feature a Marvel game in its tournament lineup. However, another license based fighting game took its place: the spectacular DragonBall FighterZ, and from the event’s response, it looks like it will be a regular for a few more Evos. As for Marvel, will we ever see it return? 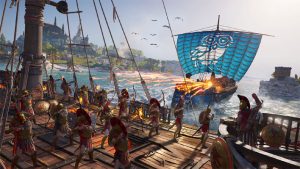 Again, people take even the slightest hint of microtransactions way too far. And before you all say how I support ALL of them, you’ll see in my Worst Games of 2018 list that is to the contrary. But when someone uses any announcement of them to spread false hate on a game, especially when you can finish the game without spending ONE DIME, then it needs to be called out. Assassin’s Creed Odyssey falls into that trap when certain websites and YouTube personalities made false claims of “a huge grinding problem” and how you are forced to pay microtransactions to finish the game. But hey, anything to get those clicks and ad revenue, right? Who cares about journalistic integrity when money is involved!

The truth is, I played through Odyssey, I reached my character’s max level. It did not feel like a grind at all. And most of all I spend NOTHING on microtransactions to do so. Even more, from what I read both on Facebook and Twitter, I was not the only one. Odyssey was criminally mistreated for something they never did, and I will make sure more people know the truth that you do NOT need microtransactions to complete such a great game.

EPIC FAIL OF THE YEAR!

Retro plug and play consoles are big. But it wasn’t until Nintendo released both the NES and SNES Classic Editions that they really took off. We had the Neo Geo Mini recently come out, the C64 Mini, and for a short time the ZX Vega+ in the UK, which could also be an Epic Fail console in itself. But I’m covering the Epic Fail here in the US, and that would go to the PlayStation Classic. Sure the idea of a mini PlayStation 1 with 20 built in games would have worked here, if Sony took as much care as Nintendo did with their consoles. But instead, we get PAL copies of nine of their games, a barebones user interface, and a lineup that makes absolutely no sense at all. Add in the fact that Sony decided to use an open source emulator instead of their own proprietary format (which makes no sense considering Sony’s love of proprietary hardware) and you have a recipe for disaster. As of this past Tuesday I still see tons of PS Classics languishing on store shelves, with even Amazon selling them at a discounted rate, even bundling them with Amazon Gift Cards as a way to say “please take these off of our hands.”

On the bright side, the hacking community is hard at work and are doing their best to add more games to the PS Classic, so there might be some hope left. But for now, it’s a massive flop.

DUMBASS OF THE YEAR!

Speaking of failed consoles, we have a new challenger jumping in to win this dubious honor. My original plan was to induct Billy Mitchell and his campaign of defiance after his bust for cheating. But after some careful consideration and discussions with several other insiders, I decided that we have to give this dishonor to Soulja Boy. Earlier this week he announced he was releasing both a Soulja Game Handheld and the Soulja Game Console, a mock Xbox One S that includes thousands of games, mostly from past consoles (NES/FC, Sega Genesis/Mega Drive, and Capcom CPS.) We already know these consoles are just AliExpress knockoff consoles that you can get for dirt cheap without the Soulja Boy name, but it seems every day he is coming out with ANOTHER console. He’s already added the more expensive Soulja Fuze, and a Soulja Boy Mini Handheld (a blatant ripoff of the Game Boy color.) Needless to say the legal ramifications of this endeavor are massive, and we already know how Nintendo is when it comes to copyright infringement. Maybe he should take my award and sell it to cover his legal fees, but then again, my awards are worthless, so good luck getting out of legal hell!

BADASS OF THE YEAR! 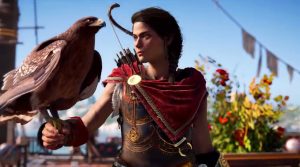 Leave it to a disgraced Spartan to get this award, but yes, I absolutely loved Kassandra in Assassin’s Creed Odyssey. In the many hours I spent playing the game she went from being thrown off a cliff when trying to defend her brother Alexios to finding him and restoring him from the Cult of Kosmos (and yes, I do consider this version as canon) she just proved how brutally awesome her character is, even when making small quips about her settings and her reactions to being set on fire. I loved every minute of it. And I even made her even better when I dressed her up in Persian Immortal armor to make her even more of a beast. Very few characters impressed me as much as she did and I will definitely be spending more time with her until the next AC title comes out.

With that, we come to the end of Part 1 of my 2018 Hardcore Awards. Come back in two weeks and I will give out my picks for best and worst of the year, and of course, find out which game SHOULD be criticized for forced microtransactions. I promise you that you will be surprised with the results.