Wow. I didn’t expect to write another one of these columns, but here with are with Part 3 of Todd vs. the Resellers. Again, we are hitting the holiday season and again there is a hot item that everyone wants but no one can find it. And as a result, it becomes the hot target for scalpers and resellers to hoard as many copies as they can, then flip them on eBay for massive profits.

Well, my fellow anti-reseller crusaders, allow me to show you our latest victim of the reseller craze: 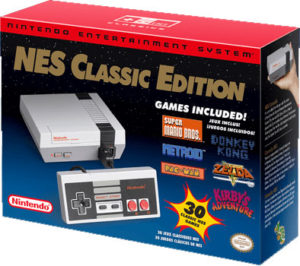 This is the Nintendo Entertainment System Classic Edition, a plug and play console. Usually plug and play consoles are a dime a dozen. I’ve dealt with many of these consoles before. I’ve owned several Atari Flashbacks, as well as a Colecovision and Intellivision Flashback, all of which vary in terms of quality. In fact, I’m also considering an Atari Flashback Portable console due to its SD card capability.

But this one is officially licensed by Nintendo, designed to look like a small NES console, right down to the iconic controllers, and comes bundled with 30 quality NES games. Its initial price of $60 might be a little on the high side, but I guess because of it being a quality product by Nintendo (in comparison the above listed Flashback consoles usually retail for $40) it would be a good value.

Now I do have to post a little disclaimer here. I would not have purchased one of these consoles for myself. However, my girlfriend was interested in getting one, and I was hoping to buy one for her for Christmas.

Come launch day, reports of the NES Classic Mini’s scarcity started to appear, with some stores getting as few as six units. Even some people who waited in line for hours walked away with absolutely nothing. It also didn’t help that stores like Gamestop would not even take pre-orders for it. Yes, I know, I’ve been very critical of pre-orders, but at least this way people would know they would get a console (well, most of the time.)

When I heard about all the shortages, that’s when my reseller alert started to go off, and I immediately did a search on eBay. Much to my severe lack of surprise, there were hundreds, if not thousands of eBay listings, all of which were selling for triple digit figures! There were even listings, which I seriously hope are troll listings, going for as high as EIGHTY THOUSAND DOLLARS! Look, it is stupid for those to spend these high eBay prices to get a console, but if you want to give up eighty grand, your stupidity is at an all-time high.

But it gets worse. Even retailers are teaming up with these greedy resellers. We all know how Amazon allows resellers to post listings on their site, but even Wal-Mart is getting involved. Case in point, we have this listing here for $250.

Yes, 250! Wal-Mart wants $250 for one of these consoles!  Admittedly this listing used to be $500, but even going for half price, this is still an insult. I’ve already had a strong hatred for Wal-Mart for starting the whole Black Thursday craze, but this makes them look even worse.

But even with all the greed shown from Wal-Mart, eBay, and all the hoarders and resellers, one still has to wonder who is the most responsible for this, and we all can agree…it’s Nintendo.

We’ve seen Nintendo do this many times before; I even wrote about it in my Amiibo collection rants last year. But it’s not just the NES Mini and the Amiibos that pretend to have limited stock just to create fake hype: the Wii Fit Balance Board, the Super Smash Bros. Gamecube controller adapter for the Wii U, the original Wii Console, the Nintendo 64, the Majora’s Mask New 3DS with the Skull Kid figure, and even carts of Super Mario Bros. 2 and Zelda II: The Adventure of Link. All of these were in limited supply by Nintendo, doing anything they could to make them the must have items during the holiday.

Though we’ve seen limited stock from other companies (such as with the Xbox 360 and the original run of the PlayStation 4) at least they were able to get stock in much sooner than Nintendo ever did, and it does make me wonder more than ever, and increase my belief, that Nintendo is intentionally hoarding these items. Notice how Amiibos, even the very rare ones such as Villager, Marth, and Wii Fit Trainer, are now very easy to find?

You watch, after the holidays are over the NES Classic Mini will suffer the same fate as the Amiibos. In the meantime, my only recommendation is to do what Pat the NES Punk recommended in his Flintstones: Surprise at Dinosaur Peak review:

In fact, I think I’m going to do that right now, load up FCEUX and play some Castlevania III, a game that is NOT included in the NES Classic Mini…

Waiting For: Dead Rising 4 (Xbox One)