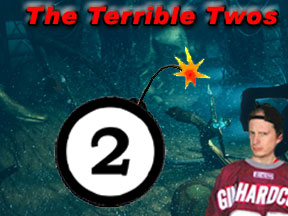 SPOILER ALERT: Ok, once again this is going to be one of those columns where I go off on a tear about a recently released game, and in doing so I'm going to give away some potential spoilers that you might not want to read. Consider this your only warning. If you don't want to know about what happens with Bioshock 2, at least one of the endings, (and I will also talk about some other games like Mass Effect 2) hit the back button or close your browser now!

I'll give you five seconds".

All right, I gave you fair warning.

I'm just going to get right to the point. The ending I got for Bioshock 2 was terrible! I know I went off before about the first game's ending, where my character has all the Little Sisters coming to see him as he is dying, most likely a result of all the plasmids and hypos he injected himself with, the addict! But at least with that game the final battle was convincing, having Jack drain all the ADAM from the final boss Fontaine. Okay, that worked out pretty well, and provided a challenge.

But what about Bioshock 2, you ask? Why did they make the final battle a survival mode? All it involved was surviving an onslaught of splicers and Alpha Series Big Daddies until Big Sister Eleanor is able to open the docking platform. We run down a corridor, and end up stopping at a dead end loaded with tons of bombs!

And then we go to a cutscene, and the one I get shows a drowning Dr. Lamb having all of her ADAM extracted by Eleanor, who then sends me up to the surface, and she extracts MY ADAM, killing me in the process. Wow, what a great way to end my story. By having my character die..AGAIN! And I don't even get the honor of killing Lamb myself? What a joke!

And yes I know there are a total of six endings available, but still, this frustrates me and again makes me have to ask just why is it the second game of a series always has to have a terrible ending?

Remember Halo 2? How many of you were furious when Master Chief said that he was going to "finish the fight?" We hear the dramatic music, and then the screen stays black, making you feel like your Xbox bought the farm, and then we are treated to"the CREDITS????

How about Gears of War 2? We have an overly simple battle against a Lambent Brumak, see the entire Jacinto stronghold collapse, hear some junk about unintended legacies, and that's it.

Maybe I should add Modern Warfare 2 to the mix, mostly because I wanted to kill off Makarov after the "No Russian" massacre, but having him as an ally due to some "enemy of my enemy" mentality was a disappointment for me. At least killing off the traitorous General Shepherd could be considered some form of redemption, but again I hate being left behind on a cliffhanger, wanting to know exactly where Nikolai is going to take me.

I can say the same about Mass Effect 2, but at least the final battle against the giant Reaper was engrossing, and the story had a decent amount of closure, while waiting to see what the impending Reaper assault will bring in Mass Effect 3.

But still, that's one of the exceptions to the second game rule. I know that developers want to keep the storyline going and make you wanting to ask why it ended the way it did, but I still have to ask why must the second game always end in such a bad way? I really wish developers would at least give us a real ending and final battle to hold us over until the next title comes out in a few years.

Maybe it was better that I sent Army of Two: the 40th Day back to Gamefly before finishing it, because after what I heard of the ending (courtesy of www.angryjoeshow.com,) I would have easily went off on it as well.