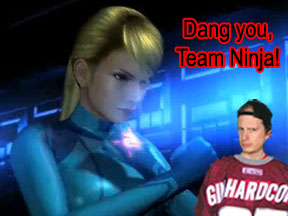 How could you take my favorite Nintendo series and destroy its main character the way you did? As if GRIN destroying the Bionic Commando franchise wasn’t bad enough, now I have to suffer through this?

That’s right. I played Metroid: Other M, and now after waiting over a year since its announcement, I wish I never did.

After the excellent job that Retro Studios did with the Prime trilogy, especially its freshman outing, I thought nothing could go wrong with the Metroid franchise. Even with the announcement of Team Ninja as a co-developer, I had hopes.

After all, this was shortly after Itagaki left Team Ninja.

Keep in mind, this is the same Team Ninja who favored more jiggle factor in their Dead or Alive series, even going as far as making those Xtreme titles that did nothing more than dressing the girls in as skimpy a swimsuit as the censors would allow.

But they wouldn’t do anything to our favorite Chozo-born bounty hunter, would they?

Right from the beginning of Other M, we are treated to a long, and I mean LOOOOOOONG, narrative. This was a bad sign at first because aside from some status displays, logbook entries and research, there was very little dialogue in the Metroid series. And now Samus is brooding about how she couldn’t save the baby Metroid in Super Metroid (which Other M takes place after.)

Don’t believe me? Let’s put it this way. The most recent Metroid titles had a way of removing all of Samus’ abilities early on. Metroid Prime’s came in the form of an electrical malfunction caused by an impact during an escape sequence. Makes sense, and it was done efficiently to lead up to the exploration of Tallon. I was fine with that.

But how does Other M handle it? She already has her weapons from the very beginning of the game. However, she cannot use them until she gets permission from Adam. Yes, I said that right, she has to get PERMISSION to use her weapons. She’s being a submissive, almost as if it’s a Team Ninja tradition.

That wasn’t the only thing that infuriated me about Other M. It was the way the first person controls were done. To switch camera modes, you have to point the Wiimote at the screen. It makes sense, until you actually try to switch back and forth in the heat of battle and aim at the right location. Even worse, just like in Resident Evil 5, you’re stuck in place when in first person. (I can see the hate mail starting to come my way.) I ended up losing a lot of energy as a result. (Thankfully energy and missiles can be replenished simply by pointing the Wiimote upward when out of danger)

Then there were times when Samus is FORCED into first person mode in order to find a very tiny detail, and if you want to return to third person, a message appears to point the Wiimote at the screen. It’s annoying, as is being stuck in small areas until you find the right event to trigger the next room. Sure it’s much easier than not knowing where to go if you’re out in the open, but I don’t want to be stuck in the same room for hours on end, and I don’t want to resort to GameFaqs all the time!

But getting back to the dialogue. It seems there are extensively long cutscenes taking place all the time, and Samus just won’t shut up. She’s more loquacious than all of the characters in Dragon Age Origins for crying out loud! I just wanted to get to the next part of the game. Sure I like a little story in my game, and yes I know there will be those who go off on me for liking the Metal Gear Solid series, but the two games are apples and oranges. MGS was always known for its story and dialogue, Metroid wasn’t.

I didn’t finish the game out of sheer frustration, but I was told by several people on Facebook that I should keep going, especially considering the game can be beat in seven hours. That short a time frame was the final straw. Prime took me about 20 hours to finish, and it was well worth the time and play. Other M, however, isn’t. I did not care for the game at all!

I really hope that if Nintendo is to make up for this and resurrect the Metroid franchise, that they put it back in the hands of Retro Studios. After all, they were the ones who were supposed to take the brunt of criticism by making it a first person shooter, but in the end, making one of the greatest games ever made for the GameCube, if not of all time.

This one really is a hard pill to swallow. Thanks, Team Ninja!

Waiting For: Halo Reach (360, and it BETTER make up for the disappointment that was ODST!)