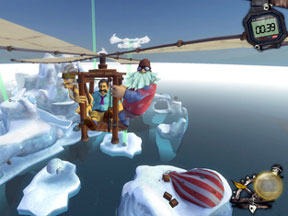 It’s so nice to be able with a modern console to just browse a list of games, download one you might like and then start playing almost immediately. PC gamers have had this ability through services like Steam and GamersGate for a while, but now PS3 and 360 players can get involved as well. And the coolest thing is that a lot of these games are inexpensive. The one we are looking at today on the PS3 network was only $9.99 at the time of this review, and rumors are that the price might drop soon.

Landit Bandit is a flight simulator of sorts, though perhaps the wackiest one you’ve ever played.

The game opens with screens of text for you to read, which sets the story. The gist is that an art thief named Lander has just washed ashore on a tiny tropical island whose sole occupant is Marley, a scraggily bearded mechanical genius. In Landers possession at the time he washes up are plans for a flying machine penned by none other then Leonardo DaVinci. Marley takes these plans and builds a working pedal-powered helicopter which he will use to fly Lander and his treasure to Mr. Art Steeler in the Big City.

Following much more text, you get to fly this craft. Learning the ropes takes no time at all. But mastering flight is another thing all together. You first learn to take off and land, followed by hovering. They you fly to a bigger island where you learn to pick up and drop off passengers. The rest of the basic game follows this theme as you work your way through 20 levels on six different worlds (and you thought you would be stuck on the islands the whole time). There is even a very fun ice world.

The controls take a bit of getting used to at first. You have to hold the trigger to peddle, but if you push too hard or release too fast, you’ll get too high or crash into the ground. Then there is titling and moving in the right direction, changing the camera angle to figure out where you need to go etc…quite challenging.

Along the way you pickup you will pickup a wingman (I guess we should say wing person) who will travel with you by standing outside the craft and hanging on. But you can only have two with you at one time. They include the island babe who makes any potential passengers you want to pickup leap into your craft, saving you the need to land (loin cloth clothed passengers only). The Mountaineer (ninjarope) and the Balloonist (ballast bags) let you do crazy stunts, maneuvers and sudden landings. Last but not least is the dragon, who uses his fire breathing to give you a turbo boost.

As you progress through the game, each level adds something new to master. Initially these can be as simple as adding a time limit. Or the dreaded jumping sharks who always were a challenge to me throughout the game.

There is not much of a story beyond what I already mentioned. The flying is the biggest aspect of the game. The graphics are good but nothing special, and the audio track was disappointing, but as good as I would expect from a download game. There where flying sounds, crashing sounds, and mumbling sounds when the characters talk.

An added bonus to Landit Bandit is Multiplayer. There are six fun options that you play split screen. There is the Secretary duel (capture the zone) which is a big battle where you ram each other and throw coconuts. There is the Rocky Race where you race through the tight corners of the mountain level. There is the Taxi Duel where you fight for customers. The ski jump is set in the ice levels and the longest jump amongst five tries wins.

The last two multiplayer levels are kind of weird. The first is called plant the cannibal and is described as a 2D duel that pays homage to the classics such as Liero and Soldat and combines it with helicopter counterstrike. The offensive player’s goal is to pick up a cannibal and get him to the defensive player’s island babe so he can do what cannibals do. The defensive player of course tries to stop this. The last mode is called Chef Duel and is about getting ingredients to make soup, and to add ingredients to your opponents dish to ruin his meal.

I personally think the developers of Landit Bandit had a lot of fun, and didn’t take anything too seriously (other than the programming) and that adds to the fun of the game. Once you have mastered flight than Landit Bandit it is a total joy. But that also leaves a lot of frustration getting there. Still, for just $9 and a quick download, it adds a great game to your PS3.