(Commentator’s Note: The following column might contain some words that you might find offensive. However, as I am a firm believer in free speech and am calling out an injustice in our industry, I am going to leave everything uncensored. If you are easily offended, you can just move on to another column. But for the rest of you, please continue onward.)

“I bet that Todd would never say anything negative about Microsoft!”

Oh how we so easily forget about my criticisms about the Xbox One reveal and all of the issues it had at the time, and how I was in favor of Sony and the PS4 at E3 2013. And I know I’ve been speaking more positively about them lately, but there were reasons of why I spoke that way: backwards compatibility, EA Access, the much improved Xbox One S, Play Anywhere. Basically more options that are beneficial to gamers.

I WILL call out BS when I see it. Those who think I say Microsoft can do no wrong are going to be in for a shock when they find out that I am going to call them out for something.

First off, a little history lesson if I may. Let me introduce you to a friend of mine and fellow Xbox Live gamer, Ashleigh Ryan. I first “met” her when I was still doing Gamer Geeks along with Kelly. After Kelly’s interview with Activision, a mutual friend of ours, Marcia Morgan, talked about the interview on her podcast, and Ashleigh was on it. Her response was “did they give her some free **** at least?” To which my reply was “actually yes, they did give her some free ****,” explained the whole situation, and became friends on Xbox Live, a gaming website called Sarcastic Gamer, and eventually Facebook. 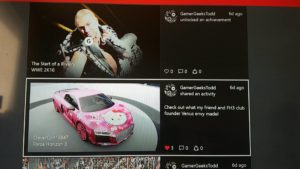 Ashleigh goes by, or should I say, went, under the Xbox Live Gamertag, Venus Envy. The reason I said “went” will be explained shortly, but let me continue on my backstory. Recently Ashleigh invited me to join her Forza Horizon 3 club, which I gladly accepted. During that time, she posted a picture of one of her car paint designs. The image went viral on Xbox Live, and was featured on the Community page. I even went as far as promoting it on my Activity Feed.

Yes, I know what you’re going to ask. Who the heck is CleverColt16847? Even I asked that last night after playing finishing work on my WWE 2K17 Universe Mode. However I received a reply from Ashleigh with this picture showing what happened.

Yes, Venus Envy had become CleverColt16847 against her own volition. In fact, she wrote a letter to the Xbox Enforcement Team, and has personally given me permission to post it here for you all to see now.

A word that means a lot in the gaming world. For many of us, it means an identity. The one name you give yourself in life. Whether you’re on Xbox Live, the PlayStation Network, etc. It is who we are as gamers. It can consist of your name, favorite character, hero, hobby or what have you. In my particular case, my Gamertag; Venus Envy has been stolen from me.

During the week of (October 3rd 2016) unbeknownst to me, I became featured on the Xbox Community section on the Xbox One Dashboard. It was a screenshot of a car I had painted for Forza Horizons 3 (a driving game). While I didn’t think it was anything special, others did, though not all. I thought it was entertaining to read all the commentary. I genuinely enjoyed the creative mean ones. I felt like I got to read my own “Mean Tweets” like on Jimmy Kimmel.

On the afternoon of October 6th, I was informed by friends via messenger, that Venus Envy was no longer existing. I logged on to check for myself and sure enough they were unfortunately, correct.  My online persona, Venus Envy was a Gamertag that I have had for ten years now. AN ENTIRE DECADE!  Now, I’d like to introduce you to: CleverColt16847. That’s right. My name was reported on Xbox Live and it automatically gave me a default name. Seriously?? There is nothing “clever” about this moniker.

Now I’m being informed that I lost my Gamertag due to it “containing inappropriate content.” Yes, I can see how one can make the innuendo from Venus Envy as being Penis Envy, but for the record it’s not what is means.

Venus is defined as the Roman goddess of beauty and love, or the second planet from the sun.  Envy denotes a longing to possess something awarded to or achieved by another: to feel envy when a friend inherits a fortune.

So purely based upon definition; How could this be considered inappropriate content?

On the https://enforcement.xbox.com site it stated on my account this enforcement action:  “This account’s Gamertag contained inappropriate content. This content may include profanity, sexual topics, hate speech, controversial religious topics, references to notorious people or organizations, sensitive current or historical events, or any content designed to sound like, look like, reference, or allude to these topics. This account’s Gamertag was issued a forced change. A new system-generated Gamertag was automatically assigned to this account, and the Gamertag that received enforcement will remain unavailable. For more information, visit: https://enforcement.xbox.com/Home/StaySafe#topic9.”

This issue was notified to the enforcement team when this incident occurred thankfully! I heard back on October 10h. That the Enforcement team decided to uphold this forced name change saying that it could be perceived to be a reference to genitalia.

Part of what I don’t understand, is that after ten years with a Gamertag is how “all of a sudden” it becomes inappropriate. Especially, when over the years I have been featured on the Xbox website for various gaming related events and various Xbox Community videos for both Canada and the USA. Additionally, I previously have also hosted several “Xbox Playdate & Community” nights. If my name is so offensive, then why was it allowed to be featured so many times before? Why is this even an issue now? Would my name not have been approved by Content Producers or other Xbox employees in the past?

Here’s one example for you:

I was never informed that I would be featured on the dashboard, how is any of this my fault? I didn’t ask for the attention, nor would I have wanted by choice. I’m not having fun replying to these kids on Xbox Live. I’m getting old now. I know nothing of teenager lingo and acronyms.

Xbox and it’s reporting system has failed in this matter. Any gamer can perceive any Gamertag as offensive now and there is little recourse for people like me. And given the current logic, names such as: Crazy Duck or SumDumFunk should also be forced to change. At least given the reasoning I have received. Or would those ones be OK? As these examples are actual current Gamertags in current use, which in my opinion could be considered as ACTUALLY OFFENSIVE!

I feel as though I have been cheated. I do believe that featured Xbox Live members shouldn’t be able to have reports sent against them just for the fact that jealous community members can inflict harm using the Xbox Live penal system.

In a time when Xbox gaming is dropping off statistically, can you seriously as a company, afford to lose long time customers such as myself?

I ask you to re-evaluate this decision and also, perhaps Community dashboard features of other fellow gamers in the future.

In addition, Ashleigh posted this on the 12th:

UPDATE: I have filed a case against the enforcement action from my end, as the answer I received back wasn’t good enough! But I am still waiting on a reply. Needless to say, I am not impressed. IMO, this just should have been fixed. No question. /sigh

I think I’ve done well! I’ve been patient over the last week and gave the benefit of the doubt. But today, not so much. I ask you, my friends, please read my story, share it, tweet them… Anything to bring attention to this matter would be BEYOND greatly appreciated.

And that is where I am coming in. I’m tired of seeing good friends like this having their identities, even virtual ones, forever changed because someone was offended by something they don’t like. Yes, Xbox Live allows people to change their own Gamertag whenever they want to (albeit costing $10,) but can you imagine if anyone, Ashleigh included, was on PlayStation Network where you cannot change your name? Would this mean that she would have her account completely banned, going as far as losing all of her digital purchases? It’s a scary thought, and I’m sure my PSN Gamertag (XMECUTIONER) would probably be reported by a sensitive individual who would claim my name promotes violence. This needs to stop. I ask all of you to share this column, as well as Venus Envy’s letter and make sure your voices are heard.

Oh and yes SJWs, I am still calling her Venus Envy whether you like it or not. I’ve known her by that name since 2007, and that’s not changing at all.

Yet I find it ironic that her Gamerpic has her mouth crossed out. Symbolism at its best, though she told me that it’s been like that even before all of this happened.

You all know what to do: