Gaming Should Be For Everyone!

There are times that I sit down and write my column that I have to wonder what is wrong with our collective humanity. I have dealt with the worst of what rabid fanboys can offer. Whether it is sending death or rape threats to a voice/motion capture actress who has nothing to do with a game having timed console exclusivity, or wishing for the son of a rival console owner to grow up mentally disabled (yes I have seen all of this,) it just keeps getting worse.

And just last week it was taken to a whole new low. In what should have earned a collective show of support about a new way to bring all gamers together, Microsoft announced their Adaptive Controller, designed to provide more gaming accessibility to the disabled.

Now if you recall in some of my past columns, I favor anything that would benefit those who can’t play to begin with, and any form of gaming that can help out with someone’s affliction is a huge plus for me. Imagine if you had some kind of disability that prevented you from playing games? I assume you like games if you are here at Gameindustry.com watching all our coverage. So what if you could only watch other people playing games, but had trouble participating yourself due to some impairment? Personally, I think that would be terrible, and anything that can be done to help out is something that I will fully support.

We need to get more gamers involved with movements like this, and though I can see the Xbox Adaptive Controller also being used for PC gaming via Xbox Play Anywhere, I really wish that Sony and Nintendo would come up with something similar. After all, gaming is awesome, and everyone should be able to experience it regardless of whatever physical disability someone might have. I get that many of us have a favorite console, but don’t you think we could all come together over something like this, regardless of who thought it up first?

What has me so riled up this week are the reactions to the Microsoft Adaptive Controller. Some of this is coming from those who hate all things Microsoft and Xbox, and some is coming from those who believe that we should not be wasting our time trying to help disabled people enjoy games. Don’t worry, I deleted the identity of the people whose tweets I am sharing. And I didn’t use any of the truly offensive ones, so if these look a little tame, they are the only ones I felt I should share. 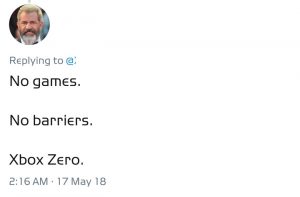 To no one’s surprise, those who hate Microsoft are all jumping on the “Xbox has no games” lie. 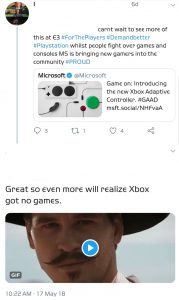 There are also those who even went as far as mocking the console’s design, making it sound like it is based on a portable stove. 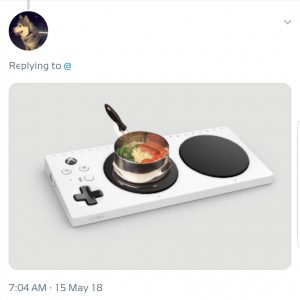 Even worse, in a message retweeted by Twitter user @_amiR151_ , even Sony’s own Middle East Twitter page decided to make fun of the Adaptive Controller. Please note however that according to @amiR151_, “just to clarify the incident was two days back when the info was leaked and I mentioned their marketing manager for the same…it seems that they deleted the tweet.”

Even if they did delete the tweet, for one of Sony’s own Twitter pages to make fun of a controller that is designed to assist those with disabilities, that is just downright insulting. I really hope that the person who wrote that tweet got some sort of disciplinary action for it.

Then again, the official Sony threat was just jumping on the bandwagon it seems. 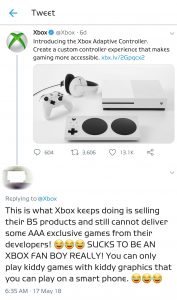 I really must ask these people. Is your little piece of plastic REALLY that important to you? Do you have any sense of human decency left in you? Or do you feel so holier than thou to make fun of something that would allow MORE people to play games just because your console manufacturer of choice did not come up with the ideas themselves? Here’s a little recommendation to you. Rather than make insipid lie-filled lines like “more people will realize that Xbox has no games” how about contacting both Sony and Nintendo and asking them to consider ideas such as this? That way they might actually take your ideas into consideration, and who knows, come up with adaptive control methods of their own. That way everyone would be happy and disabled gamers would have even more choice when it comes to what and how they play games.

Or just keep being your usual fanboys selves and not add anything of value to the equation. I am going to finish with one last thought. Microsoft announced they are teaming up with the Special Olympics for a Forza 7 tournament. This will be a milestone in eSports history, and supporting this event, no matter which console you happen to like best, will be good for the entire gaming community. So please, instead of making fun of something like this, please support these efforts to bring as many people into our beloved hobby as possible.

Currently Playing: The Witcher 3: Blood and Wine (Xbox One X)