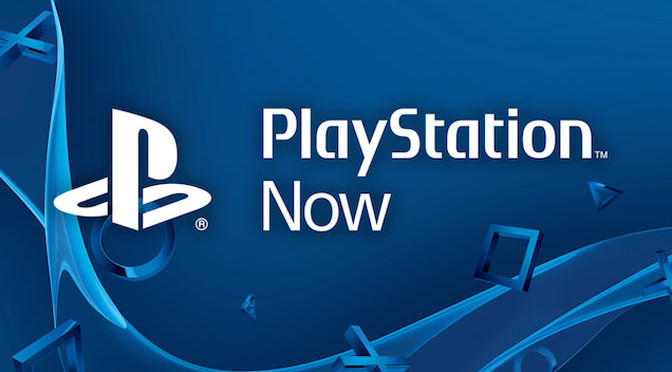 This is turning into a battle between PlayStation Now vs. EA Access. Ok everyone, you did not misread me last time. Yes, I did buy a PlayStation 4. Yes I am playing it, and yes I plan to do my full take on it in an upcoming column. Originally I planned to do so this week, but events of the past week caused me to change my schedule around.

Yes it is game distribution service time, dear readers. As someone coming off a strong second opinion of Steam with my new laptop (though some games are still causing me problems… *cough* Red Faction Guerilla *cough*) I knew that I would eventually have to give PlayStation Now a try. After all, the beta was released to the public over the previous weekend.

But before we get to that, I need to go over the other elephant of PlayStation Now: the pricing structure. Yes I know that PlayStation Now is currently in beta, and prices will most likely change, but the way they are now, it’s a cash grab. I heard stories about some games, such as Deus Ex: Human Revolution costing as much as $5 for only 4 hours of gameplay. I thought that alone was too much to get a tryout of the gameplay. But then I came across this, and my mouth just dropped: 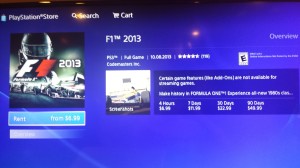 Are you kidding me? SEVEN DOLLARS FOR ONLY 4 HOURS OF GAMEPLAY? Thankfully this is the only game I came across that cost this much, though NASCAR ’14 went for $6 for the same four hours. But let’s move away from the four hours for a second. Look at the cost for 90 days. $50 to rent and stream the game! As a comparison I checked several sites to see how much I can get them used. Best Buy was the only site that had a PS3 version available pre-owned, and that too was $50, but you have the actual disc to keep as long as you want, instead of having to re-pay again after 90 days. Even my go-to game store, eStarland, had a new PS3 copy listed for $58, and I’m sure it will be much less for pre-owned.

And yes I know there are those who are going to tell me that they don’t own a PS3, just a PS4. I should know. I’m one of them, but you still have to admit the pricing structure is a rip off as it stands.

However, there were some 4 hour rentals I found that were only $3, and I considered them a good testing source for the streaming capabilities. The first game I tested was Ninja Gaiden 3, but before I gave it a try, I did a benchmark of how fast my network connection would be. Sony recommends a wired internet connection with at least a 5Mbps download for good performance, and as you can see here, my connection – despite being from Comcast, and they won’t let me upgrade the speed without calling them in an attempt to have me bundle phone and TV – they are more than appropriate: 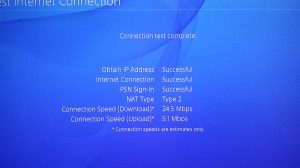 Sony also does a check before you purchase the game to see if it will stream without any flaws, and I will give them credit for doing that so you don’t feel ripped off, and yes, the Ninja Gaiden 3 test passed: 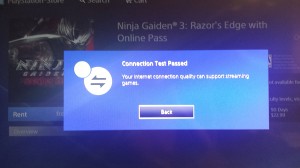 So I purchased the four hour rental knowing my connection would work. When I saw the “Signed In” notification in the corner, I was pleased to find out the interface looked like that of the PS3, even accessing my friends list via the XMB. But after going past the Team Ninja graphic, I was greeted with a non-stop loading screen, making me have to quit back to the PS4 menu. The second time I tried to play, I only had audio but no video. Only on the third time I was able to get the game to play…sort of.

Lag was evident, especially in a game like Ninja Gaiden that requires precise controls, namely blocking. Eventually I got used to the slight lag, because I admit I had the same issue when I played Borderlands 2 on my 360 (plugged into the Xbox One.) But still it was frustrating.
Visual-wise the stream quality was ok. Most of the time it was pretty clear, but a second look at text on the screen did reveal some artifacting that detracted from the experience. For those who love to brag about 1080p graphics on the PS4, I’m curious to see if they will call this out, or blindly embrace it.

However, lag became a more prominent issue in the second game I tested out: Killzone 3. Much worse than what I experienced with Ninja Gaiden, Killzone reached the point of being unplayable. To test out the lag, I did what was known as the “flick test,” which is just a quick flick of the right thumbstick to see how quickly my character reacts. It wasn’t until the thumbstick was fully centered that the game finally decided to respond.

So needless to say, my experiences with PlayStation Now were not the best, and I don’t see myself spending any more money to rent game streams.

But also last week, there was another service that just came out of nowhere and took me by surprise, but in the end sounded a lot more promising, and from a company I didn’t expect something good to come from: Electronic Arts.

Last week, they announced EA Access, a subscription service exclusively on Xbox One. For only $5 a month (or $30 for the whole year,) EA Access provides a “vault” of games to download and keep for as long as you are a member of the service. The program is currently in beta, and for the time being, the games available for download are FIFA 14, Madden 25, Battlefield 4, and Peggle 2. Now I already had Peggle 2, as I purchased it when I got my Xbox One, but downloading the rest of the games, which alone would cost about $100 if bought second hand, ended up being a good deal. The only catch of course is the long time to download these games, especially Battlefield 4, considering it hovers near the 40-50 GB size.

But that’s not the only perk that EA Access has. Digital games can be purchased at a 10 percent discount. I know I won’t use this for sports games, as I usually trade in my sports games right before the season ends, as that’s usually before the trade in value takes a significant nosedive, but for games such as Dragon Age: Inquisition, the next Need For Speed, or the next Mirror’s Edge, or Battlefield Hardline, the discounts alone will negate the $30 yearly charge. In addition, members of EA Access will also get five days early access for upcoming games. It will be nice to play the games in advance, and transfer all my saved data and achievements to the full game once it is officially released.

Slow and long downloads aside, my experience with EA Access has been rather positive so far, which is a huge surprise considering it is EA.

However, there are those who are not doing the research when it comes to EA Access, and are claiming that it is a streaming service similar to PlayStation Now, which it is not. Case in point:

And of course Sony turned down EA Access because of their claim that it does not provide “value” to PlayStation consumers. As if $30 for a full year access on MULTIPLE downloaded games is not a good value compared to paying $7 for four hours of one streamed game.

I’m really hoping that Sony does fix their prices, and works on the lag, because right now, it looks like EA Access is turning into the better value, and PlayStation Now might end up hurting Sony more financial wise. As if they weren’t hurting enough already.

Waiting for: The EA Access Vault to add more games, and more value!

One thought on “Streaming for More, or Downloading for Less?”