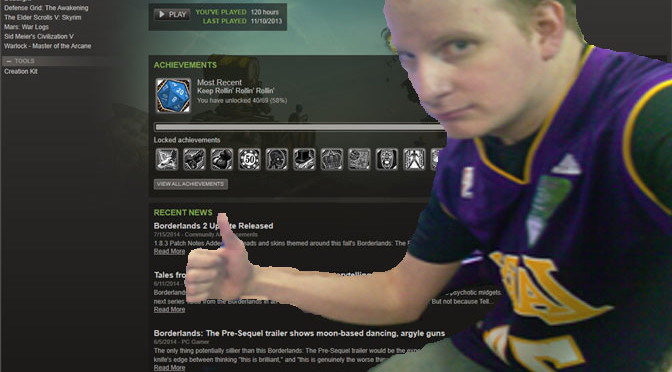 Yes I heard all the insults, and apparently you all know me well enough to call me these. And until recently, I would have had to say this: For most of the time, you were right. Yes, for a majority of my reviews and commentary done here at GiN, you all see that they are games that were released either for the Xbox 360 or the Xbox One, and that is something that I will not deny. I do enjoy both the Xbox 360 and Xbox One, and as I wrote a few columns back, I show absolutely no buyer’s remorse when it comes to both systems.

I’m sure a lot of you will also remember that for the longest time before getting a 360, I did a lot of reviews on PC games as well, as back then I had a top of the line gaming tower capable of running most of the newest games that came out at the time. However there were some problems I had with some games, and that’s started to give me concern about how PC games only cared about catering to those who have the money to get the latest graphics cards.

And then there was the addition of digital distribution services, such as Steam. I remember when Steam first came out bundled with Half-Life 2. I tried playing Half-Life 2 for the first time, and the game constantly froze when accessing the hard drive. Move a few steps, hard drive freeze. Turn around, hard drive freeze. Fire my weapon, hard drive freeze. I didn’t know at the time if it was the mandatory Steam installation or the game itself that caused all these problems. However, in an ironic twist, DOOM 3, a game with more demanding graphics hardware at the time compared to Half-Life 2, ran near flawless on the same computer, adding more to my belief that it was Steam that was the cause of my lockups.

So needless to say, PC gaming was starting to be a problem with digital distribution and the obvious DRM that encompassed it. But shortly after, another huge issue came around that made me want to leave PC gaming for good: Crysis. Or more specifically, the whole “can this system run Crysis” phenomenon. All of a sudden it gave the impression that you needed to spend at least $500 for a decent graphics card. I felt like you had to be exorbitantly rich in order to play a new game at optimal settings, especially after hearing about the NVIDIA GeForce GTX Titan cards that retailed for upwards of $3,000.

It was then that I started hearing the terms “PC Gaming Master Race” as opposed to what I was considered, a “Console Peasant.” For the longest time I supported being a peasant, saying I’d rather pay only upwards of $500 for a console that I would know would last several years compared to a computer that would be obsolete in just a year or two.

But then, something happened that made me think twice about my past opinions. The hard drive on my MacBook, a computer I used for the past four years, failed, as well as half the LEDs on my display. As a result, I was without a computer.

Thankfully I was given a loaner PC, an all-in-one desktop system with a Steam library allowing me to try out tons of games to see how they would run. Admittedly the system was not top of the line, but the fact there were many games that ran at a competent level was a surprise to me. It made me think twice about Steam and its DRM and appreciate it more.

And then I finally bought my own laptop, an HP Envy laptop with a big 17-inch screen. The specs of it are fairly top of the line: Core i7 processor, 12 GB RAM, and a 1 TB hard drive. The only part that concerned me was the lack of a dedicated graphics card, but rather an integrated graphics chipset. I still had fears it would not have been designed for quality gaming.
I was wrong. Deeply wrong.

Not only did this laptop run current games quite well, but at Xbox 360 quality. Sure most of the games I run are set at 720p resolution, but I am one who prefers performance over high graphics quality. Plus the access to Steam makes playing these games much easier. I have been told about all the mods that can be done as a result of the PC architecture as opposed to consoles. I hope to experience them soon too, but in the meantime I have one thing to say to PC gamers, but not to the extremists of the “PC Master Race.”

Does this mean I’m going to leave consoles behind? Certainly not. I will still play on my 360 and X1 and just this week bought a PlayStation 4 (which could be the subject of another column at some point). But I now will be more open to PC gaming and will give it another chance, as long as my hardware can handle most of the great games that come out.

Waiting For: Destiny Beta (Xbox One, which is taking FOREVER to download)