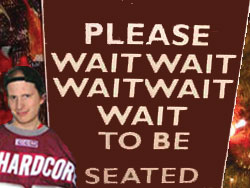 I should have known that when Sony announced that the PlayStation Home Beta would finally be released today, that something would end up messing it up.

Just a few minutes ago I booted up my PS Triple, downloaded the program, a 77 MB file, and even though it took longer than usual to download — I was able to without a problem. Installation as well was not a problem, but then once I get to the connection screen, all I get is a message saying "request timed out." Every time I try to log in, it's the same thing over and over again. Even when being able to get to the EULA and accepting it, once again there it is.

I don't get it, why is it every time there is a huge upgrade to any platform we have to go through this mess? Look at the trouble I had with upgrading my iPod touch to 2.0, and how long that took to upgrade. I mean, combining upgrading that, updating original model iPhones, and (in store only) activation of the iPhone 3G at the same time, and you had a recipe for disaster.

Not to mention that those who upgraded their iPod touches had to pay a $10 upgrade fee when it was released.

Then of course there are the past updates with Xbox Live having major server issues. I still remember what happened last holiday when Xbox Live was down for infinite periods of time. It got so bad that Microsoft had to apologize to Live members and offer a free copy of Undertow as a way to regain loyalty.

Thanks, but no thanks. You should have just given 800 free Microsoft Points to use on whatever we wanted.

Then again, maybe I should not always criticize all the updates that Microsoft has done. With the huge Fall update that just came out they did something very smart. Those who pre-registered to the New Xbox Experience (NXE) Beta actually received the download a day before its scheduled November 19th launch. In doing so, I was able to get the NXE download at the same speed as standard DLC, install it, and be one of the first to get their hands on NXE before anyone else did. It was a very smooth transition and Major Nelson and company over at Microsoft should be commended for making this decision.

I guess I have no choice. Back out to the XMB, select "PlayStation Home" and start all over again. Let's see what happens.

(waits for the Initializing screen again")

Seriously Sony. Like Microsoft and Apple before, you should have planned this out and been ready for all of those who were going to jump into this new service, but alas, you leave us hanging at a boring startup screen.
This is going to be a long night"

Waiting for: PlayStation Home (ok Sony, you got the Beta out there, now how about letting us LOG IN!?)