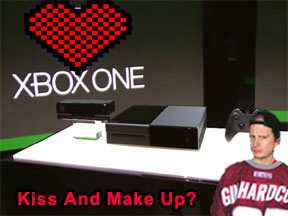 Is Microsoft listening to gamers, or sales figures?

Never before in the history of gaming have we ever experienced what has happened since the end of the E3 Expo 2013 trade show.

We already know most of the story. Microsoft announces the Xbox One weeks prior to E3 and there is tons of criticism about the console. We heard the stories about the mandatory internet check-in once every 24 hours. We heard that games could only be sold or given to one of your Xbox Live friends, and even then only if they have been on your friends list for at least 30 days. We heard that Kinect would be mandatory, as it was central to the Xbox One experience. And we heard about the Family Sharing feature that allows you to share your Xbox One library with up to 10 of your closest family members, Though I know smart gamers who would have created their own "inner circle" to share with to take advantage of that last feature.

Then comes E3, and more details come out regarding the Xbox One, but this time, centering more on the games, something that Microsoft hadn’t done in the past few E3 conferences, as they centered more around Kinect and "entertainment services." I figured gamers would be happy to see this change, but of course they are not, as they only cared about the controversial DRM tactics that were put into place and described in as vague a manner as possible. Add to that the starting price tag of $500, and the fact that only 21 countries will carry the Xbox One at launch, and let’s just say there hasn’t been this severe a backlash since New Coke was announced back in 1995.

Of course, Don Mattrick’s ridiculous comments about people on "nuclear submarines," which could also be considered a personal insult to our military all around the world, not just the Navy, plus telling those who don’t have internet access to just get an Xbox 360, and you have just won the ire of the entire industry. Congratulations Don, you may have just won the Dumbass of the Year award for those comments, and the year isn’t even half over yet!

And of course, we saw Sony’s press conference, and the announcements that won them E3 2013: PlayStation 4 will allow used games, they will not require online access at all, games will be region free (import gamers rejoice,) PlayStation Eye is optional, and most important, the PS4 will launch at $400, the same price I predicted before this all started.

Needless to say, Sony won the consumers over. Sure there are some issues that they have, such as PlayStation Plus now being required for online multiplayer, but I can deal with that, especially with all the free game perks they offer. Heck, Microsoft is jumping on that bandwagon as well, giving out two free Xbox 360 games a month until the Xbox One is launched. Fable III was released before E3, and both Halo 3 and Assassins Creed II will be available in July. But is it enough to win back Xbox fans?

Since E3, Sony has been riding the wave of customer support. Guaranteed Day One preorder sales of the PlayStation 4 have sold out on Amazon, while the Xbox One sales have been slow. Online polls show the PS4 winning by an overwhelming margin, and reports are that retailers that thrive on used games will not offer Xbox One preorders.
Again, that’s retailers not selling the Xbox One. Remind you of the Saturn and Dreamcast war perhaps?

Apparently Microsoft took that as the final straw to break their stubborn DRM policies. On June 19, just one week, ONE WEEK, after the E3 disaster, Don Mattrick pens an open letter to Xbox gamers, saying that Microsoft has listened to gamer feedback and comments, and announced the following changes to the Xbox One architecture.

First, the Xbox One will no longer require a one time check in every 24 hours. Secondly, games can be bought, sold, traded, or borrowed in the same way they are with Xbox 360. And finally, Xbox One games will now be region free. Again, importers rejoice!

All of these updates will require a Day One patch, so still, even if people don’t have network access, they will still need to get online to undo all of these issues. In addition, because of the changes, Family Sharing has now been removed, and digitally downloaded games will not be sold or traded. I can deal with both of those.

For one, Family Sharing was rumored to only allow games to be played in a demo mode until purchased again. And as for the digital download sales being final? Guess what? That’s how they were on Xbox 360 and I had no problems with that.

But there are still some concerns that will need fixed before they will win me back over to the Xbox One. For one, the price. Spending $500 is still way too much for a game console, while the $400 tag makes the PlayStation 4 feel much more desirable. And then there’s the mandatory Kinect. I’m sure most of you, my readers, know my complete 180 towards the original Kinect, but it got to the point that I finally said enough was enough and I packed it up and traded it in for some games. I won’t have that opinion if the new Kinect is mandatory. Will it become more self aware than before? I don’t want to see it take over when I’m watching a baseball game while working on my laptop, or the voice recognition going off on its own any time I mutter the word "Xbox." I don’t need that headache again.

I have heard rumors that the Xbox One will also sell a $400 SKU that will not include the Kinect, and if that’s the case, I might consider one. But still, the Kinect is supposedly integral to the Xbox One’s operation, so I’m taking that rumor with a grain of salt.

The way things stand, I’m still leaning towards the PlayStation 4 for my second next gen console (providing Nintendo finally impresses me and releases more Wii U games.) As for the Xbox One, I’m going to keep a wait and see attitude until I find out what comes up. I do commend Microsoft for listening, but I still think it was not the gamers, but rather the sales figures that pushed them over the edge back into sanity. They still have a way to go to win me back over, because the DRM is a hard pill to swallow, even with it being eventually, and apparently reluctantly, removed.