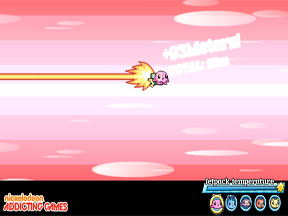 This week I found myself wasting time with Rocket Pets. Rocket Pets is one of those ‘shoot yourself out of a cannon and see how far you can go’ kind of games. I already felt good going into the game because I saw it was made by JayArmstrongGames (whose games I’m a fan of). I even reviewed a fun little platform/adventure game by them called Kit and the Octopod back in 2011 (man, didn’t realize it was that long ago).

The idea behind Rocket Pets isn’t really anything new. You have a canon, you shoot your pets out of it and you collect coins while seeing how far you can go. I’m not saying this is a bad thing, I find these types of games to be really fun and addicting (Burrito Bison anyone). Rocket Pets does mix up the formula a little bit by adding multiple characters to play as and including platforming elements.

There are five pets total (all of which have weird names like Domo Monkey or Moshi Moshi Dog), and each pet is equipped with a rocket pack that they will use to traverse the levels. Also each pet can be upgraded with a better rocket pack and coin magnet. Each pet also has a variety of hats that can be bought and worn. I enjoyed the hats, sure it was a way to make me blow money, but some of the hats were famous internet memes such as troll face and the Lazer mouth, and wearing them made the game more enjoyable than it should have.

There are four different planets that can be explored. The first one starts out easy enough with simple spike pits to jump over and a missile to dodge every so often. The last level is the complete opposite. Spike traps are everywhere, missiles come quite often and there are plenty of deathtraps.

A perfect example of a deathtrap is shown in the picture included with this article. The jump that has to be made to make it over that spike wall is impossible. I’ve used a maxed out rocket and just held my head against the roof right before the jump, couldn’t make it. It wouldn’t bother me so much if all the traps could be avoided, then I would at least feel like it was my fault for getting caught in the trap.

Rocket Pets looks great; levels have interesting designs and colorful backgrounds. The pets remind me a lot of stuffed animals and the different hats that can be gotten range from ridiculous to awesome.

Audio is in the same department as the visuals. Each level has its own soundtrack and they are all upbeat and catchy. I’ll probably be humming Rocket Pets songs frequently for the next few days and I’m sure I’ll hum some of the songs years later while I’m on a long road trip.

Rocket Pets is a great game to kill some time with. It has a unique feel to it and the colorful characters and environments make it a real blast.