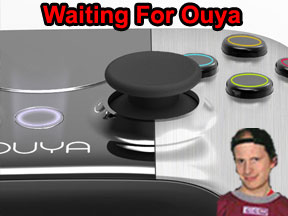 There have been many up and coming systems try to compete against the big names. I still remember when I first went to E3 back in 2000 and we were introduced to a concept system called the Indrema L600, a Linux based game console that would even go as far as running free software on it, as well as function as a CD player, DVD player, and even as a DVR. It was ahead of its time, but never made it past the concept stage.

Then of course we had the legendary (for all the wrong reasons) Infinium Labs Phantom. Shown at E3 2004, it was a console that would distribute its games via digital download (which we now see on every console and PC) but was never released, eventually becoming vaporware. What became of the Phantom? Only a Lapboard controller was released.

But what about the underdogs that were released? I usually bring up the Tapwave Zodiac as an example. It was a handheld gaming console running on Palm OS and worked well as both a PDA and game console. But sadly it did not get the support that it strongly deserved and was discontinued in 2005 due to competitive pressures from both the DS and the PSP.

I could say the same fate would hit the Gizmondo, another handheld that was released in 2005, but everything about it was wrong. A version of the console forced you to watch ads while playing (though that looks like it’s going to happen again today. Thank you Sony!) It also had a very small number of games available for it. Sticky Balls anyone? And then of course, one of the company’s executives even had ties to the Swedish Mafia. How would that not help sell systems?

Yes I have seen a lot of up and comers fail, but then again there are those that were successful. Look at what I originally said about the OnLive on demand service. I didn’t think it would work out well but it seems to be going well good and is playable. So yes there is hope for the future.

And that brings me to Ouya. What is Ouya you ask? It’s a planned $100 console running the Android 4.0 (Ice Cream Sandwich) operating system with an NVIDIA Tegra 3 processor (the same one being used on many Android tablets today) with 8 GB of storage. It will allow any developer to make games for it, and even better, all the games will be free!

Even better, it has some pretty strong backers on the project, such as One Laptop Per Child developer Yves Behar and Amol Sarva, who was responsible for Peek email devices. It even has the support of former Xbox backer Ed Fries, for crying out loud!

Funding for the Ouya is being done through Kickstarter donations. Now normally I am a harsh critic of services such as Kickstarter and Indegogo because to me they just seem to be another source of e-begging, but in this case I will defend it. The funding has already reached its goal of $950k, and I am curious to see how much more interest this will gain.

I’m curious to see just which games would come out for the Ouya. After all it is running on Android, and I have experienced the OS both on my cell phone and on a tablet. And yes, it has completely converted me from iOS. In fact, I traded in my iPod touch a few weeks ago due to lack of interest.

It will be interesting to see how the Ouya can translate the Android architecture to the big screen. I wish them luck and hope that it will end up becoming a real product and not just more vaporware.

And to think, if I can link an Ouya up to the same Google account I have my phone and tablet on, I will be in gaming heaven.

More info on the Ouya can be found at ouya.tv.

Waiting For: Borderlands 2 (Can I PLEASE kill ClapTrap this time?)