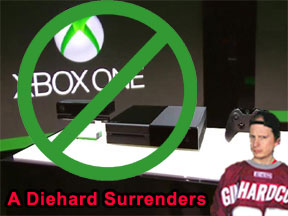 How did it come to this?

I never thought I’d ever see this day come. Two weeks ago when I wrote my last column I stated my opinions about the Xbox One, and the concerns that kept crawling into my brain.

All we’ve heard from the Xbox One since its reveal at the end of May was about how it was going to be an all-in-one entertainment system, but the issues about privacy and used game sales were left unanswered. That’s not to mention the "always on" internet connection that Microsoft did not want to discuss.

Of course the masses of the internet took up arms, and everywhere I went: Facebook, Twitter, Tumblr, Youtube, Nintendo’s Wii U communities, and even from my friends, all I heard was excessive hatred towards the Xbox One.

Before then, Microsoft even presented a way how these issues would be addressed. We heard that the console must check into the internet once every 24 hours, how discs can be handed over to only ONE person (who then must keep it) and that person had to be on your friends list for at least 30 days. The flames of hatred fanned more than ever before.

Alas, E3 came, and I watched the Microsoft Media Briefing. It started off pretty decent, with games being shown for Xbox 360, and news that Live subscribers would get two free games per month. Granted they are earlier games, but better something than nothing. The switch from Microsoft Points to real currency is also a plus.

But then it was time to talk about Xbox One, and we were promised it would be all about the games, something that many in the past complained that Microsoft never did. What was shown varied between average and amazing. Ryse, a game that started as a Kinect based fighter, is now a God of War style bash-em-up, complete with QTE events. Forza Motorsport 5 featured a new cloud based Drivatar AI which caught my eye. Dead Rising 3 was announced as an Xbox One exclusive. And something I never expected, though wanted for a very long time, was announced: Killer Instinct! I will get to that later.

Respawn Entertainment even ended the show with their unveiling of Xbox 360/PC/Xbox One exclusive Titanfall, which for a cross of Call of Duty and Mechwarrior, looked very impressive.

So needless to say, the games looked pretty good on the Xbox One, and much to my surprise, with the exception of Kinect Sports Rivals, there were no other games that ran off the new Kinect.

But then it was downhill for me. We did not hear any mention of the issues that concerned us: the always on, the privacy, and the used games. But then came the price tag: $500. Many of those I talked to, myself included, thought $500 was way too much, and memories of the Saturn and 3DO, even the PlayStation 3, started dancing in my head.

It also didn’t help that the game I was interested in most for the Xbox One, Killer Instinct, is not the KI I knew and loved. The game is being developed not by Rare, but by Double Helix, and we already know their poor track record. Even worse, Killer Instinct is going to be a freemium title. Jago will be given to players for free, but to get the rest of the characters you have to pay for them. How is this going to work in a fighting game? If they did that what Mortal Kombat or Injustice did, and offered a main batch, with several bonus characters offered as DLC, fine. But ONE CHARACTER? Hasn’t Microsoft learned from Namco’s Ridge Racer Vita debacle?

After the press event, I told a friend of mine, one who is a huge fighting game fan, about the Killer Instinct scenario, and the $500 price tag. His response was "you watch Sony do like they did with the PS1 and offer the PlayStation 4 for $100 less. If they do, it’s over."

So we jump to the Sony press conference, which I tried to watch on my computer when the stream decided not to lag. I admit I wasn’t looking towards much with the PS4. Even when the system was debuted, I thought it looked like a cross between a PlayStation 2 and the Japanese Sharp X68000 computer. It wasn’t a bad design to begin with, but it interested me. Sadly I wasn’t able to see much about the games without all the network lag, but like everyone else, it was the final series of knockout blows that Jack Tretton said that caught my eye.

"PlayStation 4 will not restrict used games."

"PlayStation 4 will not require an internet connection."

Indie developers can create their own games."

And even after all the crazy cheering came to an end, there was one more thing, one that I predicted would be the death blow to Microsoft.

Yes, it was Saturn vs. PS1 all over again. And that’s got me wondering. Remember how retailers such as KB Toys refused to carry the Saturn (and eventually the Dreamcast) because of being left out of the Saturn launch? Will retailers, especially those who specialized in used game sales, refuse to carry the Xbox One or any of its games? It will be quite interesting, especially since the Xbox One is going to come out before the PS4.

It’s easy to say that Sony won E3 this year, and Microsoft can’t seem to do anything right lately. Windows 8 is hated, Windows Phone lags far behind iOS and Android, Surface isn’t selling as well as other tablets, and now the Xbox One is limping out of the starting gate compared to the PlayStation 4.

To think the last few years I’ve criticized Jack Tretton and Sony for his comments. Remember the $1,200 promise he made at EGM regarding the PlayStation 3? Well, he’s more than made up for it with the PlayStation 4 announcements. Now it’s Don Mattrick from Microsoft who is making the dumb comments. Case in point, let me leave you with this.

So does this mean you already expect the 360 to succeed while the One will fail? Sounds like the Atari 5200 all over again to me!