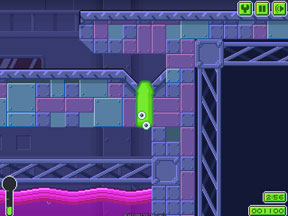 After spending days surfing the internet I finally found a game that was Time Waster worthy! What game you ask? Slime Laboratory, my friend!

Slime Laboratory is a physics based platformer with some mild puzzle elements thrown in. The game revolves around a sentient slime trying to escape from the slime laboratory. There are many challenges awaiting our goopy green friend on his (or her, hard to give slime a gender) way!

Our green slimy friend (who I think I shall name Gumbo) doesn’t control like just any other protagonist in a game. Gumbo is somewhat slow, which comes with being a sticky slime ball. He (yes I’ve decided Gumbo is a male) can’t jump all that well and his best trait is being able to fit almost anywhere. I know this doesn’t sound like someone ready to make a daring escape from a laboratory, but just wait.

Gumbo has a few special abilities that will make his escape easier than what one would believe. For example, Gumbo can pick up other pieces of slime to grow bigger. The bigger Gumbo gets, the higher he can jump and at his full size he can even break through walls. Another one of Gumbo’s neat abilities is to climb ledges. I’m not saying he can go straight up walls, but if Gumbo barley misses a jump sometimes he can pull himself up to the ledge.

Despite being a pile of slime, Gumbo isn’t invincible. Lasers, spikes and acid all still have deadly effects on him. Which is a little weird considering I’ve stretched Gumbo to the point that one of his eyes was no longer connected and he still came back together, but heroes do need to have weaknesses or else they would be boring.

There are fifteen different levels in Slime Laboratory and while they aren’t overly difficult, they will leave poor Gumbo dying over and over again. Of the levels, there are two different types. First we have the basic side scrolling levels. Gumbo has to traverse some tricky jumps and solve some simple puzzles before he can move on. Then we have the vertical levels. These levels reminded me a whole lot of the Metroid games. Every good Metroid game ends with a timed sequence where Samus must escape before something explodes. It’s about the same thing in Slime Laboratory except acid is constantly rising below Gumbo and his only salvation lies at the top of the level.

The presentation of Slime Laboratory is great. The classic looking graphics are appealing to the eye. Gumbo in particular had a lot of attention paid to him. His hit boxes are as close to perfect as it gets, which is impressive since he is frequently changing shape, and that alone let me know that dying was completely my fault. How he molds and moves around levels is impressive. My only major complaint is that there are only three songs in the game: one for the title screen, one for vertical levels, and one for normal levels. There are more normal levels than anything else in this game, and while the music is nice, half an hour of the same song being looped over and over again gets old.

I really enjoyed Slime Laboratory. It was a fun puzzle platformer that gave me a good challenge. Now if only it had a different tune to play every other level.