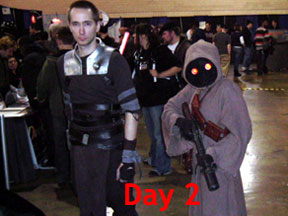 It’s getting better, but not quite there

Last year’s VGXpo was a major disappointment. Whether it was the small scale of the event compared to previous years or the torture of trying to reach the Pennsylvania Convention Center, I wasn’t happy with the results and made a couple requests for this year’s show. This year thankfully was somewhat of an improvement, but in my opinion, VGX still has a way to go to get back to the glory days when it was being held at Valley Forge.

Fortunately this year it was much easier for me to get to the show. There were no major traffic holdups causing traffic to stop for periods of twenty minutes. Parking, while still expensive (I spent an average of $12/day) was more accessible and I managed to get to my events on time.

Already I saw an increase of vendors that I was interested in checking out. One exhibitor that caught my interest more than anyone else was TN Games. Their key product is a feedback based gaming vest. Rather than basing feedback on vibration as done with past iterations (i.e. the Interactor,) this vest has eight sensors (four front, four back) that provide point specific pressure feedback sourced from a plug-in air compressor. The feedback provides a small punch to the area affected and the results are quite impressive.

At first it almost reminded me of those massage chairs located in malls as their pressure literally pushes into your body. Eventually I got used to the feedback and came away impressed. A PC version will be available soon, with consoles to follow. I’d love to see how this would work on Gears of War 2. Can you imagine feeling that when revving up a chainsaw bayonet?

Another huge vendor on site was Interactive Technologies, who had two products to unveil. The first was called GaminRide: a drive in trailer cab loaded with game consoles (360, PS3 and Wii,) large LCD monitors and amplified gaming chairs, all in a comfortable air-conditioned setting. Their other product is iDance, which features 32 wireless dance pads hooked into one PlayStation 2 setup running what appears to be a workout version of In the Groove. Both features drew a large crowd, and while I wasn’t able to try out GaminRide, I did get iDance a try. For someone who hasn’t played a DDR game in over two years (thanks to Guitar Hero and Rock Band taking over,) I really enjoyed myself.

Another impressive display came from Wondergy, who unveiled laser technology based products. Their most impressive feature was the ability to play an old vector game, Asteroids, but this time using a laser show based projector. Surprisingly the game ran great and it drew a huge crowd.

Of course, VGX had the usual features, the classic game arcade (all set to free play, at least 80 percent of the time because some of the games had to be re-credited,) the tournaments (which of course included Smash Bros. Brawl. It’s always there,) cosplayers galore (tons of Star Wars characters, but then again, teaming up with an Anime Expo this year helped out a lot,) and of course, the classic game vendors.

In fact it was while checking these vendors out that I came face to face with Internet phenomenon James Rolfe, aka the Angry Video Game Nerd. Not only was the Nerd willing to take some pictures with me for this commentary, but he also recorded a bumper for GamerGeeks. I hereby thank him for that, and look forward to seeing him rip on the CD-I’s “Unholy Triforce.” (Yes, I know the episode is available online but as of writing this I have not seen it yet.)

Sadly the whole show was not wine and roses. For once thing, one of my biggest demands to come back was to provide after hours entertainment. VGX’s staff listed their after hours shows on their website prior to the event, and even said there would be some bands performing as well as a VIP based event which would be held on the lower level. Well, the bands were a bit underwhelming, and as for the VIP event? Despite my being promised access due to having a press pass, don’t try telling that to the rentacops in security or the brain dead bouncers who would not provide me access (let alone complaining to me that they didn’t get to eat all day. Cry me a freaking river you thug!)

And yes we had speakers on site, but nowhere near the level of Lorne Lanning vs. Jack Thompson (with a whiny N’Gai Croal as “moderator.”) The one I was interested in seeing was the hot headed creator of God of War, David Jaffe. But what came of that? Cancelled! I don’t know why it was cancelled but I am sure I can come up with some good conspiracy theories about it.

In short, VGX is getting there. While it wasn’t the disaster it was last year it is – like E3 – trying to reclaim its roots. Still, I wish they would move back to Valley Forge which I always felt was the perfect venue. It’s got easier access, a smaller floor to keep everything concise, and a lot more fun.

Waiting For: The Dark Knight (Blu-ray)