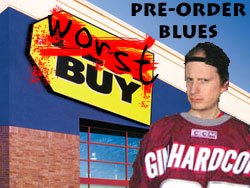 Or Anyone Want to Buy a Used Standard Halo 3?

Once again, it seems the power of the press has come into play. The exact day that my column where I demanded Microsoft get my repaired Xbox 360 shipped back to me gets posted, I get a notice from Microsoft stating that my 360 was shipped via UPS with a Wednesday return date.

Thankfully the return date was right on the money and I received what appears to be a brand new 360. The manufacturing date is listed as 9/6/07, and although it doesn't have an HDMI port (as most of the new 360 Premiums are said to have,) it is still great to have my beloved console back. Heck, I usually play it through VGA anyway!

Of course I went back to what I had waited three weeks for: playing Space Giraffe (yes OXM, it is still that good,) NHL 08, and Bioshock, downloading Puzzle Fighter HD, and watching the first season of Heroes in HD-DVD.

But still, with all this on my plate, there was still one thing on my must do list: Halo 3.

Three years ago I was one of the harshest critics with the ending of Halo 2. The cliffhanger ending was the first true ending to have me screaming at my television, a feat I have not repeated since the series finale of The Sopranos. (Damn you, David Chase!) Since then I asked what happened? Did the Prophet of Truth fire up all the Halos in the galaxy? What did Cortana tell the Gravemind? And worst of all, will I suffer another Raiden complex and be forced to play as the Arbiter again?

It was all this waiting and questioning that made me do something I vowed I'd never do again: preorder Halo 3. Now I'm sure many of you read all my problems with preordering from stores, how they always find a way to screw me over. Losing shipments, claiming they are being held in a Memphis warehouse or by Miami airport security like some case of blow from Scarface, or because incompetent retailers aren't able to work their own computers, and leaving angry customers outside in the pouring rain. Need I go over the whole Gears of War incident again? I'll still never forgive EB/Gamestop/whatever they call themselves now for that, and will let them know every time they bug me for a preorder!

But this time I decided to order from someone else: Best Buy. Since I wanted to get the Legendary Edition (the $130 monstrosity that included three discs, a replica Master Chief helmet and stand which doubled as a storage case for the discs,) I put $5 down and asked the sales rep if they would do a midnight launch. She said "yes."

Now that was back in July. While checking out the new iPod touch, and saying it wouldn't be in on time like most of their stores say. I even had the audacity to say they would not have Halo 3 available on time either. In my case, on time being 12:01am on Tuesday, September 25th. The blue shirt (my term for a Best Buy sales rep) simply said "We'll see you here that night. We'll have it."

In other words, they would have a midnight launch and I would get my Legendary Edition of Halo 3, right? Well as Lex Luthor said in Superman Returns, WROOOOOOOOOOOOOOOOOOOOOOOONG!

I get there at 11pm and there are two blue shirts outside. They tell me and everyone else who showed up that they never planned on doing a midnight launch, never said they were (so why were they standing outside the store in the middle of the night waiting to turn a bunch of angry people away) and wouldn't have them available until 10am the next day. All this after I told my colleagues that I would meet up with them on Live.

So once again I am screwed over by preorders and I had only one option left, to get a standard edition. Luckily for me there was a midnight launch at the local Gamestop, but I have my other issues with going there. It seems the staff there has a thing against me, just cause I bust on them in my column from time to time.

They never have titles when I want to pick them up, and the manager there knows my stance on preorders, especially after the Gears of War incident. Thankfully I was able to get the Standard Edition, but not without issues (they had to reset the credit card reader.) Still despite this, I also ended up getting the Legendary Edition as well the next morning, and now have two versions of Halo 3 for the time being. But once again, this just proves my point of why I never pre-order. I will get screwed over no matter what, and so might you if you are not careful.

And while I'm at it, does anyone want a lightly played Halo 3 Standard Edition? I'll take $45. Anyone? Anyone?