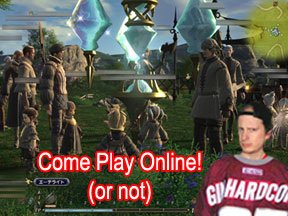 And then there are moments like today that make writing these columns all the more enjoyable.

Until about 7pm Wednesday night (the time this column is being written,) I had several column ideas in mind: having to save 22 GB of hard drive space to install Rage on my 360, or the fact that I would love to see classic franchises such as 2D shooters return to glory (even going as far as wondering why Konami keeps pushing back Otomedius Excellent, wondering if it’s another attack of MW3-Phobia.)

So I am ready to sit down, play an episode of South Park in the background, and write my column. All of a sudden, the greatest news I may have heard this year was found.

It seems that my complaints against MMOs and the Final Fantasy series has finally resulted in even Square Enix admitting their biggest mistake.

But even better, Final Fantasy XIV is the game where Square Enix themselves had to apologize multiple times about its poor quality. All of the negative press that FF XIV is fun to watch in itself, but what I read today was just the icing on the cake.

According to the Spoonichi Annex, which received a rough translation from Japanese to English, Yoichi Wada, president of Square Enix, claimed that they are continuing "reform work" on Final Fantasy XIV, "which basically amounts to fully redoing the game, and hope to revive the FFXIV that should have been released."

Wada also commented about Dragon Quest X which is also to be an online title, but said "we’ll continue with a variety of developments, offline included."

As for Final Fantasy as a whole, what I am about to say comes from Wada’s mouth himself, so don’t send any angry fanboy comments my way.

"The Final Fantasy brand has been greatly damaged."

I really want to try to remain professional on this. After all, I am a member of the gaming press. But this is one of the few times that I cannot do so. This is one of the biggest cases of "I told you so!" The Final Fantasy series has been going downhill for a while, and even some of their most stringent fans are feeling the same way. Same for MMOs, they are starting to feel a decline as well, especially the "pay to play" models. See a lot of MMOs lately that are now turning to a free to play model? Times are definitely changing…and do I have Final Fantasy XIV to thank for that?

It’s moments like these that make me say…I love my job!