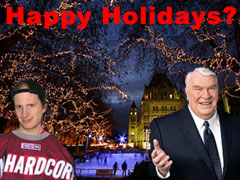 Thank God that football season is back. Here we are in the second full week of preseason. The Redskins will be closing up training camp, which might be the best thing after what I did last week. I asked a coworker if any Redskin players would get hurt during the first preseason game, and go figure, Clinton Portis is out with a separated shoulder. Usually all the injuries come when I say a team is going to do well after simulating a game on Madden, not before it is even released!

Surprisingly nothing has happened with Shawn Alexander yet. After all with him being on the cover of Madden NFL 07, we should expect him to join the likes of Donovan McNabb, Michael Vick, and Marshall Faulk as those who have suffered the results of the Madden Curse. We'll just have to see if the curse continues or if it will skip a year.

In the past, EA Sports came up with some rather creative advertisements for the launch of the most recent Madden release. One of my favorites came a few years ago in a print ad featuring a sad, but cute looking blonde looking down and at the bottom were the words "The new Madden NFL season kicks off August 14. Break it to her gently." But near the end of the ad the text says "Available August 14. Maybe you two can still be friends."

I ended up doing the same thing to my girlfriend, and lucky for me she is still with me to this day.
Another ad took advantage of the fact that a lot of people take the day off to play Madden, so EA Sports decided the best thing to do was print up a doctor's excuse allowing people to quit school and work in order to play Madden. Sadly it didn't work for me and I had to go in to work that night.

This year, the theme is "Happy Maddenholiday," where EA is treating the launch of the Madden NFL season like it's Christmas, even going as far as singing Christmas like carols and featuring two separate Advent Calendars, one of EA's Madden 07 website, and the other as a daily download on Xbox Live Arcade for 360 owners.

Another tradition I have noticed with the launch of Madden are the supposed midnight launches at EB and Gamespot, and in turn, I like to collect all the excuses these stores have when the game is not available.

In the past, I have dealt with classic lines such as "the FedEx shipment was lost in transit," "we haven't received our shipment yet," "today's the shipping date," and of course my personal favorite, "it's being held back by airport security."

But even that doesn't compare to the incompetence that EB demonstrated last year. One of the few times I actually decide to preorder was for Madden 06, and what EB did was inexcusable. They were supposed to open at midnight, but didn't open the doors until 12:45 because they claimed that their computers were not working. Add to that the fact that it was raining heavily, and when the doors finally opened, they wouldn't allow more than two people in the store at a time.

Why, you may ask? Because of fire code reasons! What a joke. There are more than two people in the story at any time during the day, why not now? Maybe the employees should stand out in the rain for a change and face a little empathy!

This year's Madden will be a unique experience, especially for those who are playing on Xbox 360. Sure we had Madden 06 for the 360 last year, but it was so limited, and as I called it, the game was nothing more than a sneak preview of this year's game. It will be interesting to actually be playing High Definition Madden the way it is meant to be played, and the best thing is, that it will be available only on the Xbox 360 at the start of the NFL season.

Both the PlayStation3 and Nintendo Wii owners will have to wait until their respective systems come out.
Now if only EB will get the midnight launch done right instead of coming up with a whole new excuse!