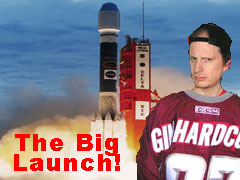 For the last few weeks, my mind was not directed towards gaming. The night before I turned 30, I took my girlfriend out to dinner only to have my car break down on the Dulles Toll Road. It turns out that something in the engine block came loose, and rather than spend several thousand to repair the engine, I decided to save up and buy a new car.

My luck improved just this Wednesday, when I lucked myself into a 2003 Hyundai Accent with only 3,000 miles. Thus, I am back to gaming, and I'm finally able to get something off my chest that I wanted to since E3.

Electronic Arts' biggest highlight of E3 wasn't the annual EA Sports lineup, or the announcement of the Sims 2 or the Urbz on console, but rather the official announcement that EA officially jumped on the Xbox Live bandwagon.

Since 2002, the only way to play EA Games and EA Sports titles online was on the PlayStation 2, and if it weren't for that (and eventually, Final Fantasy XI,) the PS2 Network Adapter would have probably eventually failed. Now Xbox Live members who felt screwed over by EA's PS2-only attitude are celebrating.

Still, one has to wonder why the sudden change of attitude from EA? In my opinion, the lead can go to one person only: former Electronic Arts president John Riccitello. Riccitello was the one individual who insulted Dreamcast owners and fanboys with his infamous comment that was published in Next Generation magazine: "The one dollar we spent on Dreamcast marketing is one less dollar we spend on PlayStation2."

Even with the Dreamcast being the first console to offer true online gameplay, proven by record sales of NFL 2K1 despite the PS2 receiving the next-gen launch of Madden 2001. Still, even with 2K1 as the only online football title available, Riccitello stuck to his PS2-only (for next-gen consoles) stance.

From that moment, I knew that John Riccitello was deep in Sony's back pocket, and even mentioning dollars and marketing sealed that evidence. Of course, that bond he had with Sony continued when Microsoft released Xbox Live, offering online only with the PS2 adapter.

However, times are meant to change. Earlier this year, John Ricitello stepped down as president of EA, and in his place came in Larry Probst. With this change, I knew there were going to be some major changes, and if anyone who read my E3 preview paid attention, they would have read my rumors about an ESPN Videogames (Sega) and EA Sports (Madden) merger.

It turned out to be wrong, but something did come out right with the Xbox Live announcement. Now ESPN's biggest Xbox advantage has been taken away from them just in time for football season (EA's NCAA Football 2005 will be released in mid-July). The only option ESPN/Sega has is to reduce the price of ESPN NFL 2K5 to $20. Even with that though, I don't think it will help make up for what I consider to be EA's smartest move in a long time. Now if only EA will offer player names for NCAA 2005 so I don't have to type in all the Seminole players again.

Things would be perfect.