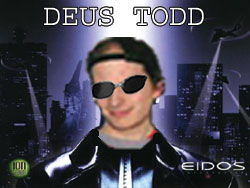 Deus Ex: Human Revolution. A game series I waited a long time to get back into, and a series that I had a rocky relationship with. The original Deus Ex (aka The Conspiracy on PS2) was a classic. One of the few games from the failed ION Storm (of Daikatana infamy) to actually come out and be pretty darn good, it ended up being one of my most favorite games of 2000. It had a deep story, multi-layered gameplay, choosing a fine line between stealth or guns blazing, and was just a blast to play.

I couldn’t say the same thing about its sequel, Invisible War. To me it just felt more simplified in comparison to the original. While it did offer more branching paths, it still felt more like it was dumbed down for a console audience. It wasn’t a bad game, far from it, but it just didn’t fit my style that well.

Now eight years later, the prequel Human Revolution is out. We already reviewed the game and it scored a perfect 5 Gems. But if my first few hours into the game were any indication, that would not have been the case at all.

Now I’m sure you all will be saying that I had problems with the tutorial mission. In fact I know some people who were so frustrated by that mission alone that they quit playing. That wasn’t the case for me, for with the exception of one death, I breezed through the tutorial. It wasn’t until one mission, the damn Detroit Police Station mission that made me reach anger to the level of Angry Video Game Nerd proportions.

Fearing that attacking cops would end up giving me a bad reputation in Detroit, meaning that moving through the streets would result in constant attacks, I tried to sneak by them every chance I could. But with no abilities to see where guards are (aside from the obvious radar,) every action I took ended up with the radar saying "HOSTILE." Open a vent…HOSTILE! Peek out a corner….HOSTILE! Hell, even take one step…HOSTILE!

The frustration took a whole new level when I had to go out the way I came to complete the mission. Yes, before you all tell me I know about a secret passageway through the sewers but I did not have a high enough hacking skill level to get through at the time, so I had to sneak by their office again to get out. But there was always one guard who saw me no matter what I did. Even when I moved as discretely as possible, hugging the wall so he could not see me. One step later…HOSTILE!

Eventually I said "screw it" and went guns blazing, but even then I started to notice another problem I have with shooters. It is something I refer to as the "Perfect Dark Headshot." When I played Perfect Dark Zero, I made a clean head shot, only to watch the target get up and kill me as if nothing happened. Deus Ex seemed to have that problem as well, and the frustration really started to stack up. And the addition of boss fights didn’t help out any more, especially when the first boss will not let you even have a chance to regain your health. Eventually I found out his weakness but my patience was very thin by then.

Now if I was any other review site (namely those who ripped Duke Nukem Forever after playing for only one hour) I would have just tossed the game aside or send it back to Gamefly, but I persevered.

Moving to China helped make the game a bit more enjoyable. But it was when I obtained new augmentations that really helped out my gameplay that the fun started to improve. The augmentation that helped me more than anything else was the enhanced vision allowing me to see through walls.

Now I wouldn’t have to worry about being ambushed without warning. I was prepared. Using the Social Analyzer made the conversations more intriguing and easier to figure out. And my favorite part of the game, the hacking, just got more and more enjoyable as my skills leveled up. It got to the point where I did not even have to use my stop worms or nuke viruses to beat even the most difficult Level 5 security.

Eventually I enjoyed the game a lot more than what I thought, and when I finally finished the game, I did not want it to the end. Even with seeing all four endings, as well as the surprise at the end, I wanted more.

But Pritchard, I have to ask you this. Why? Dear God, WHY? Why must you have a Final Fantasy XXVII poster in your office? That alone proves to me that the future really does look bleak!

Waiting For: Gears of War 3 (360, if a certain Game Store doesn’t pull out their usual "Memphis Warehouse" card.)