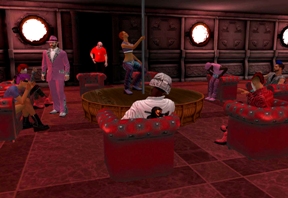 So our stupidly bad Time Waster this week is CrimeCraft: Bleedout. The Bleedout part of the title is in there because this is an expansion to the original CrimeCraft that adds oodles of extra goodies (my nose just grew an inch!). I on the other hand hoped that Bleedout meant that the game was dying because surely it can’t last much longer.

My problem with CrimeCraft is…well okay there are a lot of problems, but for me they started as soon as I began playing the game. As with all MMO’s the beginning of the game starts with creating a character. The problem is that the character customization is about as limited as it gets. Let’s look at choosing gender for example. All female options for character customization in the game leave the player looking like a slut. Being a guy isn’t much better either since all of customizations for him will leave the player looking like a douche. Don’t get me wrong here, I understand that the game is going for the whole "ghetto" feel but would it really hurt to add more options so that I didn’t have to choose between jaw line scruff one or jaw line scruff two?

Okay so character customization is a wreck, but what about the gameplay?

Well, it doesn’t get much better my friends. The core gameplay is in the form of a third person shooter. Except that it’s an MMO, it’s strangely stupid. See, like all third person shooters you point and shoot. The only problem is that the controls weren’t fine tuned enough to actually make this a good shooter. Everything just feels somewhat sluggish and inaccurate. To make matters even worse the gameplay outside of shooting people is that of your typical free MMO. This means that the game lacks anything called interesting gameplay. Worse is the fact that the game tries to use the typical MMO HUD for the third person shooting. Here is an example, you’re gunning down another player and see someone else coming around the corner. You’re low on ammo and know you can’t finish him/her so you try to throw a grenade. Problem is you just hit the "G" button, which in any other shooter would make sense. Now you’re lying on the ground dead. Since grenades count as a skill you were supposed to hit F1 to use them. This is why these two genres of games should not mix.

The final problem I want to talk about though is one of the most important aspects of an Online game, the community and boy is CrimeCraft lacking in this department. It isn’t that the game doesn’t have many players; I’d actually say it’s got about the normal amount for a piece of trash MMO. The problem is that everyone I’ve run into in PvP feels like AI from 1997. If I’m hiding in a corner holding a shotgun (a level one shotgun that kills in one hit mind you) why oh why is every single person going to make it their personal freaking goal of the match to assault my corner? It gets even worse when I stop and think about the fact that not a single grenade was chucked at me and that everyone who did make an attempt on my life thought it would be appropriate to use a pistol! Another problem that made this even worse was the horribly bad spawn system in the game. There was a spawn point directly in front of my hiding spot so some poor players would spawn not even a foot in front of me and facing away from my direction. Sure it made easy picking for me but that’s doesn’t excuse the fact that it’s bad game design!

At the end of the day save yourself some time and trouble and do not play CrimeCraft: Bleedout. I guess you could, but then you’ll just sit back and say "Why didn’t I listen to Billy?"

CrimeCraft: Bleed out earns itself 1 Gin Gem out of 5.