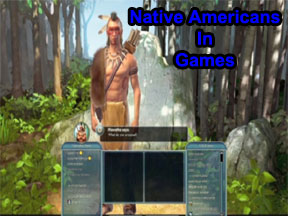 How Native People Are Portrayed In Games

Elizabeth Lameman came to our attention after someone posted a link to a video she’d made, "Native Representations in Video Games," to the Game Industry News Facebook Group. In the video, Lameman makes the case that developers don’t often present Native Americans in a positive light, and that when they do try it’s in a very stereotypical way that reinforces existing beliefs about Native Americans that are untrue.

Lameman is a writer specializing in addressing Indigenous determination in media. She has written extensively on the subject and for video games and has completed her coursework for her doctorate in Interactive Arts and Technology in Vancouver, BC.

Her video on the subject can be seen here.

GiN: Tell us a bit about your project? What inspired your video? Was there a single event that motivated you?

Lameman: I started writing and presenting on Native representations in games around eight years ago. As a Native girl gamer, I grew up looking for characters to identify with. With so few female player characters, I clung to games like Turok that, although cheesy, portrayed Natives wielding futuristic technology instead of being neo-luddites and cannon fodder for cowboys. Talking about it wasn’t enough, so I played with modding and eventually ended up as a game writer and consultant.

This video is a nod to that context I work in while I look ahead to a future where more Indigenous people are involved in game development. I meant for it to quickly expose people to information without imposing many of my own opinions.

GiN: What do you think drives this sort of portrayal of Native Americans in games?

Lameman: Most developers mean well but don’t have the knowledge to understand what is offensive about their representations. In many cases, they’re basing imagery off of other media like film, which has a long history of misrepresentation and appropriation of Indigenous cultures. It causes an erasure or misrepresentation of our languages, our stories, our communal knowledge. Without having Indigenous people involved in development, there’s no way for the representations to be self-determined.

GiN: So you think it’s a matter of cultural layering? That stereotypes of Indigenous peoples in games comes from other media?

Lameman: Developers without connections to Indigenous culture have nothing to go off of other than what has been printed in history books and literature or shown in media such as film. Unless they’re using
sources from Indigenous peoples, they’re going off of material that usually misrepresents or appropriates Indigenous cultures. The best option is to bring in a consultant or make an effort for diversity in their team.

GiN: Is it just Native Americans or is the industry in that habit of using these types of stereotypes across all ethnic lines?

Lameman: Games are filled with stereotypes of all kinds. Hey, I’m a woman too, so I’m all too aware. This is because emphasis has been put on the Caucasian male market, although no one can deny that the audience for games has been diversifying for a while now and industry has been responding. Companies like BioWare are making an active effort for diversity in their games.

GiN: How is BioWare doing so? And can you point to any other developers?

Lameman: BioWare has made it a focus to put diverse characters in their games. Not only in terms of race, but also sexual orientation, gender, and age. Because of their emphasis on player character customization, say
in Mass Effect 2, the player also has a wide range of options for representation. Conversely, you have games like Fallout 3, which make the mistake of naming races in player character customization, so when they overlook having a Native option, the game suggests, probably unintentionally, that Native people don’t survive.

GiN: What is the solution? How does the industry change the habit of stereotyping Native Americans and others in games?

Lameman: What makes Indigenous representation different is that our cultures are often misinterpreted as a thing of the past-museum relics. We’re fighting to change stories in media like film by making them
ourselves. Games are another way to represent ourselves and very exciting in my opinion because we can do things like represent Blackfoot physics in a game engine. However, to get to that point, we need access to tools and education. We need to take the technology into our own hands and use it for our means.

GiN: Is anyone trying to do anything interesting on the subject?

Lameman: There are inspiring groups like Aboriginal Territories in Cyberspace, which runs game development workshops for youth. The imagineNATIVE Film + Media Arts Festival, which is the leading Indigenous media festival, sponsored a machinima workshop last year. Plus there are independent developers and individuals who are constantly learning and reflecting on the representations they want to see changed. The key here is that we keep going. We learn, we share, we make.

We need to ask questions that are difficult to answer, like how we can step beyond representations and to our knowledge. With games, we have the opportunity to give players an Indigenous experience. What would that be? It’s my belief that these are unique to each tribe, nation, band, peoples. It’s not just about having a Native character in a game wearing the right kind of clothing. It’s about experiencing
stories in our way, which involves respecting Indigenous perspectives on things like physics, environmental science, and time in the mechanics just as much as story and aesthetics.

GiN: How could anyone interested get in touch with some of these groups?

Most diversity shifts are happening in gender. Groups like Women in Games Vancouver and Women In Games International support not only games for women, but getting more women in industry. They are building a good model of mentorship and resources that could be adapted for other forms of diversity.