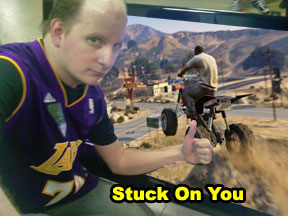 But A Few Flaws Sill Need Fixed, Especially With Online

What a difference two weeks makes.

When Grand Theft Auto V cam out, I admit I wasn’t expecting much of an improvement from GTA IV. Yes I know I was burned out with the franchise. I guess it was the rather somber tone that IV made compared to the rest of the series, as well as the somewhat depressing ending. It just left me feeling empty.

Oh and of course, the constant nagging by Roman when we wants me to go bowling with him! I’ll put it this way. After GTA IV’s main storyline, I couldn’t even get myself to complete both expansion packs: The Lost and the Damned and The Ballad of Gay Tony. Yes I played them a bit but lost all interest.

So yeah, GTA finally arrived thanks to Gamefly and I gave it a chance. And after thirty plus hours of gameplay to finish the main story line, I will say this… Yes, Grand Theft Auto is great. Yes it is a strong candidate for Game of the Year. Yes it was well worth the wait. Yes, it is much funnier and more entertaining that GTA IV. Yes, the ending is much more rewarding (at least the ending I got.) Yes, Trevor Phillips might be one of the most insane leads I ever had the opportunity to play as. And most importantly, yes I am so happy I did not get repeated calls from anyone to go bowling.

And yes, if I reviewed Grand Theft Auto V, I would easily give it 5 out of 5 GiN Gems. BUT I will do so with saying this. Contrary to those who attacked Carolyn Petit from Gamespot and Greg Tito from The Escapist for their reviews, I have to say the game is not perfect by a long shot.

That is somewhat of a stretch to say. No game can be considered perfect. Even masterpieces such as Ocarina of Time and Metal Gear Solid have their flaws. In fact, my belief is a game can only be considered perfect if Ben "Yahtzee" Croshaw of Zero Punctuation can find nothing to complain about.

But why is it not perfect in my opinion? Well for one thing, all three characters are clumsy. In past games, even going as far back as GTA San Andreas, when I wanted my character to make a running jump up a chain link fence or a low wall and climb it, they would do so easily. Not in GTA V, as they tend to stumble and take their own sweet time standing up, or worse yet, bounce off the wall with a loud "oof."

Then there is the garage glitch. I’m sure you have this problem as well. I get a brand new Infernus, take it to Los Santos Customs, and max it out to top shape. Afterwards I take it to my garage to use later, only to find it missing. Rockstar has admitted to this glitch, but I have not seen it addressed.

Another problem I noticed involves 360 owners such as myself. The game comes packed on two discs. One needs to be installed on the hard drive (an 8 GB install) while the other needs to be played from the disc. When a huge game the scope of GTA V is released I like to install it so it loads faster and reduces wear on the disc. However, because of the way the game is streamed, Rockstar recommends that both discs should not be installed. I did, however, thanks to Eurogamer, come up with a loophole that worked out quite well: installing the play disc on an external hard drive I originally used for my Wii U and it loads the game much faster than planned.

However, there is also a worse condition that owners of older 360 consoles are dealing with. According to Kotaku, first generation (new and refurbished) 360s cause GTA V to crash. Thankfully I never had this issue as I own a 250 GB 360 S, but I still have to wonder about those who still own the original model (and yes, they do exist.) Did Rockstar ever consider the issues they are going through when it came to beta testing, or did they decide that the 360 is not as important to their overall scheme as the PS3? Maybe that’s why they are only advertising the PS3 version on television and ignoring those who own a 360, let alone the fact they will not release GTA V on the PC.

So yes, I know again I will get a lot of hate mail for my comments, but I know it will be under the assumption that I hate GTA V. I love GTA V, and yes it is a strong Game of the Year candidate. It’s just that there are issues that need to be addressed, and with GTA Online launching in a pretty flawed way where I’ve not even been able to connect successfully yet, one would think they would fix the old and the new. I really hope they get this taken care of, and at least realize the Xbox 360 version DOES exist and not ignore those who own them.

Currently Playing: GTA V Single Player (360, STILL NOT a PS3 exclusive, contrary to what Rockstar wants you to think!)