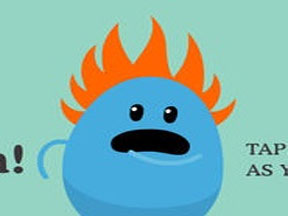 Remember the popular YouTube video ‘Dumb Ways to Die?’ The video has gotten over $59 million views on YouTube. If you haven’t watched the video then I advise you to before reading this review. The video was a public service announcement from Metro Trains warning people about the danger of not being careful around trains. Metro Trains has extended its public service announcement to include mobile games now.

Dumb Ways to Die is a game that requires players to save characters from dying the same way they do in various scenes from the video. The games include swatting bees away from characters, defending someone’s private parts from hungry piranhas and putting out a character’s hair that has been set on fire. The games come in the forms of quick mini-games. These mini-games take only seconds to complete and there are a total of 15 of them. The mini-games continue to speed up and get harder the longer a player goes without losing a life. Dumb Ways to Die plays a lot like Wario Ware, actually it pretty much is Wario Ware with a different skin.

The whole point of Dumb Ways to Die is for players to beat scores that they have previously set. Reaching certain score checkpoints will unlock new characters from the video. Each of these characters shows up at the train station injured in the ways that they were in the video, such as missing both their kidneys from selling them on the internet or having been bitten in half by a grizzly bear. The ability to unlock more characters for the train station adds some replay ability to the game, but honestly, the mini-games were fun enough that I didn’t need a goal to keep me coming back to the game.

Visuals in Dumb Ways to Die are pretty nice. All of the characters look exactly like they do in the video. The backgrounds in the game are really simple, only being one color. The lack of details may throw some off, but I felt that it made for fewer distractions while playing the game. Even if the game did have detailed backgrounds, the mini-games go by so fast that those details would be missed.

Audio is Dumb Ways to Die is great. The game’s menus and main screen uses an 8-bit version of the song that is played during the video. A slightly less electronic sounding version of the song plays during the game. This song starts out slow, but it continues to get faster the farther a player gets in the game. The sped up music was a nice touch that kept the game feeling frantic even after the game has been played a few times.

I really enjoyed Dumb Ways to Die and found myself playing it whenever I got the chance. I pulled out my phone to play it in the doctor’s office and while waiting for Alia to pick out a new pair of boots at a shoe store (she never did find a pair that she liked). I can easily say that I’ve played Dumb Ways to Die more in this week than some games that say on my hone for weeks. The visuals in Dumb Ways to Die are nice and the audio is great to listen to. Overall, Dumb Ways to Die is a great way to waste some time.

Dumb Ways to Die earns Five Gin Gems out of 5!