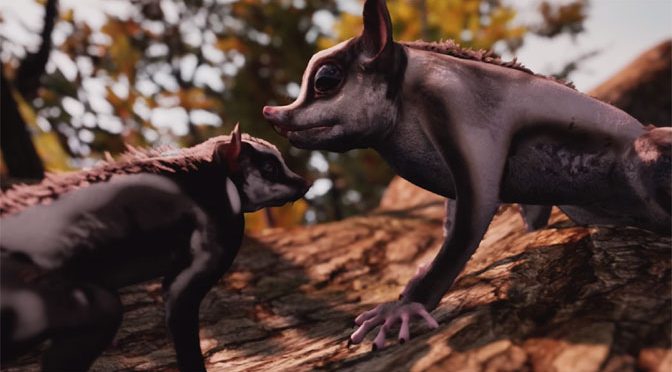 With the recent releases of Endling – Extinction Is Forever and Stray, I thought I would continue with that theme for this week’s Fresh Look Column and dive into other games animal lovers might enjoy. I won’t discuss Endling or Stray, as full game reviews for these games are right around the corner. Instead, I will talk about a few other games that might catch the fancy of animal lovers looking to continue to scratch their itch.

Away: The Survival Series

Have you ever wanted to see what it would be like to be one of the animals in a nature documentary? If so, Away is the game for you. Released last September for PC and PlayStation 4 and 5, Away lets you experience the life of a sugar glider. The game’s vibe feels very similar to Endling, as you have to hunt for food and avoid predators. True to the nature documentary format, a narrator punctuates game play with commentary on animal behavior. While you start out as a sugar glider, you can play as other animals as well, such as lizards, beetles, and crabs. These additional animals are hidden throughout gameplay.  The graphics and audio are very realistic. However, players have complained about the game being buggy. Although Away has meh reviews, the game is reasonably priced at $19.99 on Steam and $29.99 on the PlayStation store. I personally like a lot of games critics turn their noses up at, so I wouldn’t be afraid to give Away a try. Away is set to come out for the Xbox later this year.

I’m still not sure why this game is titled Cat Quest when the story involves dogs just as much as cats, but I have been consumed by this game for the past few weeks. Gameplay is simple, and the music is catchy. You play as either a cat or a dog whose respective kingdoms are at war with each other. Using the power of friendship (yes, it’s one of those games), you work to defeat the evil kings and restore peace to the land. You can switch between either character at any time, and if your character dies you automatically switch to the other character. This feature is nice because you can continue to play going back and forth reviving whatever character is currently down. This makes the game very easy most of the time.

I found Cat Quest II in the Apple Arcade store when I first bought my iPad a few months ago. I was stuck on a mission, so I set the game down for a month or so. It was a mission where you were isolated from the main area, so you couldn’t grind to level up. After picking the game back up and managing to defeat the boss, I could hardly put the game down. There are dozens of side missions filled to the brim with “terripurr” puns and blatant insertions of cat and dog references. (If you thought that was bad, I assure you they get worse than that.) The game is cute and entertaining, so I’ll cut it some leash slack. Cat Quest II was released in 2017 and looks to be available on all gaming platforms now. Cat Quest II has pretty good reviews and is priced very low. Both Cat Quest and Cat Quest II are currently on sale in the PlayStation store until August 18, but both games go for less than $15 each normally across different platforms.

Tunic is another adventure game that has you play as an adorable, animated canine. You are a fox who is wearing a tunic, so the game gets points right away for the title being accurate, albeit only slightly more original than calling the game “Fox”. Stranded on an island with unintelligible signs, you have to battle monsters and uncover the secrets of the land. Mysterious pages from a manual style document are strewn across the environment and must be deciphered to understand game play mechanics such as upgrading your weapons. From secret passageways and hidden chests, Tunic is all about exploration. Players have likened Tunic to a mash up of Legend of Zelda and Dark Souls. The game has received very favorable reviews, with some players going as far as suggesting it could be the game of the year. Tunic was released for PC and Xbox earlier this year and is scheduled to make its way to the PlayStation at the end of September. At $29.99, Tunic seems to be well worth the price. I’ll definitely be picking up this game when the PlayStation release drops.

Spirit of the North

Game developers must really like foxes because Spirit of the North is yet another game on this list that features a fox as the protagonist. Spirit of the North is an exploration/puzzle adventure game. Set in Iceland and full of mythology, the graphics remind me of the Horizon games. Spirit of the North was originally released in 2019 and is now available on all gaming platforms. With mixed reviews, players are polarized in their opinions about Spirit of the North. Spirit of the North is priced at $19.99 or $24.99 depending on the platform. The enhanced edition for the PlayStation 5 is on sale for $12.49. This is a game I would try and wait until it went on sale to buy due to some of the negative reviews about a boring storyline and buggy game play.

When looking for animal POV games, Okami makes just about every top-rated list for that topic. Released in 2006 for PlayStation 2, Okami has survived the test of time and has been rereleased for the PlayStation 4, Xbox One, and Nintendo Switch. Reviews for the game remain highly favorable. While most of the animal games listed can be completed in less than 10 hours, Okami’s gameplay can last up to 30+ hours for main quest gameplay and 50+ hours for full completion. The graphics are not overwhelmingly breathtaking IMO, but are quaint and pleasant in their watercolor Japanese Ukiyo-e style. At $19.99 across all the major gaming platforms, Okami HD is definitely a game animal lovers should check out.

There are several other animal-based titles I would like to discuss, but for the sake of brevity I will end it here. Come back next time to discover even more games where animals take center stage.

Let me know in the comments if you’ve tried any of these games and also if I’ve missed one of your favorite animal titles. Until the next time, stay cool, be you. Bye!