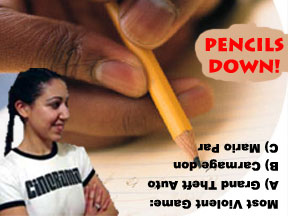 I had to check that it wasn't April Fools Day for this news story, although judging by the current state of the British weather; we could definitely be experiencing the most ferocious April showers ever. The news story I refer to dear play chums, is the one regarding Government plans to make the history of games part of the school syllabus. Well, you certainly can't say the British government isn't behind the games industry.

Vaguely ludicrous is a phrase that springs to mind. And just wait until the Daily Mail gets hold of this one – they'll have a field day with frothing at the mouth headlines regarding ‘poisoning the minds of our children'.

Today's announcement revealed that school pupils will be able to learn the history of games (that won't take long then) at school. The media diploma will be equivalent to a GCSE or A-Level (British school examinations). The plans will allow 14 year-old students to examine ‘the historical development of computer games' as part of a school media course.

In addition Sixth-formers (high school seniors) will be able to complete a media studies Diploma, which will require them to ‘critically respond to a range of computer games'. The students will discuss the games and why enthusiasts like playing them.

Schools Secretary, Ed Balls made the announcement and said, "I want to see the brightest and the best taking diplomas, which will give them more choice and allow them to get the careers they really want," said Balls.

"I'm confident that when people study the draft content now available, they will see how far we've come in developing a credible alternative for all young people."

I know the UK needs to forge a hotbed of home-grown talent to secure the future of the development industry, but I'm not sure this is the way to do it. Surely, we want an industry furnished with highly qualified, intelligent and enthusiastic individuals, not a bunch of pseudo intellectuals who can whine about the shortcomings of a game without knowing what to do to improve it.

Now, call me Little Miss Traditionalist if you must, but I don't hold much of a torch up to these new fangled school subjects. Do pupils really learn anything by doing a GCSE in Media Studies? Surely, aged 14 to 16 we should still be concentrating on traditional subjects like history, biology, literature and mathematics. Since Labour made a complete balls up (sorry Ed) of the education system, students are hardly scraping through with adequate numerical and written skills, never mind being able to give a insightful commentary into the cultural impact of Mario Kart.

I know A-Level students who've selected from the cornucopia of subjects now available, only to paint themselves into a corner. Suddenly they've discovered that animal management isn't what they thought it was, but now they're destined to manage guinea pigs at degree level. By all means include video games in media degrees, but what can a school kid take into the real world, after conjugating the verb to frag?

The games industry needs support at degree level and this is already happening, with a host of sponsored courses and placement opportunities for undergraduates. The other thing the games industry needs is budding developers with a good grounding in physics, math, art and creative thinking. We need creative people with a great command of language to champion the industry, write great scripts and bring gaming to a whole new audience.

What we don't need is some mal-educated noodle heads who don't know their arse from their elbow.