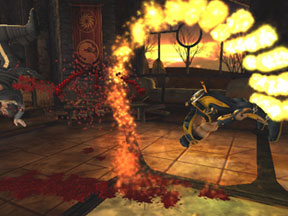 Looking at the ERSB rating of games today brings to mind the original Mortal Kombat, a game I played on my Sega Genesis as a young kid. It was great watching the gore and blood spraying all over the screen as my friends and I battled it out, finishing off one another with gruesome fatalities. The first three Mortal Kombat games were the best entertainment when it came to two-player fighters, bringing about some of the first avocations against violence in video games. Today tells a different story. Blood just doesn’t offend like it used to, and now that just about every game released sports an M on the front cover, the Mortal Kombat legacy is dying.

The latest in the series is Mortal Kombat: Armageddon, available on the Xbox, PS2, and now the Wii. This review covers the Wii version, which has been adapted to use the wiimote and nunchuck, but can also be played with the classic or Gamecube controllers for a more traditional feel.

Unfortunately, and we know this is becoming a common issue with games, the use of the wiimote is not extensive. Only three hand gestures are required to master the moves of every character, while the rest of the grapples, kicks, and punches are accomplished with the A button and D-pad.

The nunchuck is for moving with its Z button used for blocking and C button to change your fighting style. This was extremely disappointing since a fighting game like Mortal Kombat could make some serious use out of the Wii controllers.

This problem of repetitive motions is only worsened by the fact that Armageddon features nearly every character from Mortal Kombat history. The fighting styles of the 63 characters are almost all the same, seeing as most of the newer characters were built off the original fighters. A fireball is a fireball, no matter what color it is…

Anyways, each character is limited to two fighting styles in Armageddon, and the only real variation in playing one character versus another is the type of weapon they carry. Accompany this with the fact that every special move is done the same way, and you find yourself calculating boredom and frustration.

The fatalities are now kreate-your-own, which means you can string together a series of moves to do your opponent in. This is alright, but just not as fun as entering in a button combo to watch as the screen fades to black for you to disfigure a body. Overall, the fighting still looks and feels the same as the past few MK releases, which really shouldn’t be the case for the Wii.

The Kombat mode of the game features the original Arcade style where you work your way up the tower to victory, plus an Endurance mode where you see how many opponents you can kill in a row without restoring your life. There is no online capability with the Wii version of the game, nor with any other Wii game to this point, so you’re limited to playing the CPU or a friend in the Versus mode if you have one. As for the stages, they are more interactive, but don’t look much different. Same with the music, which doesn’t stray from the MK realm.

If you grow tired of all 63 fighters the game offers, the creators have offered the Kreate-A-Fighter option, where you can make your own masterpiece of slaughter with a wide array of options and fighting styles to pimp out your fighter just like that sweet ride you don’t have. You can even give them a back story. In the Wii version you only have one slot for a created fighter, so make sure they’re destined for greatness.

Armageddon, in need of some good humor, even includes Motor Kombat, which is a Mario Kart style racer, featuring a few of the fighters which can race and use their special weapons which they collect on the track. While fun for a little while, there are only five very short tracks and each character only has one weapon, so the racing party dies pretty quickly. Supposedly the other versions have an online option, which might make the racing feature a little better, but on the Wii this feature only adds another 10-15 minutes of game life unless you really can’t wait for the next Mario Kart.

The final part of this game, and the true meat is the Konquest mode, providing much of the storyline to the game. You fight as Taven, who has been locked in a mountain by his parents until this time in which he is brought out to save the realms from Armageddon. You move through the different realms learning moves, collecting objects for use in the other game modes, and destroying hoards of bad guys, with occasional one-on-one fights with some other fighters who are wreaking havoc and about to start Armageddon. This Konquest mode is closer to the adventure style of MK: Shaolin Monks, but not nearly as fun and without a two-player option. Playing through this part of the game, which seems to be much of the focus of this MK release is enjoyable and provides a few hours of gameplay.

The stuff that you don’t manage to unlock through Konquest can also be bought in the Krypt, which houses all the extra stages, music, and bonus videos and features of the game. So collect all the money you can, cause Sub-Zero is an obsessive consumer and needs his outfits.

With all that, you’d think there would be enough to keep Armageddon playing for a long time, but other than the Konquest mode, this game is over in no time. I’d still rather pick up one of the first MK titles over this release.

Combos just don’t feel the same on the nunchuck and wiimote, and boring hand gestures keep the fighting on Armageddon a little bland. For a better example of a fighting game using the Wii controller well, I’d check out Dragonball Z: Budokai Tenkaichi 2. As for Mortal Kombat: Armageddon, try it out for the 360 or PS2, or rent it before you buy it.