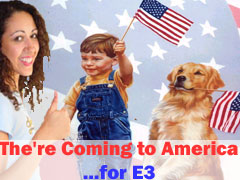 It's that time of year again and games journalists around the world are preparing for E3. In recent years, the primary form of preparation seems to be how to get through US customs without being treated like a criminal. For some reason America has an irrational fear, or maybe loathing, of journalists. And E3 makes for easy pickings for all those young customs officers wanting to chalk up a victim or two.

You US journos should count yourselves lucky. You're probably blissfully unaware of the hoops your non-American counterparts have to jump through just to make it out of the airport un-shackled. I know French/US diplomatic relations are a bit shaky, but there was no need to detain all the French games journos at last year's E3 and then plonk them on the first plane home.

Theirs is not the only tale of woe from last year's E3. One of the UK's most high profile games journos also got snagged by a wily customs officer and his shopping spree at Urban Outfitters was cut very short – in fact his Japanese import trainers never even touched American soil. After being taken to an actual police cell, he was escorted onto a plane back to London wearing a rather fetching pair of police issue bracelets.

What is it with the US and journos? I know the press are supposed to be scum of the earth in some quarters, but games journalists are probably about as dangerous as a gardening convention.

There's a world full of nervous games journos out there and they're all dreaming up paper thin lies to try and fool US customs. See, the trouble with journalists is they think they're smarter than other people. They certainly think they're smarter than some monkey in an ill-fitting uniform whose sole purpose it is to be sullen, humourless and unflinchingly tied to regulations. Journalists are spoilt and taught to think they get everything for free and that's the way the world likes it.

It seems this attitude also extends to not being arsed to sort out the right visa for E3. One has to wonder why any of those journalists hadn't gone armed with the right paperwork. We all know it's a right royal pain in the backside trying to get into the States. And that's just vacationing, never mind trying to gain entry as a journalist pretending he's not really a journalist kind of thing. What happened, did they wake up in their staff writer position and someone said, "Quick, get yer coat, we're off to LA for E3!" No warning, preparation, nothing – I guess that would explain them not having a visa.

DON'T BE STUPID! Of course that didn't happen. No, the games journo thought – E3, that's like one giant party and I always get into all the parties. No worries. Visa shmisa!

It's like shooting fish in a barrel. All the customs officials have to do is get one of those red twisty rope things and hang a sign up saying VIP and the journos will walk right into the jail cell themselves. Of course they'll complain that the bar's running low and the hors d'oeuvres aren't up to scratch.

Rather than getting the correct I visa, journalists heading for E3, seem intent on blagging their way in. So expect to see hoards of European press people wearing fake noses and silly hats in an attempt to fox US customs. "No, I'm not a journalist; it's obvious I'm a clown!" . Picture if you will a costume party of journalists dressed as Rambo, or because that's so last millennium, Wolverine (the Hugh Jackman incarnation, obviously).

Here are some of the top tips I gleaned from a gaming journalists' forum for getting through customs at E3: