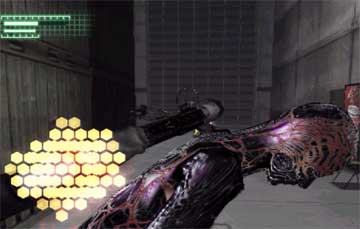 Originality is hard to come by in the gaming industry, now that the once niche hobby has turned into a multibillion-dollar business. Some publishers out there are still willing to take risks and try new ideas though, and one of those publishers is Namco. Their new titles is entitled Breakdown. It was once being touted as a first-person brawler. Now though, it’s quite obvious that Breakdown isn’t a brawler…it’s much, much more.

The first thing you’ll notice about the game is that the perspective is much different than most FPS titles. Instead of locking the camera onto the shoulder of your virtual character, Breakdown’s camera moves much more like a real person’s head would, providing a more realistic and immersive visual experience.

The game’s unique camera is utilized quite a bit in the game’s opening sequence. Taking a page out of XIII’s book, your character Derek Cole wakes up to find his memory gone and his surrounding unfamiliar. There are several scientists studying you, and in front of them is a table with a coke and a burger on it. Your body is screaming for nourishment, so you slug down the coke and then start to devour the burger. It’s then that you discover the burger is loaded with tranquilizers, and as your vision begins to fade a bunch of soldiers bust into the room. They access your state, and for reasons unbeknownst to you decide that they’re going to kill you. Of course, the main character can’t die in the very first level, so predictably someone comes to your rescue. That person is a woman named Alex, who after stylishly beating the crap out of all the soldiers, addresses you like you should know her…but you don’t.

Even though the way this scene itself plays out is interesting enough what will really enwrap you is how realistic everything looks through your character’s eyes. When you eat the burger, you actually look at it as bites slowly make the food smaller. When the tranquilizers kick in, blur effects realistically emulate what your vision would be if you were severely intoxicated. The grand finale of this scene though comes when at the end Alex forces you to vomit the tranquilizers…and you have to look down into the toilet bowl as you do so.

Though this unique perspective makes the game more immersive there are still things in the game that will take you out of the fantasy. For example, the controls at this point are not as intuitive as one would like. The game utilizes the same dual analog stick control scheme that many other FPS games on the Xbox utililize; only strafing is mapped onto the right joystick.

The game also has some other unique controls, but they work a bit more fluidly than the joystick strafing. Throughout the first level of the game you are constantly talking to Alex, where pushing one of three buttons will result in responding with one of three responses, one being to just stay silent (which is chosen automatically if you take too long to respond).

You won’t be able to talk too long however, as the game is very action-oriented so you are constantly being bombarded with enemies. Disposing of these enemies is done in a fairly traditional format, but that isn’t really a problem. Like in other games, popping a virtual skull is still something that raises blood pressure and adrenaline.

To break up the action you will occasionally have to solve a puzzle or two. The puzzles are meant to be give you only a light break however, so you’ll never spend very long on them. Most of them involve opening a door or some other form of entry, and when that happens your key to breaking through is usually pretty near, meaning there will be very little backtracking.

Beyond shooting up enemies like Al Pacino and solving simple puzzles there will also be a lot of hand-to-hand fighting. Unlike most FPSs though the fighting is not limited to just a simple punch once you waste your last round. Instead, you can link punches and kicks together with other moves in order to form long combos.

Beating your enemies’ heads into a nice bowl shape will look good too, as Breakdown’s graphics are up to snuff with some of the best shooters in the genre. The audio in the game is designed to drag you deeper into the game with large levels of ambience being delivered through Dolby 5.1 surround sound. If you have it you will hear enemies sneaking up on you from behind or even underneath you. It will keep you on your toes.