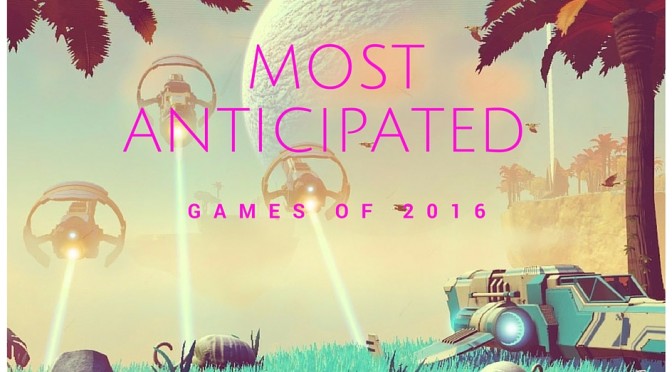 Welcome to 2016, dear play chums. 2015 was a busy year for XboxOne owners, with more exclusives coming their way, but the tables are turning for the year ahead, with lots to look forward to across all formats. I’ve picked the top 12 most anticipated games of 2016.

I could wax lyrical about the next 12 months of AAA titles, but we all know that’s not my style. My most anticipated include some big, blockbuster titles, alongside small indie gems you may not have noticed, but which prove how rich and varied this medium is.

We’re kicking off the year with intriguing indie title, Firewatch. From the team behind Telltale’s Walking Dead games, Firewatch is sure to have  an engaging story. The premise is, a man, alone in a national park watching for fires. His only contact is a woman, via radio, who is working at the next firewatch tower. Needless to say, creepy stuff starts to happen.

This is Microsoft’s third-person shooter that promises a live action, time-bending hybrid for XboxOne. A key exclusive for 2016, this could either change the face of games or make us wish it had never happened. From  the creators of Alan Wake and Max Payne, Quantum Break should be a must play, but its ambition could be its downfall.

The new year began with news of yet another delay for Nathan Drake’s final story. Moved from March, to April, Uncharted 4 promises more film quality action and offers PS4 owners a hotly anticipated exclusive. This is a series that’s big on character and action. With the creative team from The Last of Us at the helm, this time around, expect a few less laughs and maybe a few tears for Drake’s swansong.

EA’s stylish parkour game gets a sequel, giving Faith, one of the most instantly iconic characters, a new lease of life. Expect to run along walls, slide under doors and vault over anything that’s nailed down, in this game without guns.

It’s been three years since Dishonored, Bethesda’s steampunk, openworld adventure. This time, it’s got a female lead character, but other than that, it looks like a return to this slick game world, with a smidgen of magics and lots to explore. What’s not to like?

Probably the most anticipated game of 2016. We all want to know if it can live up to the hype. This procedurally generated universe promises us a vast space of candy-coloured worlds to explore. There is flora and fauna to discover, as well as an opportunity for space battles. This looks a game you can sink into to forget the real world’s going to hell in a handcart.

Strangely enough, there aren’t that many cyberpunk games about, so I’m looking forward to the next in the Deus Ex series. It’s suffered from delays, but looks like a great addition to the 2016 line-up.

One of the big releases for XboxOne, Crackdown 3 makes the list just because it blew minds at E3 last year. With a fully destructible futuristic city to play with, powered by cloud computing, this is sure to be a crowd pleaser.

The sequel to Stoic’s heartbreaking Norse, fantasy RPG is a must play. The gorgeous art, atmospheric music and engaging story made it a highlight of 2014. Part two is supposed to be incoming in Q1 of 2016, but with console ports also coming, don’t be surprised if it slips to 2017.

If Escher created a game, this is what it would look like. Created by William Chyr, Manifold Garden has you explore a world that defies gravity, allowing you to manipulate the walls. Think Monument Valley meets Inception and you’ve got an idea of what to expect from this puzzle game.  Even if it doesn’t hit in 2016, it deserves a mention.

I hesitate to put this on my most anticipated list, because it’s become as ethereal as a will o’ the wisp. Sony assures us (sort of) that’s it’s coming in 2016. If it actually happens, expect more wistful, heart-breaking gaming set in a mystical world of a boy and his griffin-type-creature. Keep the faith.

The Legend of Zelda

Openworld Zelda. That’s pretty much all you need to know. It’s slated for WiiU, but the word on the street is that it may release on NX too in Q4 2016.

If I’ve missed some big titles off that list, it’s because I’m sticking to the games with dates or most likely to be released in 2016. Of course there are some cracking games of 2016 that only have a vague release date and some of them are too good to go without a nod, so here goes.

The honourable mentions are…

Ghost of a Tale (PS4/PC), indie medieval mouse adventure channelling Redwall and Mouse Guard. ReCore (XO), action adventure featuring a girl and her robot dog. The Gone Home team brings us Tacoma – basically Gone Home in space, so yay. Yet another PS4 exclusive for 2016, Horizon Zero Dawn – it’s got robot dinosaurs and a female lead. And  Cuphead (XO) the indie platform shooter with Felix the Cat style animation. Mass Effect: Andromeda (PS4/XO/PC) would be top of my most anticipated, if I actually believed it will be out in 2016. I’ll believe it when I see it and when I see it, it’ll make my day.

What have I missed? Let me know in the comments, but most of all, enjoy 2016.