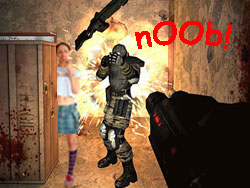 I've made no secret of the fact that I don't play on Xbox Live, dear play chums. I'll make no apologies for the fact that I don't want to spend my leisure time being called a "gay n00b" by 14-year old boys from somewhere in the Midwest. I'm perfectly okay with the fact that I can't annihilate every gamer who crosses my path and in fact, it's not something that will bring my life meaning. Maybe it's because I'm a big girl, or maybe it's just because I suck, but I prefer to think that it's because I've got more stuff to do than hone my gaming to its peak, ready to take down all comers.

While we're all still in a school girl giggle about the next gen machines and the world of possibilities they offers us, I think some of us have forgotten that not everyone plays online multiplayer. When I buy a game, I'm essentially trying to amuse myself in a fairly solitary way that involves little or no communication with someone else.

A game is supposed to open up a new fantasy world, where I know how to fire an M16 and have a warped moral compass or can bounce on clouds and count mushrooms among my core friends. Yes, dear play chums it's a fantasy world, where I'm a god or sometimes a frightened girl running away from ghouls and zombies, but then turning around again when I find a shotgun.

Now imagine a world where I do know how to drift through the windiest streets of Tokyo in a pimped GTO, with only the street lights and Kanye West for company. Suddenly another car comes into view, spanks into me, sends me spinning and my race is over with derisive laughter and "eat my dust douche bag" ringing in my ears. After five minutes on the track, I've been insulted in my own living room and the worst bit is I've paid for the privilege.

Call me Miss Killjoy, but XBL just isn't my idea of fun. Although, I am tempted by the new version of Rez, I am in no way champing at the bit to get my arse kicked on Halo 3. If I want online multiplayer action I'll head on to City of Heroes or another quality MMO.

However, I'm happy for everyone to go have their Live fun, as long as the developers and the powers that be remember that it's the core game that's er" the core game. I'm afraid that the single-player game is getting sidelined in order to satisfy the need to justify online multiplayer services.

Halo is a good example of a game that lives way past its sell-by date because of its online mode and all power to it. I don't begrudge those people their downloadable maps and extra missions. However, I do worry that the quality of the single-player game will become secondary to the multi-player aspects.

As far as I'm concerned, Halo is primarily a single-player game. Sure I have fun playing the multiplayer stuff, but after about half an hour, killing fellow players over and over becomes a bit, well"repetitive. It's just not my bag. For me, it's about the story and the adventure and solving the problem set by the creators. Halo 3 was a good game, but Halo 4 is going to have to come up with something different and fresh to keep me interested. However, I feel that for many, as long as it delivers more maps and capture the flag games, it'll score high and woo the masses.

The current preoccupation with online action means that a title with a flawed main game can still get glowing reviews, based on its performance on Live. If this is the case, what happens to the people who don't want that multi-player experience? We're left with the rushed single-player and either have to put up, shut up or sign up to trade insults with teenagers.

Ultimately, I'm an antisocial so-and-so and I don't want to have to discuss tactics, give my vital statistics or make a pact to log on at the same time tomorrow. I just want to chill out, have a play, hit pause, have a shower, come back, switch off, switch on and do whatever the hell I like without being beholden to some whiny stranger screeching into my earpiece.

I'm just telling you developer types to make sure you don't forget the power and importance of the single-player game. In a world where we're in constant communication with everyone 24/7, it's nice just to open the door to that fantasy world where it's just you, the screen and your flying squadron of battle dragons.

Most played: City of Heroes