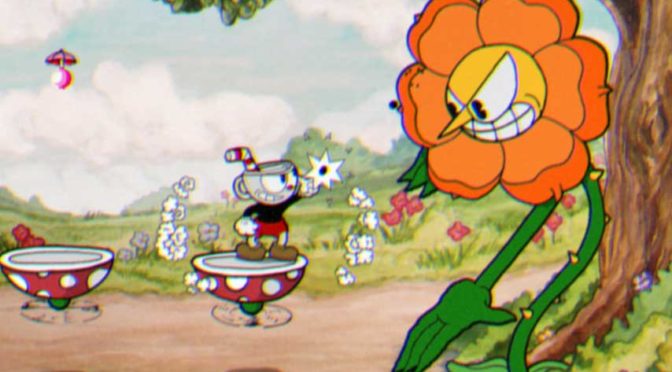 Cuphead is the long-awaited indie title for Xbox One. It looks like a 1930s cartoon and plays like an old school, side-scrolling run and gun game, with an appropriately retro difficulty level. Games were harder in the ‘olden days’ and Cuphead is made to be challenging.

All was well, until games journalist, Dean Takahashi videoed his hands-on preview at Gamescom. He mocked himself in an article and posted the video declaring that he ‘sucks at Cuphead’. It’s a mildly amusing video, thanks to the cartoon sound effects and 30s style music, as he blunders into enemies, keeps trying to do a Mario move to kill them and just, well…sucks.

A vocal portion of the gaming community decided that Takahashi’s video was a sad indictment of the state of video game journalism. His inability to breeze through the opening of Cuphead on the conference centre floor is proof that games journalists need to ‘get good’ or get out. The mob cried that Takahashi didn’t deserve his job. He was yet another games journo who didn’t even play games and just watched YouTube let’s plays to cobble together a review.

The insults came thick and fast, the video went viral and spawned cruel response videos, with more insults in every comments section. Dean thought he was sharing a funny video and everyone would laugh, like your friends do when you’re bad at a game. Dean was wrong. He was now all games journalists and he was found wanting.

Aside from another excuse for these groups to try and discredit games journalists, this whole episode is an example of the gatekeeper culture that haunts games. If you can’t play on ‘hard’, then you’re not a real gamer. If you can’t sink hours into ‘proper games’ then you’re just casual or a fake.

It’s true that games used to be hard, but that’s because games started life in the arcade and the main aim of the arcade was to get you to put more money in the machine. The best way of doing that was to make the game hard, but just fun enough that when you lost all your lives you didn’t think twice about putting another coin in the slot.

Games don’t need to do that anymore. We can just sit back, relax and enjoy them. We can choose our difficulty setting and switch it up or down for different levels because not everyone is good at every game and that’s okay.  Sure, some people wear their ‘finish everything on expert’ badge with pride, but don’t use it to berate other people with and question their enthusiasm for games.

I was at the European Women in Games Conference this week and spoke to a few developers about all sorts of things.  Of course we discussed games we’ve played, but mostly we discussed games we haven’t had time to play yet. From outside the industry, I expect people think that’s all we do, but I put a lot more hours into gaming before I started writing about them for a living  and even working on my own game. You’d be surprised at how many developers lament the lack of time to play games, but you can’t deny their love of the medium.

Journalists have the same problem. There are just too many games to ‘get good’ at all of them. I’m pretty terrible at Gran Turismo and Mario Kart,  but love a rally game. I’ve been going to dance classes since I was four, but can’t win at Dance Dance Revolution, no matter how many times I play The Bad Touch level by The Bloodhound Gang. I’ve spent hours ‘getting good’ at Ikaruga, but getting to the first save in Nier: Automata was tricky.

I’m bad at some games, but I’m still qualified to play them and offer my opinion on them. If you want the master level, no holds barred opinion, try someone else. Not all games need to be difficult to be of value. Not all journalists need to be able to do a 10-headshot-combo to be able to critique a game.

Making games hard just excludes some people, which narrows the amount of players, which means less people enjoy our passion and fewer people consider it a potential career. Adopting the ‘get good’ attitude is just a fast way to ensure we play the same games forever and that would be boring. I do want to play Cuphead though.

My advice is to enjoy games and then write about them or make them or just play them – it’s that simple.

One thought on “Cuphead video sparks ‘get good’ gamer storm”