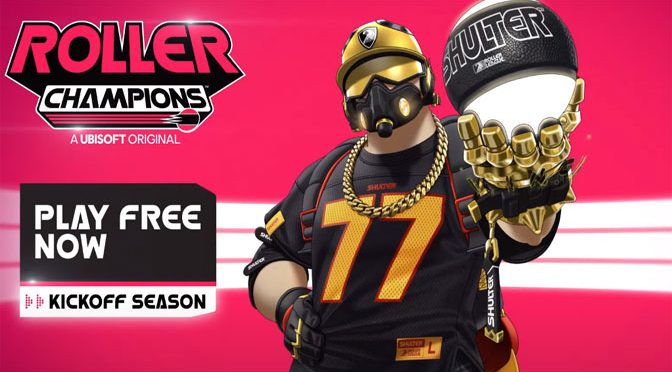 Today, Ubisoft announced that Roller Champions is now available for free with cross-play and cross-progression on Xbox One, PlayStation 4, Xbox Series X | S and PlayStation 5 (backward compatibility), as well as Windows PC through the Ubisoft Store.

In this new free-to-play, team PvP sports game, players compete against each other in teams of three, to be the first to reach five points by making arena laps and throwing the ball through the hoop. Teammates must work together, dodge, and tackle efficiently to keep ball possession and control the pace of the game. Claiming victory over opponents is the key to gaining fans and climbing up the leaderboards, all the way to the Elite Champions’ league! Along the way, cosmetic items– outfits, goal effects, air poses and much more – can be unlocked for players to fully customize their legendary athlete.

Roller Champions can be played with friends, or alone against similarly skilled opponents with the game’s cross-play matchmaking system. Profiles and progression are kept across all available platforms with the cross-progression system. Between matches, the skatepark allows players to meet up, learn new tricks and participate in mini-games together. And thanks to the Friend Referral program, inviting friends to Roller Champions unlocks rewards for both the Referee and the Referrer.

Kickoff Season is now live. Running from May 25th to June 21st, 2022, it introduces 3 arenas and two special time-limited game modes. Exclusive cosmetic items can be unlocked with the Roller Pass, a reward system split between a free and a premium track. This season, Roller Pass purchasers will be able to unlock 41 rewards by playing matches, while players choosing the free track will still be rewarded with 11 items only available until June 21st. Of course, all items acquired in this timeframe will stay in the player’s locker after the end of the season.

Lace your skates, put on your helmet and dash into the arena today by downloading Roller Champions for free.