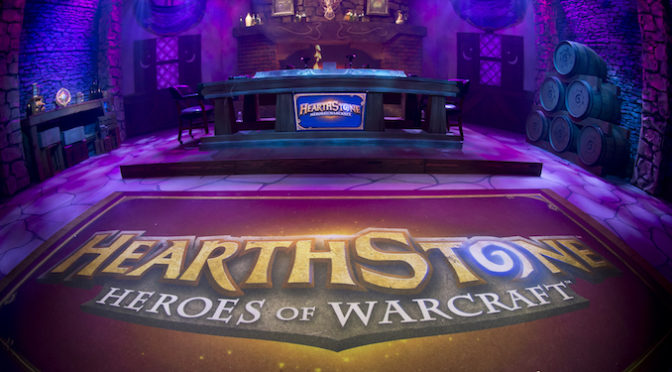 This article will present the game Hearthstone by Blizzard Entertainment, which will be holding a World Championship at BlizzCon, November 4-5 in Anaheim, CA. The group stages for the Championship begin on October 26th.

What is Hearthstone? Hearthstone is a strategy collectible card game that uses hero cards, weapon cards, spell cards,  and minion cards. The hero cards are the players card and class.  These are all based on World of Warcraft heroes. To play Hearthstone players create decks of up to thirty cards, which are specific to your hero class.  Each hero or class have special abilities unique to them.  The nine classes players can choose from are mage, shaman, druid, paladin, warlock, hunter, warrior, rogue, and priest. Each hero also has a hero power.  This power can be used to directly attack your opponents hero.

Classes are unlocked as you play against those classes. Players start out with the Mage, portrayed by Jaina Proudmoore.  Mages are spell casters having  access to balls of fire, with the Fireball card, pure arcane energy with the Arcane Explosion card, and bolts of ice with Frostbolt.  Jaina as a mage has the hero power Fireblast.  Fireblast only deals one damage.   Another hero is Rexxar, the Hunter.  He actually is my hero choice when I play.  His power is the Steady Shot, a two damage power.  Steady Shot is a powerful ability that if used constantly and  with his minions and other cards can increasingly decrease hit points each round.   Hunters also rely heavily on beast minions for board control.  This hero is good for aggressive gameplay style.   All hero powers cost two mana.

There are alternate heroes that can be unlocked by purchasing them to special promotions. These are just skins for the default hero cards and do not change their abilities. All heroes, default and alternative, come from Warcraft lore.

Hero’s start with thirty hit points. The round ends when you or your opponent hits zero hit points. The amount of hit points are identified in red, the yellow is the attack value, which is how much damage the card can deal. During your turn you can only use cards if you have the required mana. Mana is the blue crystal on top of the card and you can only use cards that have the amount of mana your hero has. You earn mana after turns.

From your deck you can choose minions who can attack other minions or the hero. They are weak and strong cards and are used to cause damage to the hero and destroy other minions protecting the hero. Taunt cards block attacks on other minions and the hero. Players must take out a Taunt before proceeding. Spell cards can be used to deal damage or debilitate an enemy, increase health or attack points, or used to draw more cards. The hero can also use weapon cards. Weapon cards are used to increase a hero’s attack and have both attack points and durability.  The weapon can be used as long as it has durability, once durability is reduced to zero the weapon is destroyed. All heroes can use weapon cards but specific classes can have weapons in their decks instead of obtaining them, for example by making a copy when it is used on them.  Classes that have direct access to weapon cards are the hunter, paladin, warrior, rogues, and shamans. A weapon card for the hunter class would be Death’s Bite that deals one damage to all minions.  This is a common card.

Cards belong to a rarity category.  These are free, common, rare, epic, and legendary.  A rarity only signifies how difficult the card is to collect with free being the easiest to earn and legendary the most difficult.

Hearthstone is played on a board with each hero on opposite sides. Each player draws cards per turn, with some cards giving players the option to draw more cards.  At the beginning of a match there is a coin toss. The winner of the coin toss draws three cards while the loser gets three plus an extra card.  The player going second also gets the coin which allows them to draw a powerful minion.

Hearthstone is a free to play game. Players can use real money to purchase new cards and decks or enter Arena mode. Arena is a game mode that has players create decks from random cards and one class from three choices. There is also no limit on how many of one card can be in a deck. Players play until they get three losses or 12 victories. Players who win games get rewards. Only players who unlock all the classes can play in the arena. Using gold can also purchase cards, which can be acquired from playing matches, winning in the arena, and completing quests.

Hearthstone has a variety of game modes, which include Arena, Play, Adventure, Friendly Challenge, and Tavern Brawl.  In Play mode players can choose between casual and ranked play.  With Casual games players can choose to go solo or play against the AI, or find other players to compete against.  The matchmaking in Casual games find players at your current level and are friendly matches. Ranked games will match players against other players to earn ranks. These ranks determine matchmaking and players gain or lose ranks depending if they win or lose matches. Ranked games occur during seasons and offer rewards for top players. After the season players go back to a lower rank. Adventure games are solo games played against the AI. These games have themes and feature specific heroes where players unlock new areas of the adventure and new bosses as they play. Players battle  bosses and class challenges using specially crafted decks. Tavern Brawls are weekly events that start on Wednesday and end the following Monday. They have sets of rules and prepared decks or random decks, all depending on the rules of that week’s Tavern Brawl. Friendly challenge is a mode where players can battle friends on their friends list. These are casual matches that offer few rewards.

In Hearthstone there are two formats, Standard and Wild. These are focused on cards that are available to use in decks. With Standard format players can only use cards from the current calendar year or from classic and basic sets. Wild format has no restrictions on card sets. Any card set is available to use and is the default type in Hearthstone.

Hearthstone itself is pretty straightforward when you start playing and is easy to pick up. The challenge comes from understanding the cards in your deck, knowing class abilities, and having a good strategy to beat your opponent. Once players have achieved a high level of proficiency in Hearthstone they may be ready to move onto competitive hearthstone. Lets now take a look at Hearthstone eSports.

When players reach legend in Standard Ranked play they earn HCT points and the higher a player is ranked the more points they get.  The Blizzard sanctioned events fall into two categories Cup or Major.  A Cup has a prize pool of less than $10,000,  more than that and they are considered Majors.  Players earn points in only weekly Cups and Majors tournaments.  Tavern Heroes are Fireside Gatherings that are part of the Hearthstone Championship Tour.  Winners will join 128 other players in their season’s Preliminary.  Fireside  Gatherings are hosted events where players meet at local venues to play matches.  There are also four regions that hold Preliminaries, Championships, and Last Calls.  They are Europe, Americas, China, and Asia Pacific regions.

Preliminaries narrow down competitors from 128 players plus those that won the Tavern Heroes to eight players who move on to the Championship.  Tournaments for the Preliminaries take place at fireside gatherings at venues around the region.  Players are then seeded according to their HCT points and not where their matches take place.   The Preliminaries were double elimination, best of five conquest format.  Players choose 4 classes and had one ban.  The championship was single elimination, best of seven conquest format with five classes and one ban.  Conquest is when players must win with one of their decks and the winner cannot reuse the winning deck.  The loser of the match can reuse the deck from that match.

In these tournaments players use decks they created on their battle.net account designated for the region they are playing.  For anyone playing Hearthstone you need a Battle.net account to play.  Championship tournaments must have standard decks and not contain wild cards. All other tournaments can include cards from any decks unless specified.

Beginning October 26th, BlizzCon opening week, the Hearthstone World Championship will begin with match one  of the group stage leading to the decider match on October 30th.  The quarterfinals are scheduled for November 4th and the semifinals and grand final on November 5th.

The final roster for the World Championship is:

For more information on BlizzCon check out the official site: https://blizzcon.com