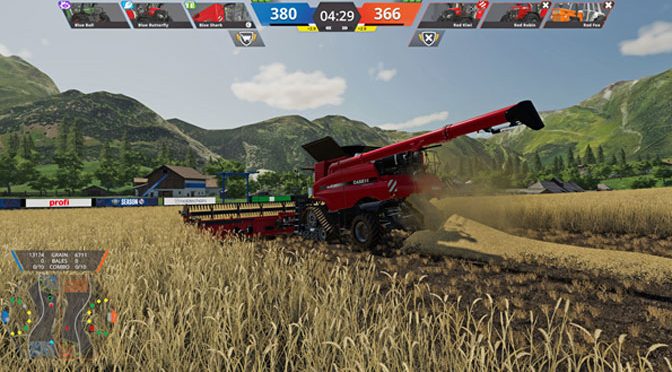 Team-based esports is back on the field: GIANTS Software kicks-off Farming Simulator League (FSL) Season 4! Season 3 winners Trelleborg return, with other teams looking to unseat the back-to-back reigning champions. Starting with the first official tournament on the weekend of May 14th to May 15th, monthly online qualifiers will conclude with the World Championship in November 2022. Live-streamed on the FSL Facebook and GIANTS Software Twitch channels, teams from all over the world can participate and compete for the prize pool of 100,000 Euros.

All qualifying tournaments in Season 4 are organized monthly as online events, and streamed live via official GIANTS Software channels. Successful teams grab their share from the 100,000 Euros prize pool at each tournament, with the largest portion at stake during the World Championship in November which has the potential to be a face-to-face event.

“We are continuously expanding the Farming Simulator universe and all related aspects, including this popular esports part”, comments Christian Ammann, CEO of GIANTS Software. “Thanks to our Season 4 partners who share the same vision to offer such a unique playground with family-friendly competition.”

GIANTS Software will look to attend other in-person events in the gaming or agricultural business with separate, stand-alone tournaments and additional prize money.

Nitrado and Noblechairs as well-known players in the gaming and esports scene, plus Profi and DLG, both renowned in the agricultural sector, are official partners of the FSL Season 4. GIANTS Software welcomes their commitment and contribution to realize this next step in the Farming Simulator esports universe. More partners will be announced shortly.

In Season 4, all participating player teams compete equally in knockout rounds in each tournament, as there are no more seeded teams. Nevertheless, renowned agricultural manufacturers (such as Valtra, Lindner) will sponsor a team to participate in this unique virtual farming experience.

Developer and publisher GIANTS Software enhanced the gameplay dynamics of its competitive multiplayer mode for Season 4 with an increased harvesting speed and several other tweaks. Teamwork is still the core of the competition, as three players have to coordinate their machine fleet efficiently. After a strategic selection of machines at the beginning, the teams harvest wheat, produce bales and quickly deliver them to the own barn for points.

The free to download Tournament Client is based on Farming Simulator 19 PC version and invites every Farming Simulator fan and esports enthusiast to register and compete. A training mode for newcomers is included.