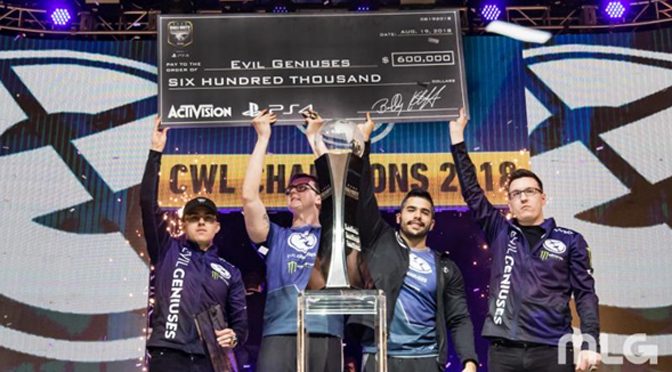 Showcasing mastery in Call of Duty: WWII, Evil Geniuses was able to fend off opponents Team Kaliber to take majority stake in the event’s $1.5 million prize pool as part of the overall $4.2 million season prize, the largest in Call of Duty Esports history. 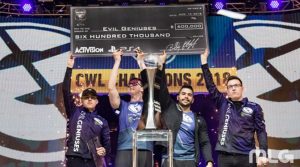 “Congratulations to Evil Geniuses on capturing the ultimate goal in Call of Duty esports, the CWL Championship,” said Rob Kostich, executive vice president and general manager, Call of Duty. “This was an incredible season for the CWL – a huge thanks to our community of players and fans. From start to finish, the matches were amazing with some of the best gameplay we’ve ever seen in the CWL leading up to last night, and throughout it all, viewership was stronger than ever, which reflects the passion and engagement of fans worldwide.”

Despite a collective effort to win the ultimate Call of Duty esports prize, Adam “Assault” Garcia stood out during the 2018 CWL Championship to be awarded the ASTRO Gaming MVP of the tournament. MVP Adam Garcia also becomes a favorite for the upcoming SCUF Gaming Team of the Week, which honors top competitors in the CWL weekly.

Fans from around the world watched Evil Geniuses hoist the trophy live on MLG.com/CallofDuty and Twitch.tv/CallofDuty, as well as within the in-game Call of Duty: WWII theater. Championship Sunday was also broadcast live on Twitter, on @CODWorldLeague.

Evil Geniuses will also be memorialized at future CWL events within the G FUEL Hall of Champions, which celebrates event victories from past events in CWL history.

Here are the final placements for the 2018 Call of Duty World League Championship: