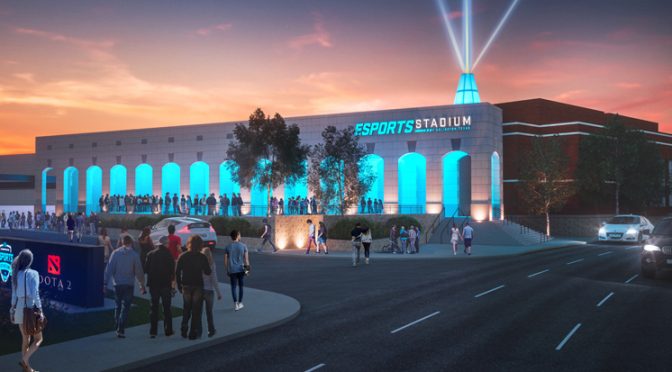 Arlington is proud to be home of the University of Texas at Arlington, Texas Rangers, Dallas Cowboys and the WNBA’s Wings. But now the City has its sights set on a different but rapidly growing corner of the sports entertainment market – competitive gaming.

The City of Arlington is excited to announce plans for a state-of-the-art esports stadium designed to draw competitive players and fans from around the world. The 100,000-square- foot space, which would be the largest and most flexible esports stadium in the country, is set to open its doors this fall in Arlington’s world-class Entertainment District.

Mayor Jeff Williams announced the City’s innovative venture with Esports Venues, LLC, during a news conference Wednesday at the Arlington Convention Center, which would become home to Esports Stadium Arlington. 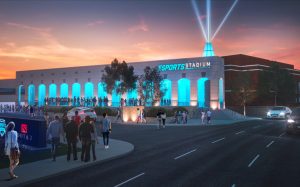 “Being on the forefront of new ideas and setting trends is in our DNA and part of who we are as The American Dream City,” Williams said. “Esports Stadium Arlington will further cement our city’s status as a national and international tourist destination. Players and fans will come here for the tournaments and they’ll stay even longer to experience everything Arlington has to offer.”

By collaborating with award-winning sports and entertainment architecture firm Populous, the City of Arlington and Esports Venues, LLC, plans to invest $10 million into the Arlington Convention Center to transform it into a stadium that offers the most immersive spectator experience in the live esports event market.

“This esports stadium will transform the Arlington Convention Center and position the city as the epicenter for esports in the heart of North America,” said Brian Mirakian, senior principal at Populous. “Esports fans will encounter a live experience unlike any other, by way of space for up to 1,000 spectators, VIP amenities and year-round event potential.”

The City’s proposed agreement with Esports Venues, LLC, includes an initial 10-year lease with a 10-year renewal option. Arlington’s renovation and equipment investments would be repaid through annual lease payments, event revenue, stadium naming rights revenue and other opportunities associated with catering to the esports industry.

“We are creating the most unique and technologically advanced space available for meetings and conventions in North Texas. The production capabilities and technological innovations being introduced to the current facility are like nothing the market has seen before,” Price said. “Arlington’s ability to deliver an elevated customer experience can only serve to expand the meeting and convention market for the city.”

The stadium will be managed by NGAGE Esports, one of the nation’s leaders in the field of entertainment marketing. NGAGE has a proven track record of working with some of the world’s biggest companies to combine social media, design, asset building, brand partnerships and activations to optimize fan engagement.

“We are extremely excited for the opening of Arlington’s esports stadium and see it as nothing short of a milestone for the industry. Our collaboration with the City of Arlington will give Texas and American esports a platform worthy of the vitality and impact it’s so swiftly developed,” said NGAGE President Jonathon Oudthone.

Arlington is already home to an active, engaged gaming community at the University of Texas at Arlington.

“We are proud of our students and pleased that they will be able to share in the events and competitions that will take place in this world-class facility just 10 minutes from campus,” said UT Arlington President Vistasp Karbhari. “I’m grateful for the wonderful collaboration that exists between UT Arlington, the city and our community and look forward to another wonderful partnership that will keep Arlington and the metroplex at the forefront of this new exciting enterprise.”

The City’s planned stadium, which displays the adaptive re-use potential of esports, would feature a major competition event space, gaming, retail and social spaces, VIP hospitality, a broadcast studio and team training areas. “I know the gaming community across the globe is going to fall in love with this stadium and with Arlington,” Mayor Williams said. “We’re ready for the biggest tournaments in the esports industry to call Arlington home.”