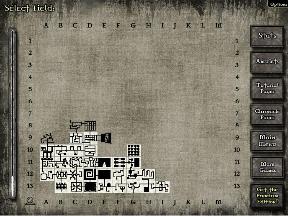 GemCraft Labyrinth is the third title in the GemCraft series. To mix up the gameplay of GemCraft Labyrinth the developers added, well a labyrinth. The fields within the labyrinth are separated in to different fields by having the horizontal axis labeled with letters A through M and the vertical field labeled with numbers 1 through 13. Travelling through the labyrinth is simple, click on the field that you wish to play and you’ll be treated to a tower defense battle. After winning the battle you will unlock different paths into the labyrinth.

For those who don’t know what a Tower Defense game is here is a brief explanation. You (the player) will have to set up towers to attack enemies as they run along pre-set paths (most of the time) and try to destroy an object of some sorts (in some games they just have to make it past the end of the screen and then they will circle around for a second go). It’s a pretty simple formula that involves some complex gameplay.

Much like a typical tower defense game there are many different types of gems that can be crafted. These range from poison gems that slowly deal damage over time, to gems that deal straight damage and everything in between.

The unique part of GemCraft is the ability to fuse together gems to create new ones. For example mixing two level one gems would create a level 2 gem, and two level two gems would create a level three gem, and so forth and so on. Not only do the gems level up when fused but also the newly created gem will contain properties of the gems used to make it. Fusing a poison gem and a chain hit gem would then create a gem that deals poison damage to multiple enemies at a time. I think you can probably see all the potential combinations that could be made.

BUT WAIT THERE’S MORE! There is a lot more you can do with gems than just placing them in towers to attack enemies. Let’s say that you have a few big enemies coming in and your towers just aren’t cutting it, and you don’t have enough mana (magical power/ money in this game) to create a new tower. Then instead you can create a gem and use it as a gem bomb! This will deal damage to all creatures in the area and becomes stronger the higher level of gem that you use for the bomb.

Along with the idea of gems getting a single use is the trap effect. Create a trap along the pathway that the enemies walk on and then place a gem in it, then wait. As the enemy walks across that square…BOOM, the gem explodes and hurts the enemy not only with damage but also with the special effect that the gems had. Doing this with slow gems is a great way to buy yourself some extra time if you feel like you’re being overrun.

The most important of all these other buildings is the amplifier. The amplifier, as its name implies amplifies other towers that surround it. So let’s put a chain hit gem in a tower, then from there we will put an amplifier beside it and place a multiple damage gem in it. Now our chain hit gem has a chance to deal critical damage every time it hits an enemy. So have towers with combined effect gems in them along with having amplifiers around them and I’m sure you can see some of the chaos that can ensue.

While setting up your wonderful gems into their towers or other devices you will be attacked by waves of enemies. As is normal to the tower defense genre these waves of monster are separated by a short amount of time to allow you to kill the previous wave. Also following the norm of tower defense is the ability to send multiple waves in at a time. This will earn you extra points and mana, so don’t be scared to send in waves early if you are defeating the enemies in the current wave way to easily.

Besides the normal fields you will also find yourself occasionally playing on "Epic Fields" these fields require you to fill a Crafting Pylon to full energy by shooting it with towers. The other special part about Epic Fields is that the waves don’t stop. Until you fill the Crafting Pylon you will be bombarded with enemies that gradually get stronger and stronger, so fill that Crafting Pylon as fast as possible.

All and all this is a fun entry into the GemCraft series that any tower defense fan should play. It you’ve never played a tower defense then you may want to find a more casual one to start you off though, as GemCraft Labyrinth is very unforgiving. For those on the iPhone don’t think your being left out. Gameinabottle (the developers of GemCraft) has announced that a version of GemCraft Labyrinth will be out for the iPhone shortly, heck by the time you read this it may already be out!