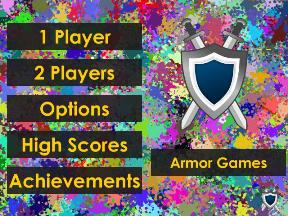 BattlePaint fits into that category of games that no matter how much it frustrates you, you’ll always come back for more. Now you might be asking yourself "Why in the world would I want to torture myself like this?" why because if you don’t how will you ever beat your previous high score?

I suppose I should probably tell you about the gameplay of the game at about this point, right? Okay then let’s get down to it. BattlePaint plays like your typical top down shooter or at least a top down shooter with a limited area to move around in. This area is set up so that it’s not so small that you can’t maneuver, but not big enough for you to have plenty of space to run, instead it’s just the right. You’ll control your block with the WASD keys and you will control the direction of your fire with the Arrow keys. It’s basic and simple stuff so no worrying about complexity here.

One small note I would like to make is that BattlePaint also has multiplayer for two people. Both people must be on the same computer and using the same keyboard though. So while it is fun to play 2 Player, you might only want to do it with a close friend. Otherwise you’ll probably feel awkward being that close to someone.

After you have gotten used to the controls you begin to be attacked by waves of enemies. Your paint filled enemies will splatter paint across the field as you kill them. This will leave the battlefield looking like a multicolored mess at times. Something fun about the game is that the paint streaks as you move over it. So while it may not be in your best interest if you are going for a high score, I found it fun to try and draw pictures or spell words while running away from the current wave of paint filled polygons.

Of course to start off the waves are really easy. As expected though waves will get harder and harder the more waves you clear. Around wave 30 is where the game will really start to step it up by sending enemies at you in different ways. One example is when the spawn points for the enemies start to follow the movement of your block. This slight change in gameplay can make for some hectic battles as you try to outrun the enemies spawning by you all while shooting the other enemies that are spawning from static locations.

BattlePaint isn’t completely merciless though. As you splatter your enemies across the field a small yellow gauge underneath you will begin to fill. When the gauge is full you will gain an upgraded shot for a short period of time. This shot is a tri blaster, with one shot coming out in front of you as normal and two other shots firing at an angle in front of you.

Now this isn’t all the upgrade does either. As mentioned before the battlefield can be a really messy place sometimes. This will make it incredibly hard to see some of our square friends coming to kill us. So the obvious solution would be to clean up the field right? Right indeed, with the upgraded shot you will now also have the ability to disperse any paint on the field that you move over. This is a life saver on so many levels later in the game when the enemies will start changing colors based on the color of the paint they are moving over.

Some text I found at one of the many screens after death stated that there are 75 waves in this game. I’d love to confirm this, but sadly I can’t. Every time I play this game I get to either level 74 or 75 and die. It has frustrated me to no end and makes me come back over and over again just so I can beat the supposed "final level". That being said I’ve wasted plenty of time on this game. Just to give you an idea, it takes about 15 minutes to make it to level 75, and I’ve been to level 74 or 75 more times than I can count on one hand. So expect to lose a lot of time on this game if you intend to beat it, or just show me up and do it in one try. Either way you’ll be sure to have fun playing BattlePaint.

Total Score: 4 Exploding Blocks of Paint out of 5!