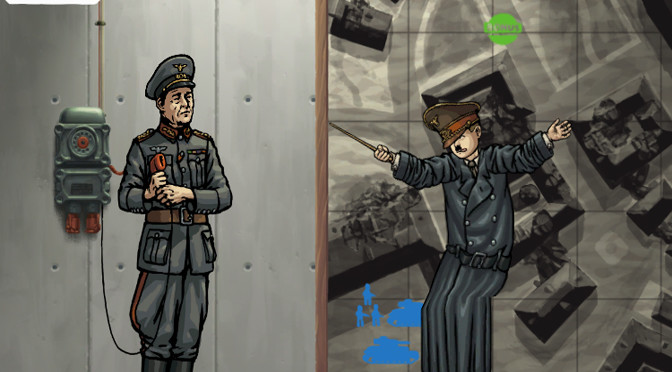 As if to cement last week’s comic about how Nazis are still prevalent in games 75 years after their reign ended, I found myself playing a game about Adolf Hitler. This game is Double Hitler.

Double Hitler is the story of two young boys who wish to enter an art academy. Unfortunately, they are too young to do this. To fulfill their dreams as artists, the boy create the persona of Adolf Hitler to enter the academy. They do this by dressing up as an adult and standing on one another’s shoulders. After their art exam, the boys long to rule the adult world.

This is probably one of the most ridiculous stories I’ve ever seen involving Nazis and Hitler. It works with the game and helps highlight the mechanics used in it, but dang is it weird.

The gameplay in Double Hitler is complex. Players move Hitler left and right with the A and D keys. However, this Hitler is two boys playing dress up, which means balance is an issue. The left and right mouse buttons are used to make the top boy lean left or right to help keep balance. Pressing the space bar sets down Hitler’s brush/pointer. After sitting these down, Hitler can paint and give directions to troops.

All of the different controls can make Double Hitler really hard to play. The first part of the game involves tracing pictures for the art exam. Later levels require the player to move Hitler around while drawing directions on a map. This works a lot like maze games and can take a good bit to get used to. Even after some time with it, these sections can be really hard to complete.

Double Hitler is all about mastering the game’s controls and using these skills. The game is fun, but hard. I’d definitely suggest giving it a play just to check out how difficult it can be and how unique the control system is.

Double Hitler is short, sort of. The game doesn’t feature many levels, but the amount of skill needed to complete these levels is so high that multiple upon multiple attempt are going to be needed to beat the game.

Graphics in Double Hitler aren’t bad. There’s a good bit of detail put into the character and the military maps. Also, the animations aren’t bad considering how wonky Hitler’s movements can be at some points in the game.

The audio in Double Hitler is nice. Simple piano tunes make up most of the game and they are depressing as all get out. However, that fits really well with the content of the game. Even sad music can be beautiful.

Overall, Double Hitler is a fun game. The gameplay and controls are really interesting. It’s a bit short, but the high difficulty levels means it can’t just be breezed through. It’s also sporting some nice graphics and audio. Not to mention, the story is weird, but enjoyable if only for its ridiculousness.